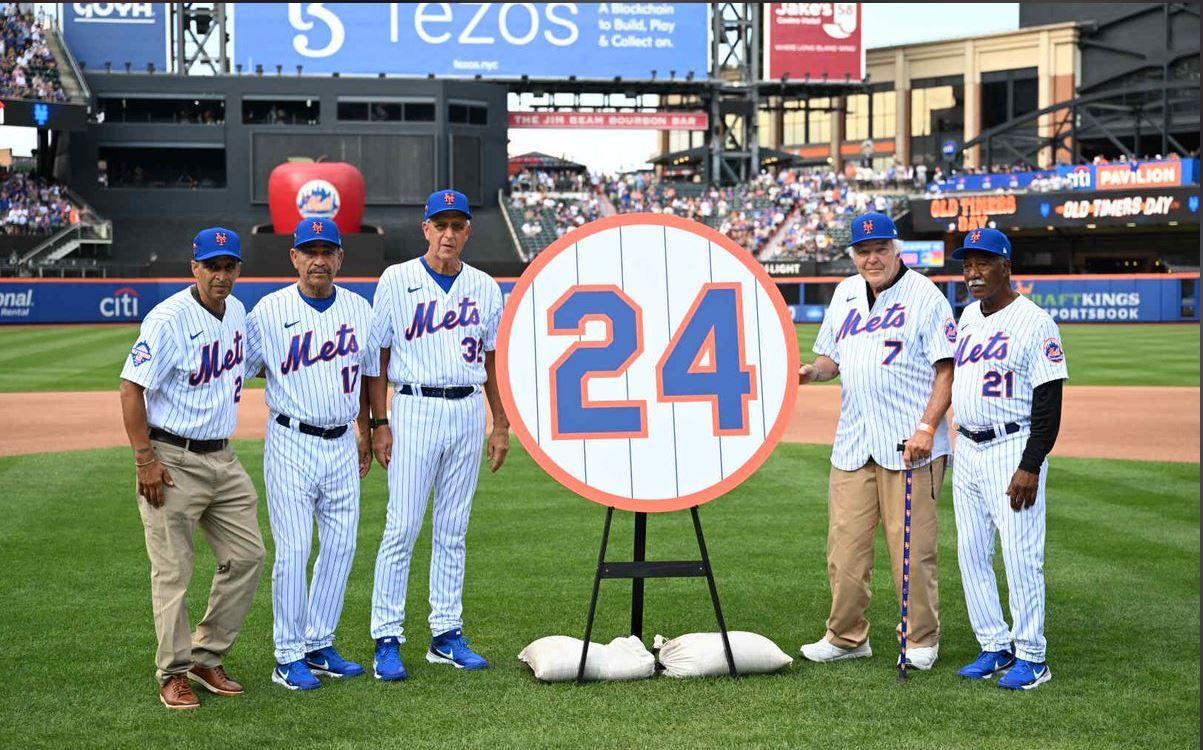 On a day when Mets fans, players and coaches old and young gathered to celebrate Old Timers’ Day, the team made a surprise announcement.

Before the Old Timers’ Day game, team broadcaster Howie Rose announced in a pregame speech that Willie Mays’ No. 24 will be retired. No Met will ever wear the number again, which was always a dream of Joan Payson, the team’s original owner who was instrumental in bringing Mays back to New York in a trade with the San Francisco Giants.

“I’m always surprised when a secret remains a secret in connection with the Mets,” team president Sandy Alderson said.

Rose read a statement prepared by Mays, who could not be in attendance but was represented by his son, Michael.

“The Mets retiring my number? Number 24? Man, that’s the best,” part of the statement read.

“We’re thrilled, this was a long time coming,” said Michael, who also threw out the first pitch before the Mets’ game on Saturday against the Rockies. “I know in his heart, this is a big deal to him, so I’m really grateful.”

The announcement elicited a huge round of applause from the packed stadium. Mays’ number will hang next to those of Tom Seaver, Jerry Koosman, Casey Stengel, Mike Piazza and Keith Hernandez. Though Mays only played two seasons for the Mets, he was an All-Star in 1973 and helped the team reach the World Series.

Cleon Jones, who played with Mays in the Mets’ outfield, gave his perspective on the Hall of Famer with 24 All-Star appearances and 660 career home runs.

“You’re talking about the greatest player to live, as far as I’m concerned,” Jones said. “Nobody could do all the things that he could do. What he brought to the clubhouse each and every day just sent a swell of confidence around the clubhouse. Willie Mays, in the room. [He’s a] guy, to me, that, as a Giant, was a giant.”

When the Giants left New York for San Francisco prior to the 1958 season, they took National League Baseball and one of the game’s best players from the city. Now, as a blue and orange 24 will hover over Citi Field for as long as it stands, the city will always have a piece of Mays with them.

“I want to thank Steve and Alex Cohen for making this day possible and embracing Mets history,” Mays said through a team press release. “New York was a magical place to play baseball.”

“There couldn’t have been a better setting for this,” Alderson said. “I think one of the most rewarding aspects of today was the number of fans who were in the ballpark. This was a great way to reintroduce Willie Mays to an entirely new set of Mets fans.”

While the members of Generation Z in attendance on Saturday may not be fully aware of the aura that he carried, those who saw Mays up close knew he was one of one.

“I was so struck by Willie that I watched him run on and off the field,” Jones shared. “It was exciting to me to see that there was somebody so talented.”

Jones also told a humorous story about watching Mays get flooded with so much fan mail that it often went ignored. This led Jones to take it upon himself to open the letters, leading to a major discovery.