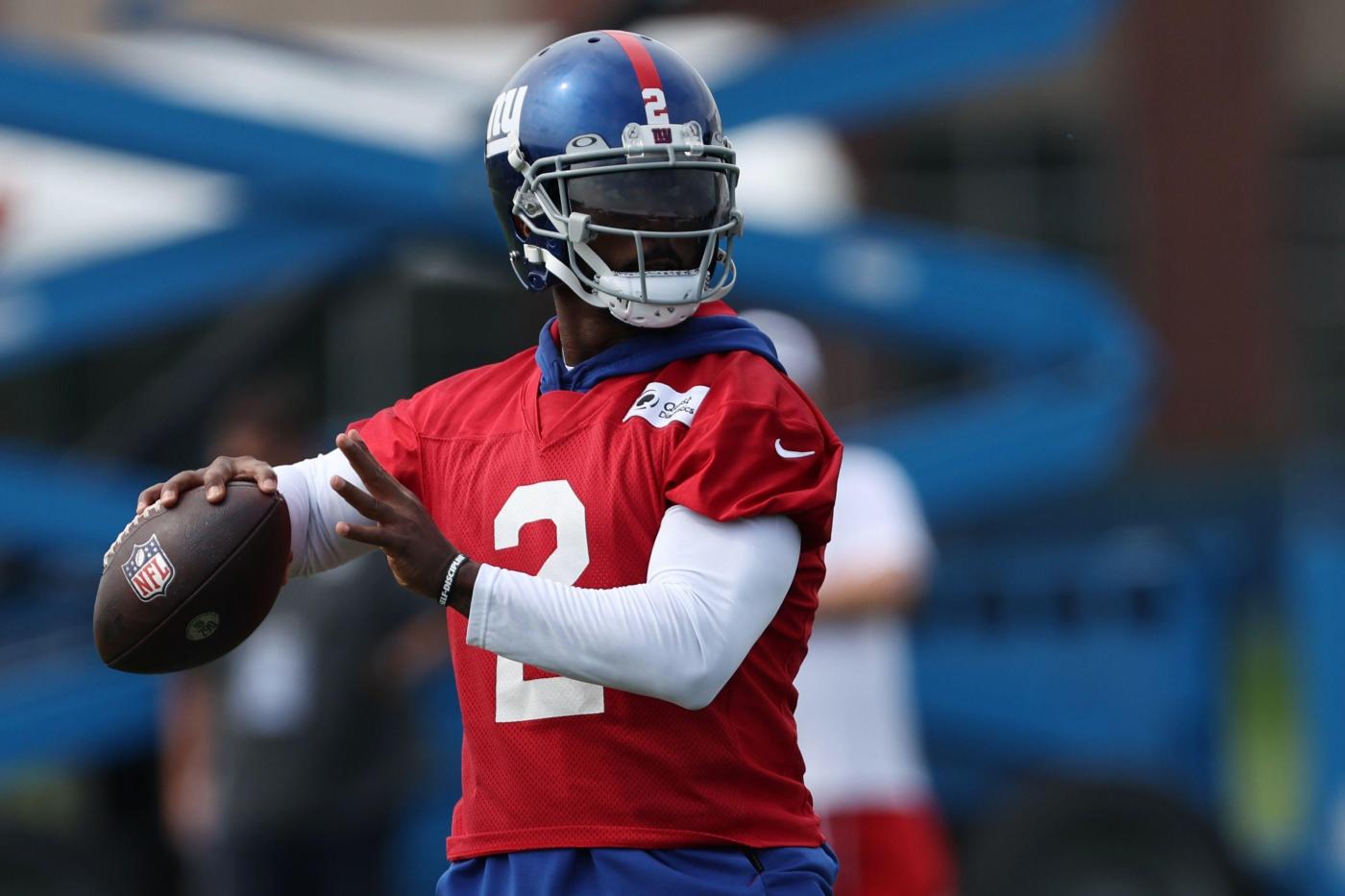 Brian Daboll has a lot to think about.

The rookie head coach is only three practices into his first Giants training camp, but Daniel Jones’ first-string offense was a mess on Friday.

Quickly it seems inevitable that at some point Daboll may need to see what his first-string offense looks like with Tyrod Taylor under center instead. Or maybe the Giants actually would entertain a trade for the San Francisco 49ers’ Jimmy Garoppolo after all.

Not that the first three days are all on Jones. Far from it.

Center Jon Feliciano’s absence on Friday, for example, produced a bad shotgun snap from fill-in Jamil Douglas that killed the third play from scrimmage with a fumble. The offense had a substitution issue on another play.

The defensive line dominated the offensive front, too, with Feliciano sidelined by what Daboll called heat and hydration issues.

Defensive lineman Dexter Lawrence was a human wrecking ball, beating right guard Mark Glowinski for a sack on one of his many pressures. Kayvon Thibodeaux got past right tackle Evan Neal for a sack in a face-off of top-10 rookie draft picks.

Leonard Williams drew a hold on Douglas. And inside linebacker Tae Crowder came in free for a sack on a blitz.

Rookie receiver Wan’Dale Robinson also dropped a contested pass over the middle, and Kadarius Toney appeared to create one incompletion because he ran the wrong route.

Toney smacked himself in the helmet after the ball hit the ground, similar to when he’d made a route-running mistake during drills 15 minutes earlier.

Jones also threw a pick-six to opportunistic slot corner Darnay Holmes on a short, telegraphed pass intended for Robinson, though. The fourth-year quarterback was inaccurate on a couple throws on the move.

The 12th-year veteran throws an extremely catchable ball. He pushes the ball down the field frequently. He makes poised checkdowns to running backs when the deep shots aren’t there.

His first three plays running the second-team offense featured a checkdown completion to running back Matt Breida, an incomplete deep shot for C.J. Board that the receiver should have caught, and an intermediate strike to Alex Bachman.

Taylor, 32, was not made available to the media, despite being requested, as he underwent his post-practice recovery regimen.

Obviously, and ideally, Daboll and GM Joe Schoen would be able to give Jones a fairly long leash to grasp this offense and execute it, now that so many of his frequently injured receivers are finally on the field.

The players still aren’t in pads, either. Those come Monday. And Jones is a relentless and diligent worker. Multiple new people in the building have told the News that Jones’ work ethic is second to none.

There is so much about him to like, as a person and player and potential long-term leader of a team. Co-owner John Mara was first in line in January putting his faith in Jones.

Mara has been on the practice field watching this unfold, however, and while he seems to accept this will be a rough season, there is no way he’ll be satisfied with a product as bad as the one he’s seen through three days.

Jones has been on notice officially since Schoen declined to pick up his fifth-year option in the spring. And Daboll’s urgency is there, too, behind his warm smile for the cameras.

Wide receiver Darius Slayton saw zero work with the first-team offense on Friday after sparing work and a bad drop the day before. Daboll said he wasn’t pleased with the amount of holding happening on the line of scrimmage late in Thursdays’ session.

The head coach even stressed that Friday’s practice was designed to put his players in stressful situations, “particularly the offense.” He knows the defense dominated the only competitive practice period of June’s minicamp, and little has changed since.

One league source familiar with Daboll’s Buffalo Bills offense also has been stressing frequently to the News that this system is complicated. There is a lot to learn and digest.

Toney raved Friday about the freedom that Daboll’s offense affords receivers in their routes compared to Jason Garrett’s last year. But Toney also was in the wrong spot at least twice in one practice on Friday.

Sure, this is the time of year to figure out what works and what doesn’t, and to make mistakes when it doesn’t count. Daboll’s system is going to have to come together quickly, however, for the end result to look competitive for Week 1 at Tennessee.

The Giants gave Taylor real money, $10.9 million guaranteed over two years. He’s not just here to sit on the sidelines if this goes sideways.

Garoppolo’s $26.9 million cap hit would make a trade to the Giants difficult, but it’s not impossible. Schoen simply would have to shed salary in return to fit him.

The rebuilding process in the NFL accepts short-term pain for long-term gain, but Mara has an evolving threshold of tolerance, as recent coaches have learned.

The plan was to give Jones a real chance this season behind a good offensive line with a healthy, talented skill group. But this looks bad early.

And plans can change.