Not so fast with gas, says Meridian Economics

If South Africa continues on its current path to install large-scale power generation from gas to replace its ageing coal-fired power stations, it would end up with electricity users paying a 40% premium compared to using increased wind and solar power, supplemented by gas only for peaking demand.

This warning comes from Meridian Economics in its latest report, aptly titled ‘Hot Air About Gas’.

The report was released on Monday (20 June), a week after the think tank released two papers showing how load shedding can be eliminated by 2024 by drastically increasing renewable energy, combined with battery storage.

This also blows out of the water the country’s Gas Master Plan, which bases the development of a gas economy on power generation to provide the anchor demand for development of the necessary gas infrastructure.

Meridian calls for the revision of the Integrated Resource Plan, which sets out the required technology mix for power generation up to 2030, and the Gas Master Plan, saying that both are based on the 2012 National Development Plan.

In the meantime Eskom announced on Monday afternoon that it will institute Stage 2 load shedding every night from Monday to Thursday between 17:00 and 22:00 this week.

The utility said 5 232 megawatts (MW) of its generation capacity is out of service due to planned maintenance and 14 202MW due to unplanned breakdowns.

In its report Meridian Economics, led by respected energy expert Dr Grové Steyn, points out that conditions have changed dramatically in the decade since the National Development Plan was released.

The price of wind and solar energy has dropped by around 50% and the imperative to reduce carbon emissions has increased, with the added pressure of possible penalties to users of electricity generated from fossil fuels.

“Energy policy that does not integrate these new economic and environmental realities will fill the power system with stranded assets and create climate risk for all electricity users,” Meridian states.

It shows that the energy demand can be met by wind and solar power supplemented by flexible, dispatchable capacity in the form of turbines or reciprocating engines run on diesel, gas or other combustible substances.

The report points out that liquified natural gas (LNG) can replace the use of diesel for peaking plants, but that would require significant infrastructure that needs to be offset over large volumes to be financially viable.

The low volume, intermittent use associated with peaking plants will further make it difficult to contract the import of LNG, which is typically done in regular cycles planned well in advance.

To force more new gas into the generation mix to provide anchor demand for gas used in other sectors will result in an increase in electricity prices as well as emissions.

According to Meridian’s model, increasing gas usage to the 50% stipulated in the Karpowership projects – which form the largest portion of government’s emergency Risk Mitigation Independent Power Producer Procurement Programme (RMIPPPP) – and up to 60% envisaged in programmes planned by Eskom and the Coega Development Corporation, may increase electricity cost by 40% compared to using gas for peaking purposes only.

Under the same conditions emissions will increase sevenfold, which will translate into penalties on products exported from South Africa.

Meridian estimates that using renewable energy supplemented with peaking capacity will save the country R6.1 billion a year, compared to using large gas as base load or mid-merit supply.

It says to justify forcing big gas into the energy mix, the benefits of doing so will have to outweigh that saving as well as:

“We have not seen any compelling analysis to suggest that upstream benefits from domestic gas use would at all be able to outweigh these benefits.”

Total cost, emissions and fuel requirement for a set of scenarios designed to meet 3 gigwatts of additional dispatchable capacity in the South African power system: 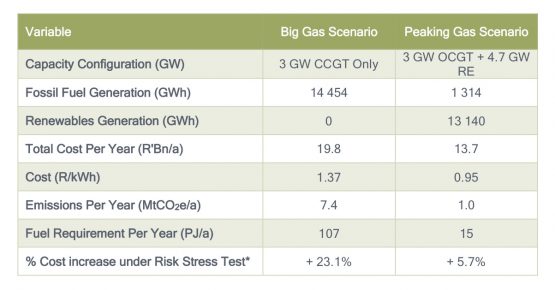