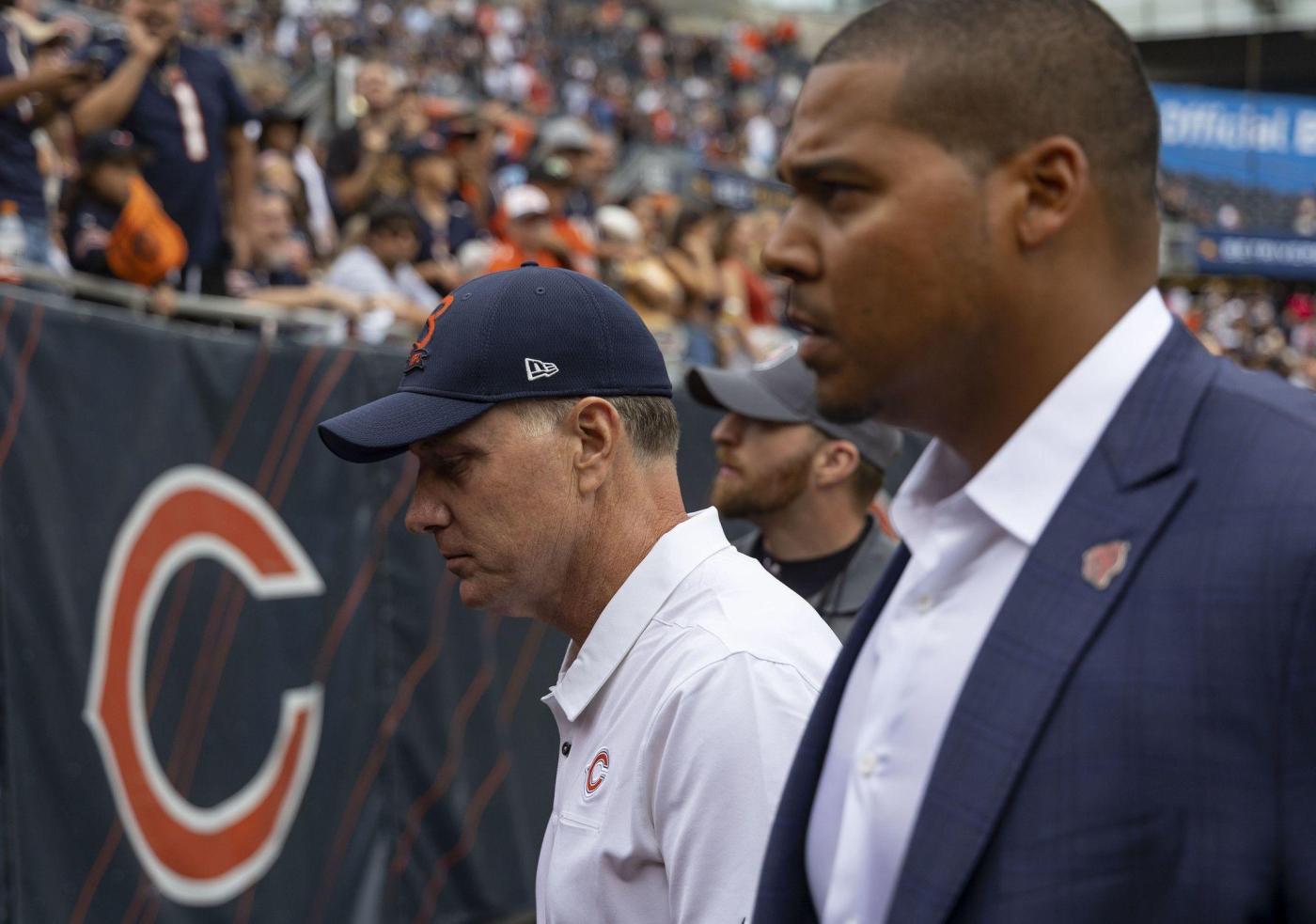 The Chicago Bears narrowed their roster to 53 players at Tuesday’s 3 p.m. deadline.

Here are the day’s moves as the Bears assemble their roster and practice squad for the regular season.

Graham, a sixth-round pick in 2021 by former general manager Ryan Pace, showed signs of promise at the end of his rookie season. But he has missed the entirety of this summer’s training camp with an undisclosed injury and fell out of the team’s defensive plans. It will be interesting to see whether the Bears move to eventually bring Graham back to their practice squad when he’s healthy or if he will have to reboot his career elsewhere.

Dew-Treadway, who hails from Bolingbrook and played at Notre Dame and Minnesota, may be another candidate to be brought back to the practice squad when the Bears assemble that 16-player group on Wednesday.

Evans, whom the Bears claimed off waivers this spring after he was cut by the Tennessee Titans, was trying to make the team as a special teams contributor but was caught in a numbers crunch.

Young, who was expected to compete for a role as a slot cornerback, has been bitten by the injury bug yet again this preseason. His placement on IR ends his chance of playing for the Bears in 2022.

Coulter and Webster both were with the Bears in 2021 in limited/practice squad roles. They were part of a large wide receivers competition during training camp that was made more unpredictable by injuries to multiple players.

The duo played in all three preseason games. Coulter had eight catches for 112 yards, while. Webster — also a punt and kick returner — had six catches for 46 yards.

The Bears also waived rookie Kevin Shaa on Monday. It will be worth watching the statuses of other wide receivers who were in the competition, including Dante Pettis and Tajae Sharpe.

Stroman, who has played in 20 NFL games since he was drafted in the seventh round in 2018, was in competition to be a backup cornerback behind Jaylon Johnson and Kindle Vildor. He had an interception in the preseason finale against the Cleveland Browns and finished the preseason with four tackles and two passes defended.

Harris, also a fifth-year NFL veteran, signed with the Bears in August and had 12 tackles, a pass defended and a forced fumble in the preseason.

Schofield, whose release was reported by NFL Network, is among the more noteworthy cuts. When the Bears signed him, they put him in competition with Sam Mustipher for the starting right guard spot. When Mustipher took over first-team reps at center following Lucas Patrick’s injury, the Bears moved Teven Jenkins from tackle to guard. Jenkins quickly earned first-team reps and Schofield remained with the second team. Schofield, an Orland Park native, has started 81 games over seven NFL seasons.

Simmons was a 2020 seventh-round Bears draft pick and has played in two games over the last two seasons. He could be a practice-squad candidate.

He was out with an undisclosed injury for some of training camp this season.

Edwards was in the news for off-the-field issues during his two Bears seasons, including for his involvement in an altercation with a woman at the team hotel during a Bears trip to Charlotte, N.C., in 2020. NFL Network reported his release.

Coley has played four seasons in the NFL but only appeared in 13 games over the last three years. He signed with the Bears on Aug. 5 and had three sacks, six quarterback hits and two passes defended in the preseason.

Gates joined the Bears in August after a wild football journey that included stops in the AAF, XFL, the Spring League, CFL and USFL. He had 11 tackles, including three for a loss, and a forced fumble in the preseason.

Allen signed with the Bears as an undrafted free agent out of Iowa State and he had two catches for 6 yards in the preseason. The Bears have veteran players in the tight ends room — Cole Kmet and Ryan Griffin. Allen is a candidate to return on the practice squad.

The Bears are waiving running back De’Montre Tuggle.

Tuggle joined the Bears as an undrafted free agent out of Ohio in May, but his chances were slim in a running backs room with David Montgomery, Khalil Herbert and 2022 draft pick Trestan Ebner. Tuggle had 21 carries for 71 yards in three preseason games but lost a fumble in the preseason finale.

The Bears are releasing quarterback Nathan Peterman but plan to sign him to the practice squad, NFL Network reported.

Peterman joined the Bears in May to be the No. 3 quarterback behind Justin Fields and Trevor Siemian. With those two players staying healthy through the preseason, it was expected the Bears would cut Peterman, who has been in the NFL since 2017. But Peterman’s presence on the practice squad would make sense after he spent four months working in the new Bears offense with Fields and Siemian.

Shaa signed as an undrafted free agent out of Liberty in May and had three catches for 42 yards in the preseason. The Bears have interesting decisions to make among a wide receivers group that has been affected this preseason by injury.

Alexander also joined the Bears in May as an undrafted free agent from Charlotte and had three tackles and a quarterback hit in the preseason. Dublin, a rookie out of Tulane, signed with the Bears on Aug. 16 after getting a rookie tryout in May, and he played seven snaps in the second preseason game.

Delance signed in May as an undrafted free agent from Florida.