Oil claws back some losses after selloff as demand fears linger

Oil rose after a two-day drop as investors weighed the outlook for demand following another interest-rate hike from the Federal Reserve.

West Texas Intermediate futures edged toward $84 a barrel after falling more than 3% over the past two sessions. Chair Jerome Powell vowed officials would crush inflation after they boosted rates by 75 basis points for a third straight time. The hike offset Russia’s escalation of its flagging war in Ukraine.

Thin liquidity has exacerbated price swings for oil, leading to wild volatility at times. Crude remains on track for its first quarterly decline in more than two years on concerns that demand may be crimped by an economic slowdown. 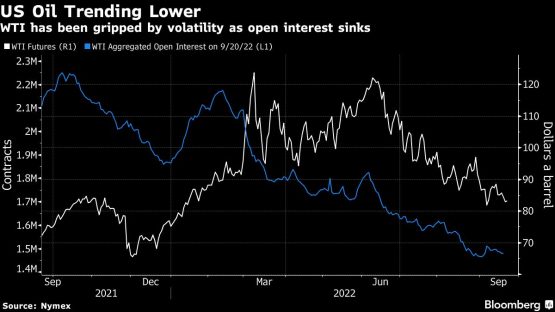 China’s Covid Zero strategy, which relies on lockdowns and mass testing to stamp out infections, is also clouding the outlook for demand. Goldman Sachs Group Inc. cut its 2023 economic growth forecast for the nation sharply, predicting Beijing will continue its stringent policy into next year.

“Demand was already being tempered by China’s intermittent lockdowns, while the macroeconomic outlook is deteriorating faster than expected in Europe and high prices are denting US demand,” Citigroup Inc. analysts wrote in a note dated September 21. Recession concerns are weighing on sentiment, they added.