Oil eased as traders waited for news on whether a key crude pipeline from Russia to Europe would be able to resume flows in the coming days, and assessed industry estimates showing a rise in US inventories.

West Texas Intermediate fell below $90 after a volatile session on Tuesday, when Russia’s Transneft PJSC said Ukraine halted flows through the southern section of the Druzhba pipeline toward Hungary, the Czech Republic and Slovakia on Aug. 4 as sanctions blocked payment of Moscow’s transit fee. Czech pipeline operator Mero CR said it expected services to be restored within days. 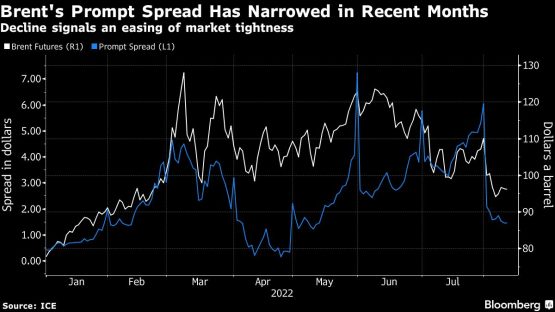 Estimates from the industry-funded American Petroleum Institute showed a 2.2 million barrel increase in US crude stockpiles last week, including a build at the key storage hub at Cushing, Oklahoma, according to people familiar with the data. Official figures will follow later on Wednesday.

Crude hit a six-month low last week on signs that demand was weakening, especially for US gasoline, just as investors fretted that a global slowdown is looming. Still, plenty of bullish risks for crude remain as Russia’s invasion of Ukraine drags on and sanctions against Moscow pile up. Separately, producer group OPEC+ has warned its spare capacity has sunk to extremely low levels.

“We think oil’s recession-triggered downturn may have ended,” said Zhou Mi, an analyst at the Chaos Research Institute in Shanghai, citing prospects for limited additional supply. For now, the Druzhba halt seems to be an issue on the Ukrainian side, not Russia’s, so the impact is limited, he added.

The interruption to oil flows along part of the Druzhba network — even if resolved in the coming days — will add to energy concerns in Europe as the continent heads toward what could be an especially challenging winter. Russia has already clamped down on gas deliveries to the region, raising the specter of shortages and recession, and the European Union aims to halt imports of seaborne crude and fuels as it tightens sanctions against Moscow.

While oil markets remain in backwardation, a bullish pattern, key differentials have narrowed sharply, signaling an easing of tightness. Brent’s prompt spread — the widely watched gap between its two nearest contracts — was $1.41 a barrel in backwardation, down from more than $3 a month ago.

Crude has declined in recent months as central banks including the Federal Reserve tighten monetary policy to quell the pace of price gains. A report later Wednesday is expected to show headline US consumer inflation stayed elevated in July, while the core reading quickened. In Asia, a release showed China’s consumer inflation surged last month to the highest level in two years.

Oil investors are in line for a dual update on the global market outlook on Thursday. Both the Organisation of Petroleum Exporting Countries, the producers’ group, and the International Energy Agency, which represents key industrialised consumers, are set to issue their monthly snapshots.