Oil swung between gains and losses as China signaled it would take steps to boost a flagging economy while the potential resumption of the Iran nuclear deal kept prices tempered.

West Texas Intermediate futures edged higher to trade near $87 a barrel after having dropped to a fresh seven-month low. China’s premier has urged more pro-growth measures in an attempt to stimulate its sputtering economy. Concerns of economic recession and its effects on oil demand continue to maintain a chokehold over markets.

Earlier, prices eased as discussions over a revived nuclear deal with Iran are progressing, with the European Union viewing Iran’s response as constructive. Crude has continued swinging in a wide range as summer trading and low liquidity exacerbate price moves.

“Right now there’s not a lot of logic in the market, because gas prices are high, people are expecting a recession, which will then curtail oil demand,” Energy Aspects director of research Amrita Sen said on Bloomberg Television. “I think a lot of traders are actually betting and putting on positions which are long gas, short crude,” she said. 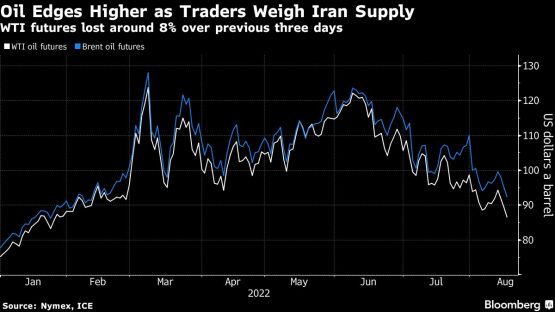 The Biden administration is evaluating Iran’s response to a European Union proposal, with officials on both sides of the Atlantic signaling the possibility that a deal could emerge after more than a year of false starts. However, Goldman Sachs Group Inc. said an accord was still unlikely in the short term.

Crude has ticked lower over the past couple of months on concerns about an economic slowdown, shedding all the gains from a surge immediately following Russia’s invasion of Ukraine. Additional crude supplies would add continued bearish pressure to a futures curve that has already narrowed significantly. Brent’s prompt spread was 55 cents in backwardation, compared with $2.08 at the start of the month, signaling an easing of tight crude markets.

Meanwhile, the American Petroleum Institute reported crude inventories fell by 448,000 barrels last week, while gasoline stockpiles increased by more than 4 million barrels, according to a person familiar with the figures. Government data is due later Wednesday.

On Sunday evening, a new moon in Libra asks you to notice how your relationships…