On a night of nothing, Skylar Thompson showed something for Miami Dolphins – Twin Cities 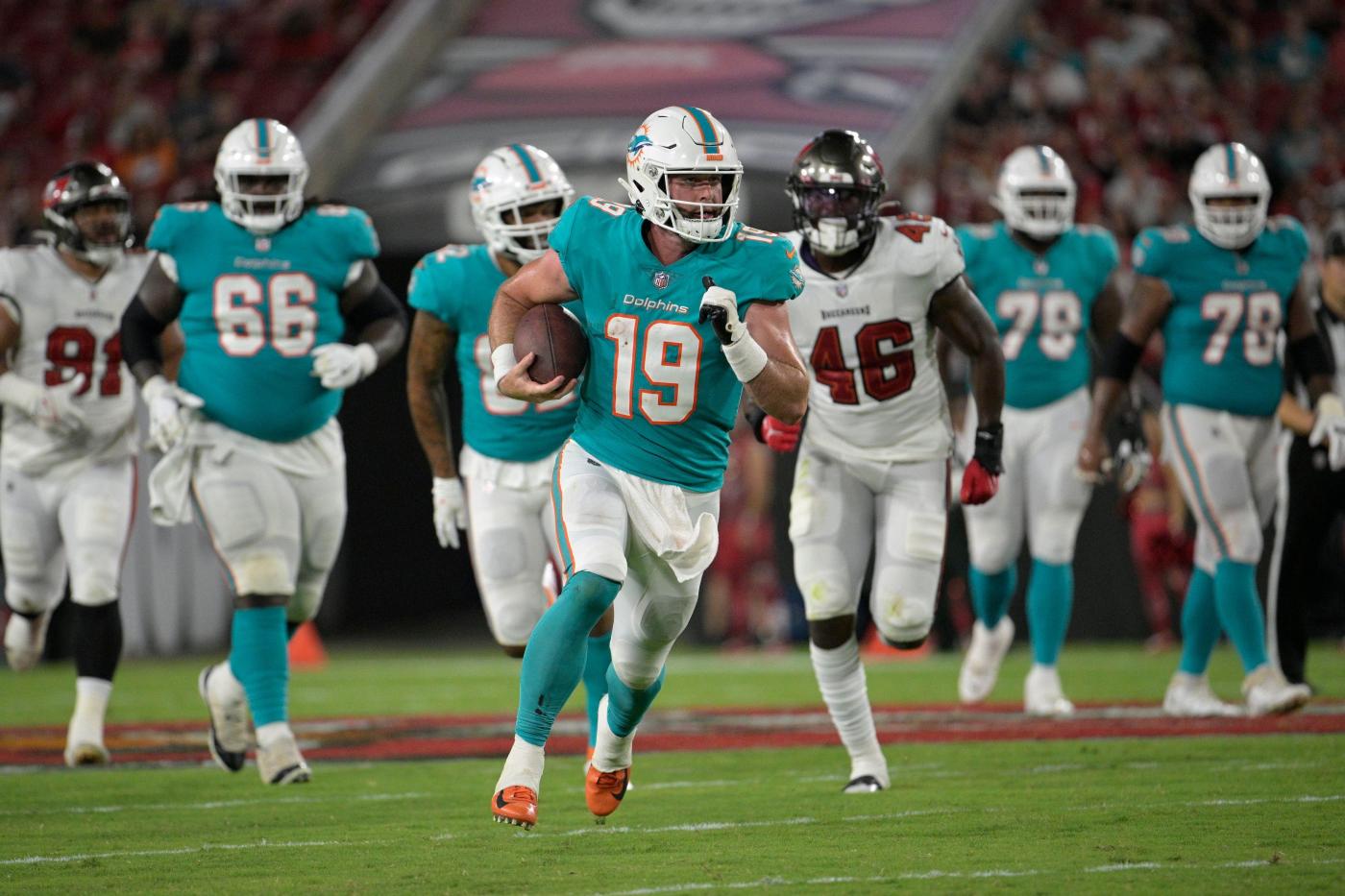 The actual starter, Tua Tagovailoa, wasn’t even a consideration to play, which is all good and fine in today’s NFL where preseason has been diminished to the point it doesn’t actually exist for many teams.

That’s why the Dolphins sat 20 players to avoid injury. Tampa Bay sat out 29 players. It’s enough to get you thinking why they play these games at all, but the last thing you want to do is think too hard about nights like this.

* Is the Dolphins’ roster thinner than expected? Case-in-point: Backup tackle Larnel Coleman gave up sacks to Tampa bay backups. Also: Third-year cornerback Noah Igbinoghene didn’t show signs of improvement in giving up a touchdown and another reserve cornerback, Trill Williams, might have suffered a serious knee injury in the final minutes.

* Is kicker Jason Sanders back to 2020 form? Sanders made all four field goals Saturday, suggesting he’s left last season’s inconsistencies behind him.

* Why didn’t center Connor Williams play to acquaint himself better with his new position?

Actually, you know the answer to why Connor Williams didn’t play and it was given above regarding Trill Williams. Come September no one will think of players getting hurt in practice. But in August that’s about all every team thinks about.

That’s why Thompson wasn’t just the starting quarterback in Tampa but — if you stayed with it all the way — he was the finishing one, too. The seventh-round pick played the whole game. He protected Tagovailoa and Bridgewater more than the revamped offensive line might have this game.

Thompson played well, too, completing 20-of-28 passes for 218 yards and a touchdown.

“The big thing is we didn’t have any turnovers as an offense,” coach Mike McDaniel said.

That might start Thompson’s trek to the practice squad, even if some will see bigger things ahead. Happens every August, but not always convincingly to those who matter. Remember Reid Sinnett’s 344 yards passing last August? He’s now a Philadelphia Eagle.

McDaniel wanted to learn something about his team Saturday. Namely, he wanted to see how it handled adversity, and maybe he could squint and see if it did after they rallied from an early deficit.

That’s what preseason games are about — or at least what they once we about. The controlled practices against Tampa Bay are more important. Why? Because they’re controlled, meaning quarterbacks aren’t hit and medieval methods like cut blocking aren’t employed.

“It’s a balancing act,” McDaniel said of sitting out players. “A lot goes into it. I talked to the players about it. I waited until Thursday evening.”

He erred on the side of September’s consequences. And how couldn’t he? Look at the big stories from this first weekend of preseason games. None are about winning moments or big steps forward.

New York Jets’ quarterback Zach Wilson is out up to a month with a knee injury. Cleveland’s Deshaun Watson apologized to, “all the woman I have impacted,” involving sexual misconduct allegations. Tom Brady left Tampa Bay for a 10-day hiatus.

That’s it. Those are the big stories. None involve McDaniel calling time-out at the final second before Tampa kicker Jose Borregales could attempt to win Sunday’s game. Borregales made that inconsequential field goal from 49 yards, too.

But after McDaniel iced him Borregales’s kick struck the upright and the Dolphins won. So maybe McDaniel has the magic touch in his first season as an NFL coach?

Or maybe this is just a Saturday night workout where the cost of the ticket, the five hours of television programming and live betting are more consequential than any conclusion of either team. McDaniel said the one thing he wanted to see was how his team handled adversity.

His team, the one he’ll count on, was mostly on the sideline. Tampa’s team was, too. It was left for Thompson to go out and have a good night. Another couple of games like that and he’ll be on the practice squad and we’ll be in September.

Part of South Africa’s longest highway, which runs from Cape Town to Zimbabwe, was shut…