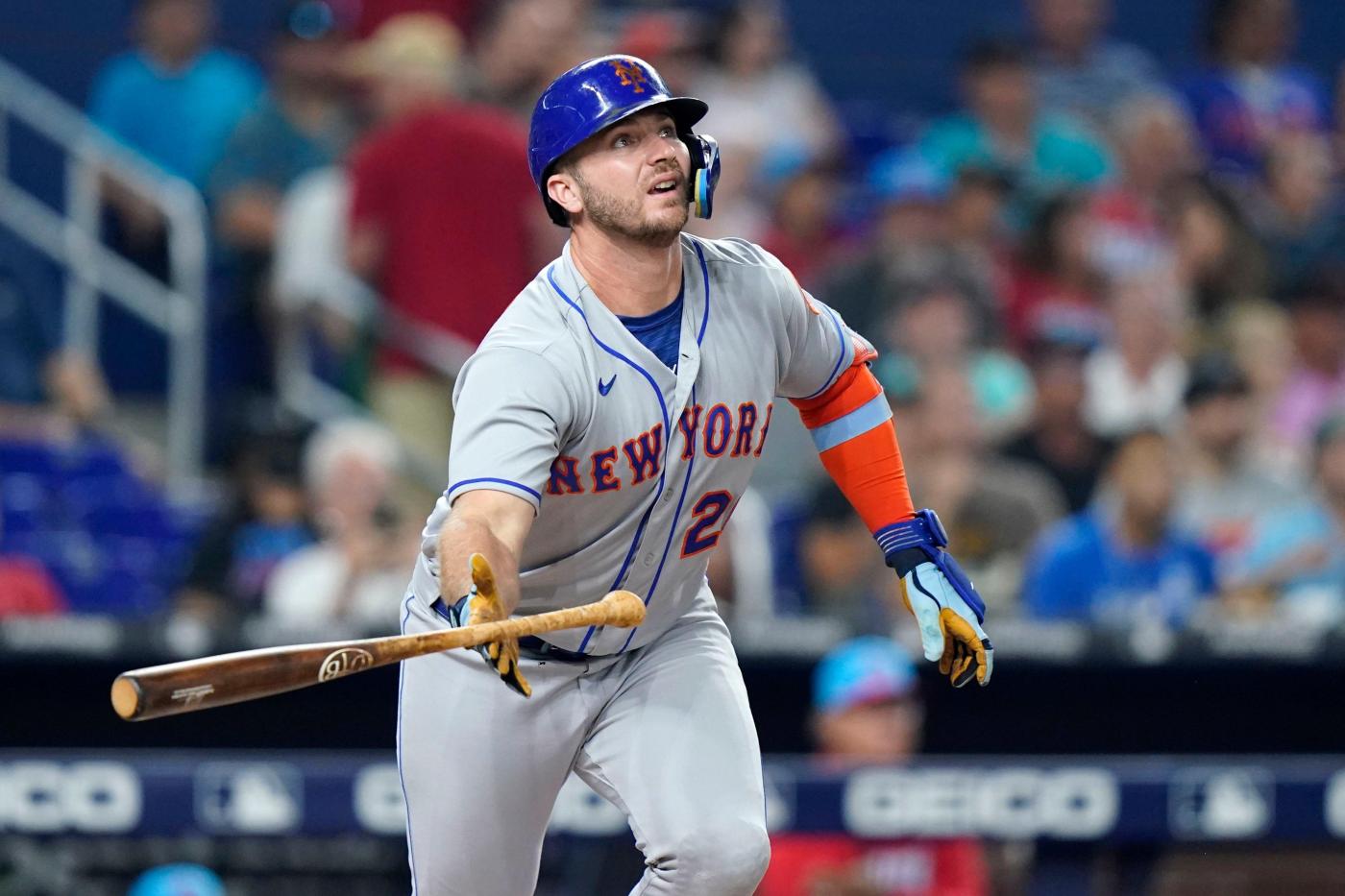 Pete Alonso just might strut into the July 18 Home Run Derby at Dodger Stadium as the MLB leader.

Alonso collected his third multi-home run game of the season and 14th of his career in the Mets’ 5-3 win over the Marlins on Saturday. His second homer of the afternoon — a 433-foot line drive to center field — snapped a tied game in the eighth inning and gave the Amazin’s the lead they would need to bury the Fish. It was the fourth time this season Alonso crushed a home run to break a tied game.

Seth Lugo, fresh off the paternity list after he welcomed his newborn son, retired the side in the eighth with a crucial shutdown inning following Alonso’s tie-breaking blast. Edwin Diaz recorded his second save in as many days, and 16th of the year, before the Mets walked onto the field and fell into their familiar and frequent high-five line to celebrate their eighth win in their last 12 games.

The Mets improved to 47-26 on the season, still boasting the best record in the National League. Only the 1986 (52-21) team posted a better record through the first 73 games of the year.

Alonso entered Saturday hitting just .190 against left-handers this season, but that average improved when the Mets slugger cranked his fifth home run off a southpaw this year. His solo home run off Trevor Rogers put the Mets on the board in the second inning.

The Mets first baseman picked up his 21st and 22nd home runs of the season in the second of a three-game series in Miami. He leads the National League in homers and is tied for second in MLB with Yordan Alvarez and Mike Trout. Aaron Judge leads the league with 27 homers. Alonso leads MLB with 69 RBI, and no one is particularly close to snatching away that first-place ranking. Francisco Lindor also has 56 RBI, fourth-most in MLB, making the Mets the only team in the majors with two players who have recorded 50 or more RBI this season.

The Amazin’s got another quality start in Miami when, for just the third time this season, Chris Bassitt pitched seven or more innings on Saturday. The Mets right-hander worked efficiently, despite some off-and-on traffic on the basepaths, and finished the seventh inning at 90 pitches. His ERA slightly improved to 4.01, after an ugly stretch of starts from May-June that altered the good season he had otherwise started.

Bassitt gave up three earned runs on six hits and collected five strikeouts in the no-decision against the Marlins. All of the run-scoring damage came on a pair of home runs. Jesus Sanchez took Bassitt deep in the fourth inning on a two-run dinger, and Bryan De La Cruz added on with a solo shot in the fifth. Bassitt has given up 13 home runs in 15 starts this season as the long ball continues to be a thorn in his side during his debut year for the Mets.

But, as long as Alonso continues having an All-Star season and the Mets offense keeps putting up runs, the Mets will happily take a start like Bassitt’s on Saturday to help advance their winning ways.