Of significance is that electricity production was actually still fine in May – it only got bad in June, and then worse in July.

The next two reports from Stats SA for June and July 2022 will show just how bad things are at Eskom.

Figures in the recent report show that electricity available for distribution has been lower every month this year compared with 2021, and way below the pre-Covid-19 levels of 2019. During the first five months of 2022, electricity distribution was more than 1 000 gigawatt hours (GWh) lower than in the comparative period in 2021.

Older copies of Stats SA reports on electricity production going back to 1993 give more bad news.

The statistics are grim if one accepts that electricity production and consumption are indicators of economic activity and living standards. 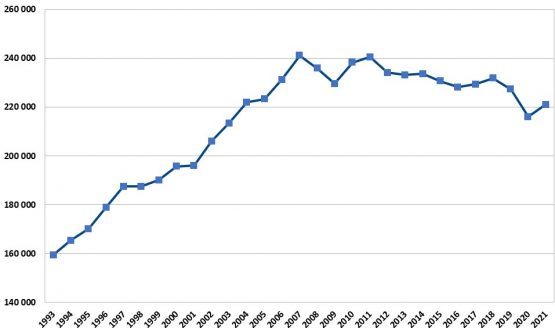 Source: Based on Stats SA figures

The Stats SA report only publishes the figures and does not dwell on the reasons for the low and decreasing electricity generation. However, the reasons are well known.

Nor does the report make a prediction for the total production this year. It is not necessary: the figures themselves show that electricity production will probably be well below 2021 levels.

The latest news from Eskom is that “we are currently load shedding in stage 4 in some areas due to high demand or urgent maintenance being performed at certain power stations”.

Eskom announced on Saturday that it lost five generation units in 36 hours, while there was a delay in returning five units to service.

“Three units at Kendal and one each at Tutuka and Majuba power stations were forced offline to perform emergency repairs. The return to service of a unit each at the Medupi, Arnot, Camden, Kriel and Duvha power stations has been delayed.

“Regrettably Stage 4 load shedding will have to be implemented at 05:00 to 00:00 on Monday. Loadshedding will then be reduced to Stage 2 from midnight until 05:00 on Tuesday. This load shedding sequence is likely to be repeated throughout the week,” according to the latest report from Eskom.

“We currently have 4 597MW on planned maintenance, while another 16 457MW of capacity is unavailable due to breakdowns.

“As the generation capacity shortages persist over the next few weeks, load shedding will continue to be implemented at various stages.

“Eskom cautions the public that it will still take a few weeks for the power generation system to recover,” it said in its announcement.

The power utility reminded the public that load shedding is implemented “only as a last resort” to protect the national grid, and urged South Africans to continue using electricity sparingly.