Ravens vs. Jets scouting report for Week 1: Who has the edge? 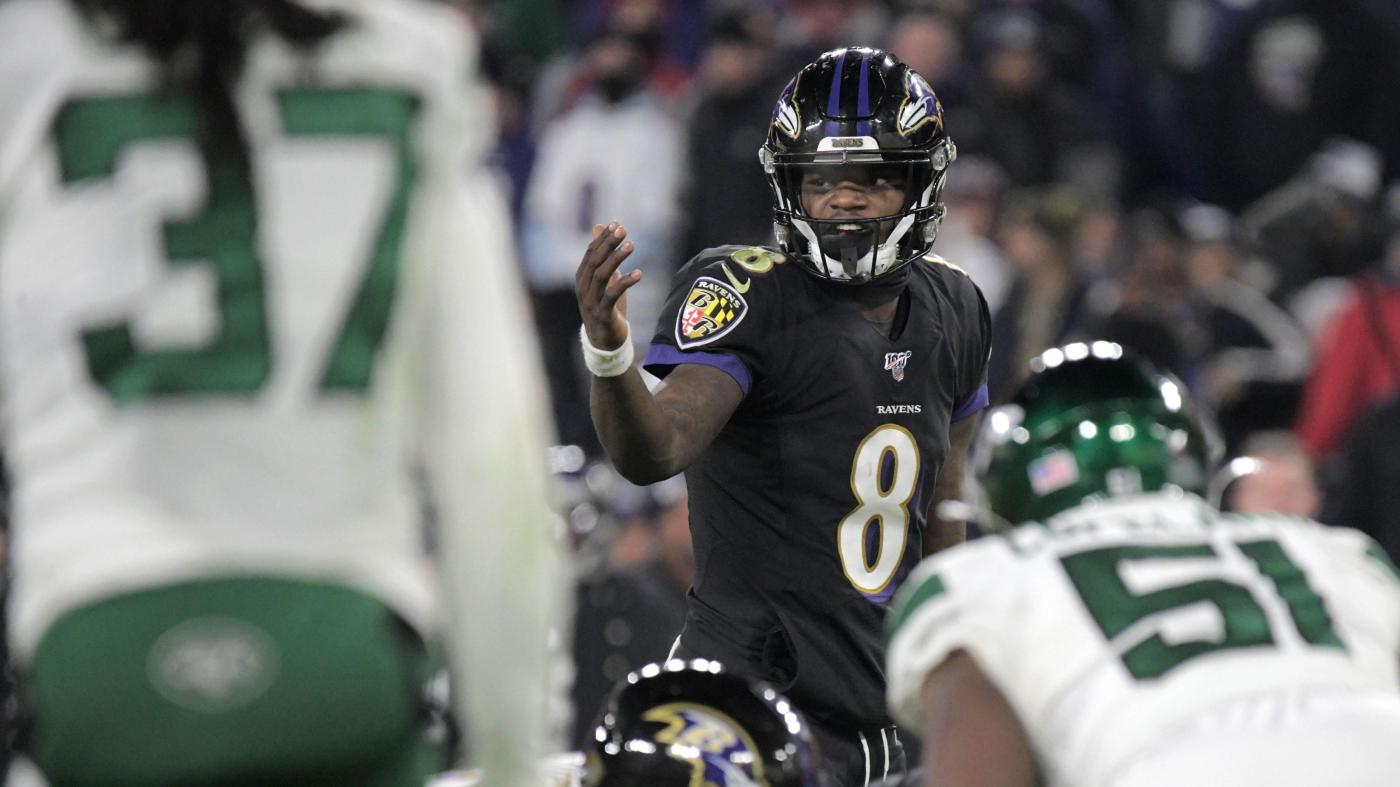 The Ravens head into MetLife Stadium for a season-opening 1 p.m. game Sunday to face a Jets team led by former Raven and Super Bowl champion Joe Flacco. Baltimore will have quarterback Lamar Jackson under center for the first time in a game since December, and the Ravens have significant matchup advantages. Here’s who has the edge in each phase of the game:

After nine months of contract talk, Lamar Jackson will get back to playing quarterback for the first time since he injured his ankle in Cleveland in December. Jackson was a leading Most Valuable Player candidate through the first six weeks of last season, but his performance declined sharply as he seemingly lost confidence in his blocking. He threw a career-high 13 interceptions and was sacked a career-high 38 times, despite playing just 12 games. He arrived at training camp packing an extra 20 pounds of muscle and throwing as well as he ever has, so all eyes will be on his form in the opener.

Jackson will be without his top wide receiver target from recent seasons, Marquise Brown, so he will need 2021 first-round pick Rashod Bateman (46 catches on 68 targets, 515 yards in 2021) to take a major step forward. Bateman and All-Pro tight end Mark Andrews (107 catches on 153 targets, 1,361 yards, nine touchdowns) are the sure things in this pass-catching corps. Who might step up behind them? Third-year receivers Devin Duvernay and James Proche? Rookie tight end Isaiah Likely, the breakout sensation of training camp and the preseason? New addition Demarcus Robinson?

As for Jackson’s protection, the Ravens added durable veteran Morgan Moses at right tackle and first-round pick Tyler Linderbaum at center. We don’t know when Ronnie Stanley will return to game action, so Ja’Wuan James, who has played three games since 2018, could be the Week 1 starter at left tackle.

The Ravens will face the fourth worst pass defense of 2021, one that allowed opposing quarterbacks to average 7.1 yards per attempt. The Jets have several very good individual defenders, including cornerback D.J. Reed and defensive end John Franklin-Meyers, and they drafted a potential star in cornerback Sauce Gardner, but they’ll need to make a major leap to have even an average defense.

The Ravens will see their former franchise quarterback, Joe Flacco, who played just 66 snaps last season but posted a 113 passer rating. Flacco has gone 2-11 as a starter since leaving the Ravens after the 2018 season. The Jets could not move the ball through the air last year, with rookie Zach Wilson, currently out with a knee injury, completing just 55.6% of his passes, throwing 11 interceptions and taking 44 sacks in 13 games. They’re looking for a No. 1 wide receiver among first-round pick Garrett Wilson, 2021 second-round pick Elijah Moore (43 catches on 77 targets, 538 yards) and Corey Davis, who played just nine games after signing as a high-profile free agent before last season. Tight end Tyler Conklin (61 catches on 87 targets, 593 yards) was a solid pass catcher for the Minnesota Vikings last year. Left tackle Duane Brown missed practice Wednesday and Thursday because of a shoulder injury, and his absence would be significant.

The Ravens hope their pass defense goes from the worst in 2021 to one of the best in 2022. We don’t know if cornerback Marcus Peters, returning from a torn ACL, will take on a full workload right away, but the Ravens are counting on him and Marlon Humphrey, along with top free-agent addition Marcus Williams and first-round pick Kyle Hamilton, to lead them to a more customary performance. The Ravens are thin at outside linebacker but looking for a breakout season from 2021 first-round pick Odafe Oweh, who could not be blocked in training camp. They have not had a player reach double digits in sacks since 2017. New defensive coordinator Mike Macdonald will offer a first glimpse of how his tactics might differ from those of predecessor Don “Wink” Martindale, who was known for creative and relentless blitzing.

The Ravens will go with a whole new crew of running backs after they scrambled throughout last season to replace the production of J.K. Dobbins and Gus Edwards. They went from first in rushing in 2019 and 2020 to third in 2021, with Jackson’s scrambling taking on outsized importance given their struggles in the backfield and along the offensive line.

They hope to be back on form this year, but we do not know how rapidly they will ramp up Dobbins’ carries as he recovers from a torn ACL he suffered last in last season’s preseason finale. He averaged 6 yards per carry as a rookie in 2020, and the Ravens need his explosiveness to complement Jackson’s creativity on designed runs and scrambles. Otherwise, they will rely on veteran additions Mike Davis and Kenyan Drake to hold the fort. Neither player was at his best in 2021, but Drake (4.5 yards per carry for his career) has big-play upside, and Davis is a prolific receiver out of the backfield.

The Jets were nearly as bad against the run as they were against the pass last season, ranking 29th in rush defense and allowing opponents to average 4.5 yards per carry. Former Ravens middle linebacker C.J. Mosley was healthy and led the Jets in tackles last season but received a poor grade from Pro Football Focus for his run defense. New York also lacked anyone resembling a dominant interior run defender, though fourth-year defensive tackle Quinnen Williams is productive.

The Jets hope second-round pick Breece Hall will boost their 27th-ranked running game after he combined for more than 3,000 yards over his last two years at Iowa State. He’s a powerfully built, patient runner with good top-end speed and soft enough hands to stay in on third down. The Jets will also count on Michael Carter, who led them in rushing with 639 yards last season.

Run defense was one area where the Ravens did not falter last season. They led the league, holding opponents to 3.8 yards per carry. They will again lean on veteran Calais Campbell as their top interior defender, with returning nose tackle Michael Pierce adding complementary power in the trenches. At linebacker, they will hope 2020 first-round pick Patrick Queen takes a significant step forward in Year 3 after he made more modest improvements last season. Josh Bynes, who started 12 games in 2021, will be there to lend a steady hand in his 12th season.

The Ravens finished first in Football Outsiders’ special teams DVOA in 2021. Justin Tucker made All-Pro again, hitting on 35 of 37 field-goal attempts and nailing an NFL record 66-yard game-winner in Detroit. The Ravens made a change at punter after 16 years of Sam Koch, handing the job to fourth-round pick Jordan Stout, who was impressive in training camp in the preseason. All-Pro returner Duvernay averaged 13.8 yards on punt returns and 24.1 yards on kickoff returns.

The Jets also excelled on special teams, finishing second in DVOA. All-Pro returner Braxton Berrios averaged 13.4 yards on punt returns and 30.4 yards on kickoff returns. The Jets struggled to find a reliable kicker, however, and signed veteran Greg Zuerlein, who made 29 of 35 field-goal attempts for the Dallas Cowboys last season.

The Jets have not finished with a winning record since 2015 and will look to reverse their fortunes under charismatic second-year coach Robert Saleh. A star-studded draft class has created some excitement for their beleaguered fan base, but unless Wilson takes a leap in Year 2, they are expected to remain an also-ran in the stacked AFC.

The Ravens, on the other hand, hope to make a deep playoff run after horrid injury luck derailed them in 2021. They made the postseason every year from 2018 to 2020 and are 37-12 in the regular season with Jackson as their starting quarterback. John Harbaugh, one of the league’s most respected coaches, went with a different approach this preseason, resting almost all of his key players in all three games.

The matchup with Joe Flacco holds narrative allure, and we have little idea how sharp the Ravens will be after their starters took a pass on the preseason. But the Jets don’t have a talent advantage in any area, and they don’t have an offensive star to go shot for shot with Lamar Jackson. The Ravens will stifle New York’s offense and bank a road victory as they begin their quest to return to the playoffs. Ravens 27, Jets 13