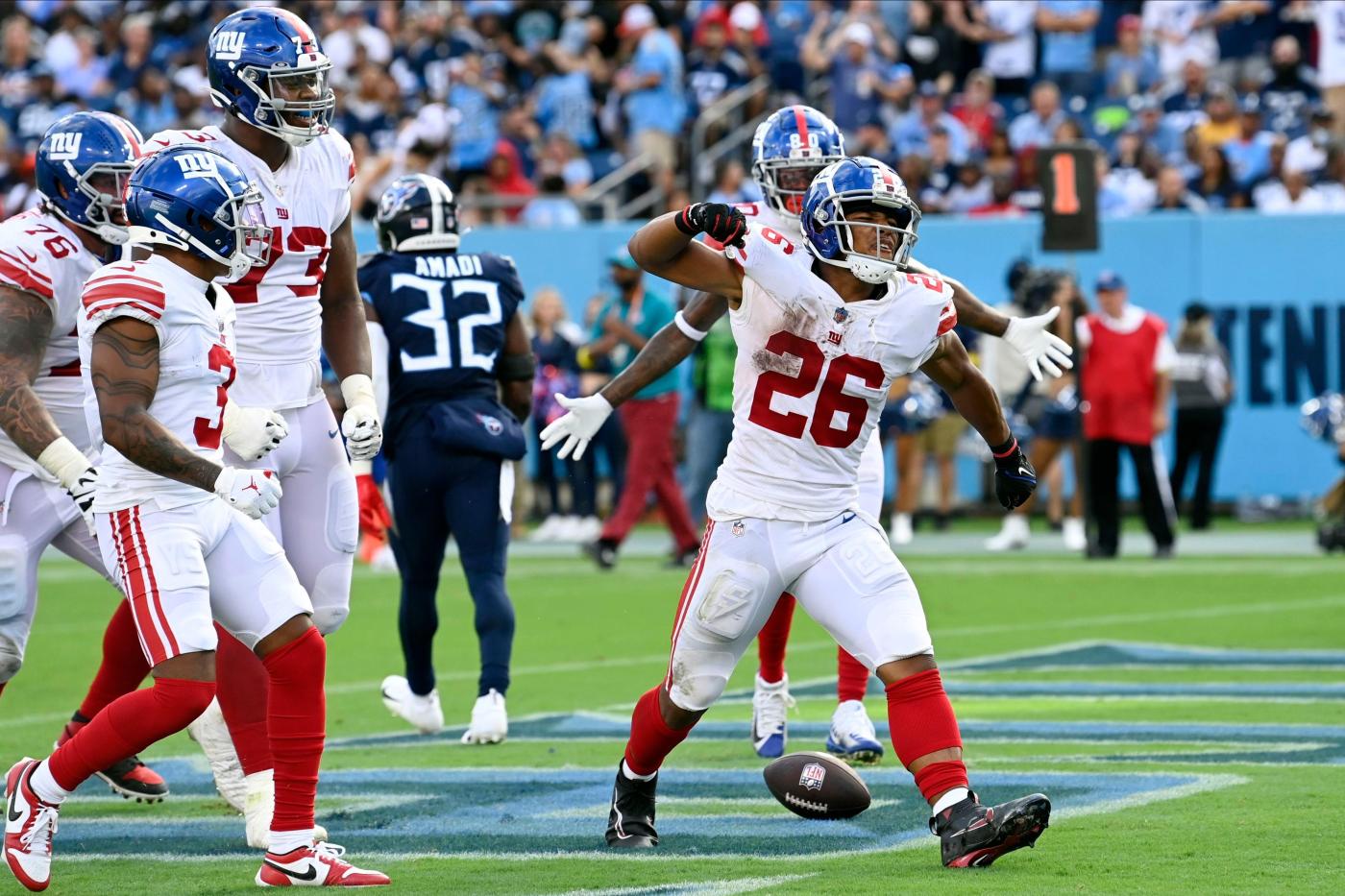 Saquon Barkley only had a chance to be Sunday’s hero because the Giants’ defense put the team on its back for the entire first half.

Safety Julian Love said that was an important development: seeing the offense and defense support each other, rather than pointing fingers or hanging heads.

“That’s how it has to be for us, honestly,” Love said. “The last few years it’s been a situation where somebody gets down, and we don’t back each other up, and there’s been sides. Not in a big way. Subtly. But nah, we’re in this together. We’re gonna ride as a team.

“So yeah,” Love added. “They had some turnovers. But our defense is building that mindset of we’re excited to be out there. Give us your best shot.”

Ward pushed back on how individually effective he was against the Titans’ back, even though five of his six tackles came against Tennessee’s top weapon.

“I was? I didn’t even know that,” Ward said. “You’re saying it’s just me. I thought it was the whole team … He’s a hell of a player. We were trying to make sure he made no big plays.”

On offense, Jones was pressured a ridiculous 18 times on 26 dropbacks, per NFL NextGen Stats. The pass protection made it nearly impossible to move the ball.

The Giants trailed 13-0 at halftime. And Jones committed two turnovers in the game: a second quarter sack fumble and a fourth quarter interception in the end zone. But none of it got Don Martindale’s players down.

“We wanted to play for each other,” Lawrence said. “No matter if the offense didn’t score, get three out, defense had to be resilient. Our mindset is loving going on the field. Loving making another play. Loving possibly trying to create another turnover.”

The offense then had to watch and bite their nails on the Titans’ final drive, when Ryan Tannehill drove Tennessee easily into field goal range against the Giants’ porous pass defense.

But Sterling Shepard said the offense had to have the defense’s backs at that juncture, because the defense had gotten them to that point.

“That’s what your teammates are for,” Shepard said. “You got to pick each other up. They could have been mad at us for the first half and the way that we played. That’s just the way the game goes. It is going to have ups and downs. You just have to keep fighting for it. That is what this sport is all about.”

The FOX broadcast filmed head coach Brian Daboll giving Jones a good talking to on the Giants’ bench after the quarterback’s brutal interception in the end zone.

Daboll initially claimed he was speaking on his headset to other coaches, not to Jones. But the footage showed Daboll take his headset off and talk to his quarterback.

“I said, ‘What’d you see?’” Daboll said. “He thought he could potentially back shoulder it. And I said that’s not what I saw, but you got the ball in your hand. So you’re gonna get the ball back at some point. Our defense is gonna give it to you. Let’s drive down and get it again.”

Jones said of the exchange: “I was just talking through the decision there. Obviously one I’d like to have back and a costly mistake down there. So I think he was just communicating that, and you’ve got to take advantage of those opportunities when we have points. We’ll definitely look to clean that up.”

Jones’ shovel pass to Barkley for the two-point conversion looked like a play straight out of Andy Reid’s Eagles and Chiefs playbooks. Sure enough, Daboll gave credit to offensive coordinator Mike Kafka — a Reid disciple from Philly and Kansas City – for the play call and design.

Daboll, funny enough, said the play was “something we practiced since training camp that hasn’t always worked. But the guys knew what to do.”

Rookie left guard Josh Ezeudu made a nice block on the play. And Barkley faked out Titans linebacker Dylan Cole, who crashed the play unblocked but failed to contain the Giants’ running back inside.

“It was a good play designed by Mike and good execution upfront,” Daboll added.

Ezeudu struggled early. He was beaten by the Titans’ Jeffrey Simmons for the sack fumble of Jones. But the Giants seemed to run the ball better with the rookie in the game. And Ezeudu made a powerful block on Titans DE Kevin Strong on Barkley’s four-yard TD run in the third quarter.

“[Offensive line coach] Bobby [Johnson] did a great job,” Daboll said. “We knew we were going a couple of series and flipping them in and out. And Bobby did a great job with that. Communicating with those guys.”

Sterling Shepard knew he was going to break the tackle and get in the end zone once he got behind Titans corner Kristian Fulton on his 65-yard touchdown.

“It’s over with,” Shepard said. “I wasn’t going to be denied on that one. It has been a long time coming, a long road for me. I just thank God, man. It was some dark times going through recovery.”

Shepard also said he’d known since Saturday night that if the Giants needed an extra point to tie Sunday’s game, Daboll would go for two and the win.

Robinson, the Giants’ second-round pick out of Kentucky, had his right knee bent awkwardly on his first NFL catch. He made a five-yard reception on third down to convert for a first but got twisted down on a hit by Titans safety Amani Hooker.

Daboll said Robinson had told him “I just landed funny.” The coach did not project confidence in Monday’s Zoom interview. “Day to day,” he said twice. Daboll wouldn’t say anything optimistic when asked if the Giants had avoided something long-term … Corner/gunner Nick McCloud (hamstring) already left the game in the second half.