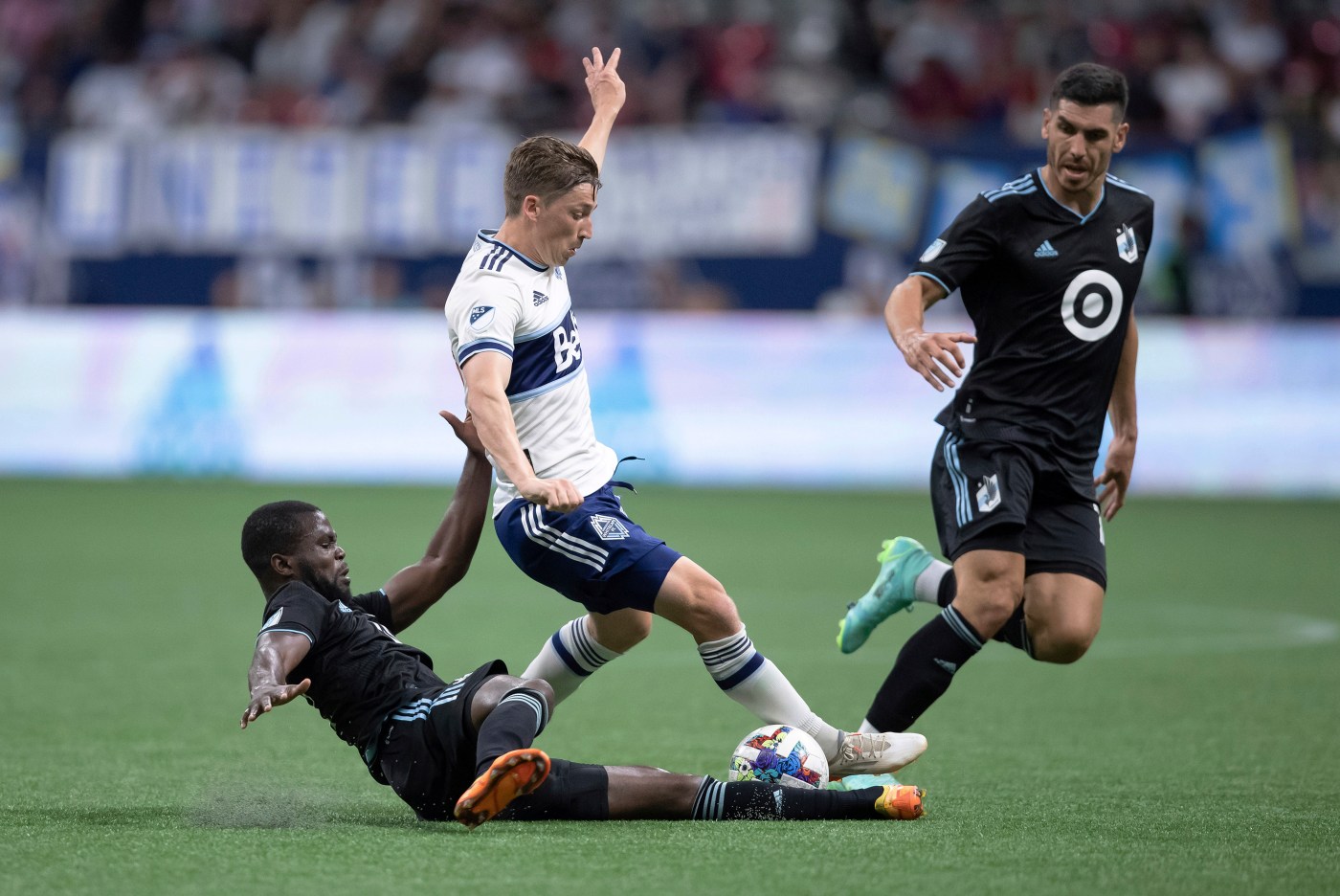 “Taxi” was willing to accept a fare and took the Loons where they wanted to go on Friday night.

Living up to his nickname, Kemar Lawrence overcame a bout with the flu to score Minnesota United’s equalizing goal, and it jumpstarted a 3-1 comeback win over Vancouver Whitecaps at BC Place.

Before Friday, Minnesota was 0-5-2 when conceding the first goal this season. Lucas Cavallini’s header had put Vancouver up 1-0 in the 66th minute, but Minnesota’s rally in the final 20 minutes led to their third straight victory. It comes on heels of a three-match losing streak into June and is the club’s first three-match winning streak since July 2019.

When manager Adrian Heath woke up Friday morning, he didn’t think Lawrence would play come evening. The Jamaican left back was sick midweek and missed Wednesday’s training session in Blaine, but he still made the trip to British Columbia.

“Then I got a text from Donny Fuller, the physio, and that Kemar says he’s playing,” Heath shared postgame. “He hasn’t come all this way to sit in his bed. … He literally hasn’t eaten for a couple of days because every time he was eating, he was bringing it back up.”

But not only did Lawrence play, he was at the back post to smash in a left-footed volley from D.J. Taylor in the 71st minute. The lifeline was followed by Luis Amarilla’s long-range rocket from about 25 yards out in the 84th and Franco Fragapane’s chip in the 88th.

“(The players showed) enormous amount of character, but more importantly, it was the manner of which we went about it,” Heath said. “We didn’t lose our shape. We kept doing what we know we are good at, kept moving the ball and obviously some really good goals.”

It was Lawrence’s first goal since he was traded to Minnesota from Toronto FC in April and comes after two of his crosses directly led to goals in the last two Loons wins. Both of those victories also included three goals scored.

Lawrence said he started to feel better on Thursday and told himself he needed to hydrate and hopefully his health would continue to improve Friday. Not every meal ended with vomitting. But when the 50th-something minute came around against the Whitecaps, “I was like I need to get off this field. I might collapse a little bit.”

His goal didn’t come until 20 minutes later and just before he subbed out in the 82nd, Lawrence made a big tackle to take away a scoring chance from Ryan Gauld.

“That is one of my favorite things to do,” Lawrence said. “I feel like I love that even more than scoring a goal. … You’ve got to really get the timing right. Everything has to be perfect or it’s going to be a red card. In those moments, (I) get really calm.”

Dayne St. Clair was credited with a rare goalkeeper assist Friday; it came on an arcing long ball that Fragapane ran onto and scored on Maple Grove native Cody Cropper. … MNUFC didn’t make a single change to its starting XI from the 3-2 win over Real Salt Lake on Sunday. Attacker Robin Lod was called on again to move into central midfield, without Joseph Rosales (illness) and Kervin Arriaga (ankle) available. … MNUFC right back target Alan Benitez said goodbye on Instagram on Friday to his Paraguayan club Cerro Porteno and recalled the Primera Division championship they won in 2021. The 28-year-old Paraguyan said it was the club he dreamed of playing for, yet his transfer to Minnesota is expected to be imminent. … The Loons were linked to Bordeaux striker Hwang Ui-Jo on Friday, but other clubs are more likely to sign the South Korean international, a source said. “He’s not the only player that we’ve inquired about,” Heath said. “We’ve got a couple of spots open and we are going to try to do something in this (transfer) window. We have a couple of other options.” … Former Loons academy product Mataeo Bunbury of Prior Lake has signed with Birmingham Legion of the USL Championship. The 17-year-old right winger had four goals and one assist in 10 games this season with Sporting Kansas City 2 in the MLS Next Pro league.