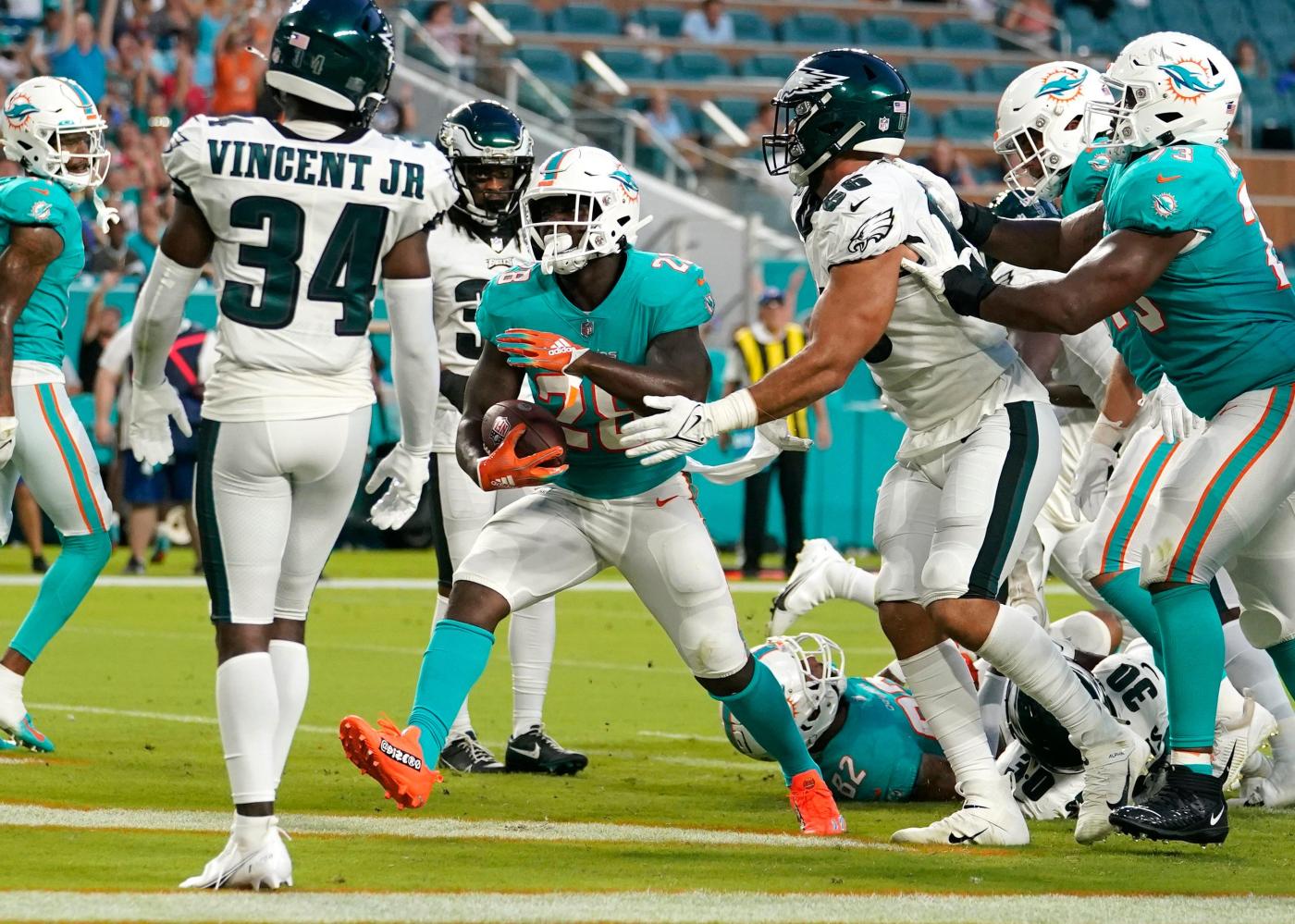 Wide receiver Preston Williams managed a smile or two in Saturday’s postgame locker room even though he knew it might be his last Miami Dolphins postgame locker-room experience.

NFL rosters must be trimmed to 53 players by 4 p.m. Tuesday, a reduction of 27. Williams, who muffed a punt that Philadelphia recovered and turned into a third-quarter field goal in Miami’s 48-10 preseason finale victory, is among those who will be anxiously waiting for news.

“I’m not nervous,” he said. “I’m just ready for what’s next. Whatever it is. Because at the end of the day, I just want an opportunity.”

Most likely, Williams is done in Miami.

There’s chatter the Dolphins are looking to trade Williams, and that there’s a good amount of interest around the league. We’ll see how that goes.

Four years ago, as a big-bodied rookie from Colorado State, the 6-foot-5, 220-pound Williams was a rising star, a training camp darling. He combined sure hands with desirable size and jaw-dropping athleticism and seemed to do something amazing every day.

But now, after injuries, coaching changes and a slew of other talented wide receivers were acquired, Williams, who took his frustrations public via Twitter during training camp, isn’t certain he’ll make it through the coming round of cuts.

Williams played 17 offensive snaps in Saturday’s preseason finale against Philadelphia. He was targeted once. He ended with no receptions. He’d liked the game to go differently on a few levels.

“More targets, more reps on offense, more routes to run,” he said. “Obviously we know I can block, know I can catch, too. I just want to showcase that.”

If the Dolphins keep six wide receivers it would likely be Tyreek Hill, Jaylen Waddle, Cedrick Wilson Jr., Erik Ezukanma, Trent Sherfield and Lynn Bowden. The last four — Wilson, Ezukanma, Sherfield and Bowden — are the ones who took a job from Williams, the guys who beat him out for a roster spot.

Veteran running back Sony Michel will be waiting for Tuesday’s cuts, too, although there’s a bit of role reversal from Williams. Michel will likely be beating someone, such as fellow running back Myles Gaskin, for a roster spot.

Michel, an American Heritage grad and two-time Super Bowl champion, winning with the Los Angeles Rams last season and New England in Super Bowl LIII, has proven he can help teams with his between-the-tackles running ability. He showed that skill again Saturday with a 1-yard touchdown run against the Eagles.

Michel hasn’t had a great training camp, but unlike Williams, he’s capitalized on his opportunity.

Michel, who joins a running game that finished 30th in the 32-team NFL last season, has skins on the wall, so to speak. He rushed for 845 yards last year with the Rams and more than 900 yards each of his first two NFL seasons with New England (2018-19).

There’s still a small bit of uncertainty for Michel regarding Tuesday’s cuts, but not much.

There’s still a small bit of uncertainty for Michel regarding Tuesday’s cuts, but not much. Things are already happening. A report Tuesday mentioned running back Gerrid Doaks has been cut, and the Dolphins announced they’ve signed linebacker Trey Flowers.

“I’ll be relaxed,” Michel said. “This decision is going to be made, it’s out of my control.”

McDaniel, perhaps out of obligation, spoke highly of the guys who won’t make the roster at wide receiver and running back.

“The one thing that you can rest easy at night [about] is I feel like they’ll all have opportunities, regardless of which ones make it, in the National Football League,” he said, “because they’ve taken their game to another level and put it on tape.”

If that’s what’s next, Williams is ready.

The real shame is this is the most receiver-friendly offense of Williams’ time with the Dolphins. And he probably won’t be around to enjoy the usage.

“We’ll see, I don’t know,” Williams said of his chances at making the final roster. “They kept me this long, so we’ll see if I got a shot.