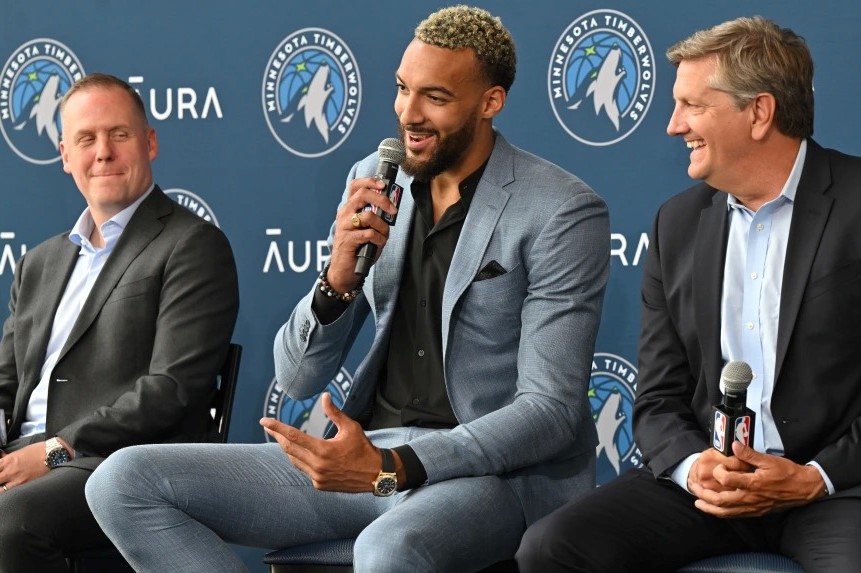 He can defend. He can rebound. He is the epitome of size.

There is so much about Rudy Gobert that fits like a glove in Minnesota’s roster.

The All-NBA center is a salve to their warts while providing no hindrance to their existing abilities. He’ll make defense easier for everyone — serving as a catch-all on the back line should someone get beat on the perimeter, while taking on the game’s best post scorers on the interior.

On offense, he won’t demand play calls but will serve as a consistent lob threat while getting others easy looks through his screening, passing and gravity around the rim.

That statement extends far beyond the on-court aesthetics.

Tim Connelly, the Timberwolves’ president of basketball operations and the man who made the ultimate call on the trade, doesn’t hide from the fact Minnesota gave up “a lot of draft capital” in the deal. They don’t own their own first-round pick in an odd-year draft until 2031. But that was the cost of this type of massive swing.

It’s the biggest move of Connelly’s career as a basketball boss, dating back to Denver. He acknowledged such risks are scary to take. Roster management is an “inexact science.” There is no guarantee that this will all work out just how Minnesota envisions it.

Gobert stated his goal Wednesday to help Minnesota win a championship. He may well do just that. But that’s a mighty feat. Gobert is the main reason Utah won more regular-season games than any other team in the league over the past four years. The Jazz never got a ring to show for it. Championship hunting is a fickle business.

If the sole definition of success is to win a title in the next four years, good luck. That may or may not happen. Many will suggest it won’t, pointing specifically to the youth of two of the Timberwolves’ most important pieces in Anthony Edwards and Jaden McDaniels.

Connelly would point to that age as another reason to make this deal.

Are Edwards and McDaniels ready to contribute to deep postseason pushes?

“I think we have to believe that,” Connelly said. “We have to empower those guys.”

Young teams can make runs. See: Memphis, who just this spring, with a younger core than the one Minnesota sported, ousted the Wolves in Round 1 before pushing eventual champion Golden State to six games.

To suggest Edwards can’t do the same in the near future is to admit you haven’t watched the 20-year-old rise up and meet just about every challenge with which he’s been presented early in his NBA career.

But it is important to remember Edwards is still in the infant stages of his rise. And while some may think that was a reason for Minnesota to hold back some of its chips this offseason, Connelly thought it to be a determining factor to say “All in.”

The Timberwolves made a serious leap last season, going from 23 wins to 46 and making just their second playoff appearance since 2004. Gobert noted Minnesota was a “different team” than the one with which he’d done battle in previous years.

“Their will to win was different, their culture and the way they were approaching the games, I felt like something had changed,” Gobert said.

That shift was all part of what Finch called “a great foundation” the Wolves laid. But he felt Minnesota had to do something to make sure it didn’t drift backward from that point. The Western Conference was down last season, largely thanks to a number of injuries to key players. Just because the Timberwolves were a playoff team last season, didn’t mean they’d be the same next spring.

That all changes with Gobert, who’s been one of the NBA’s consistently most impactful regular-season players in recent years. What he has been as an individual is what the Timberwolves hope to become as an organization.

He knows the commitment required to work your way to nearly the top of the mountain, then pick yourself up and start the ascent again the following fall.

“You have a guy who comes in here able to impact both ends of the floor and fits seamlessly alongside what we already have and brings a maturity and professionalism in approach and an experience and a worldliness that a young team really needs,” Finch said. “It’s something that I’m very excited to start to see grow and grow.”

Gobert said his goal is to bring grit to Minnesota, serve as a leader and help the younger players continue to build their habits, particularly on the defensive end — where he currently stands as the best in the world. That’s where winning starts for Gobert, and it’s where it will start for the Wolves.

Connelly acknowledged Wednesday that he doesn’t have all the answers. But he does feel like he knows who Rudy Gobert is as a player and a person. And, in that respect, he does know the impact the 30-year-old center can have on the likes of Towns, Edwards and McDaniels.

“What’s the value in making sure these guys are going to see winning at a high level?” Connelly said. “I know the hardest thing I like to do is get elite talent to learn to win. … I know what it’s going to mean to show Anthony Edwards what (about) winning is really, really important in the years that I think are most impactful for him — his early years. I think oftentimes it kind of snowballs. Winning begets winning, begets winning.”

Gobert is a proven winner. He should help the Timberwolves earn the same designation — paving a path for success for the likes of Edwards to follow in Minnesota for years to come.

In that way, the center can secure the same future some fear this trade compromised.