Russia looks set to resume gas supplies through its key pipeline to Europe, a relief for markets even as fears persist about more halts this winter.

Grid data indicate that flows will resume on Saturday at 20% of capacity as planned. It’s become a persistent worry among policy makers in Europe that when Russia shuts the Nord Stream pipeline for what it says is necessary maintenance, it may not restart.

Germany has already said that it wouldn’t count on Nord Stream this winter at all. Gazprom PJSC says the only functioning gas turbine at the link’s entry point must undergo technical maintenance every 1,000 hours. That’s about every 42 days, with the next checks due in mid-October. Expectations are growing in Europe that these flows will be used continually throughout the winter to keep markets on edge and as a way to squeeze the bloc on sanctions.

Shipment orders, published by the pipeline’s operator, indicate that flows are expected to restart from 2 a.m. Berlin time on Saturday at one fifth of normal capacity, the same level as before the work. Orders don’t guarantee actual flows, and normally it takes time for supplies to recover to planned levels.

Russian Deputy Prime Minister Alexander Novak signaled on Thursday the country is sticking to the schedule it outlined, according to Tass news service.

Gazprom slashed supplies through Nord Stream in July, shortly after the pipeline’s seasonal maintenance, citing technical issues. The flows were halted on Wednesday for checks at the only functioning turbine that helps to pump gas into the pipeline. Normally, it uses six major turbines and two smaller ones, but this summer most of the equipment was put out of service with Gazprom citing international sanctions that disrupted maintenance and repairs. 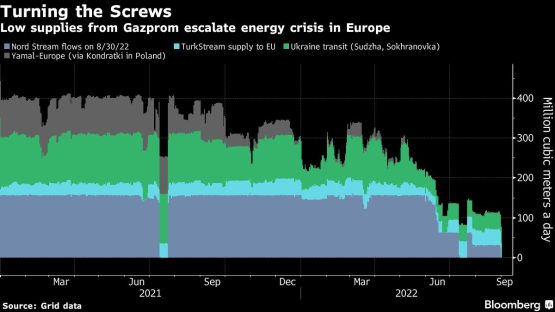 The European Union has been preparing for disruption. The region’s race to store gas for the upcoming heating season has led refill rates to hit the targeted level two months ahead of schedule, easing the immediate threat.

Lower consumption, coupled with higher gas stockpiles and supplies from alternative sources, could help offset Russia’s risks for now. But a prolonged Nord Stream halt would be an indicator how far Russia is willing to go, meaning more risks this winter — especially if it’s a cold one.

“While widespread rationing across the EU is not inevitable even in a shut-off scenario, it would be a high risk in some countries, including Germany,” Fitch Ratings said in a note Thursday. “Recession in the eurozone now appears likely as a result of the deepening gas crisis.”

It’s not yet clear when Nord Stream turbines that are offline could be serviced. This may need to happen either on site or in Canada, where they were produced.

For the remaining unit regular maintenance is due to technical requirements provided by manufacturer Siemens, according to Gazprom. That means repeated halts if the situation with other turbines doesn’t change by October.

A spare part that could boost deliveries has been stuck in Germany after repairs in Montreal, with Moscow and Berlin arguing over which documents are needed to enable its return to Russia.