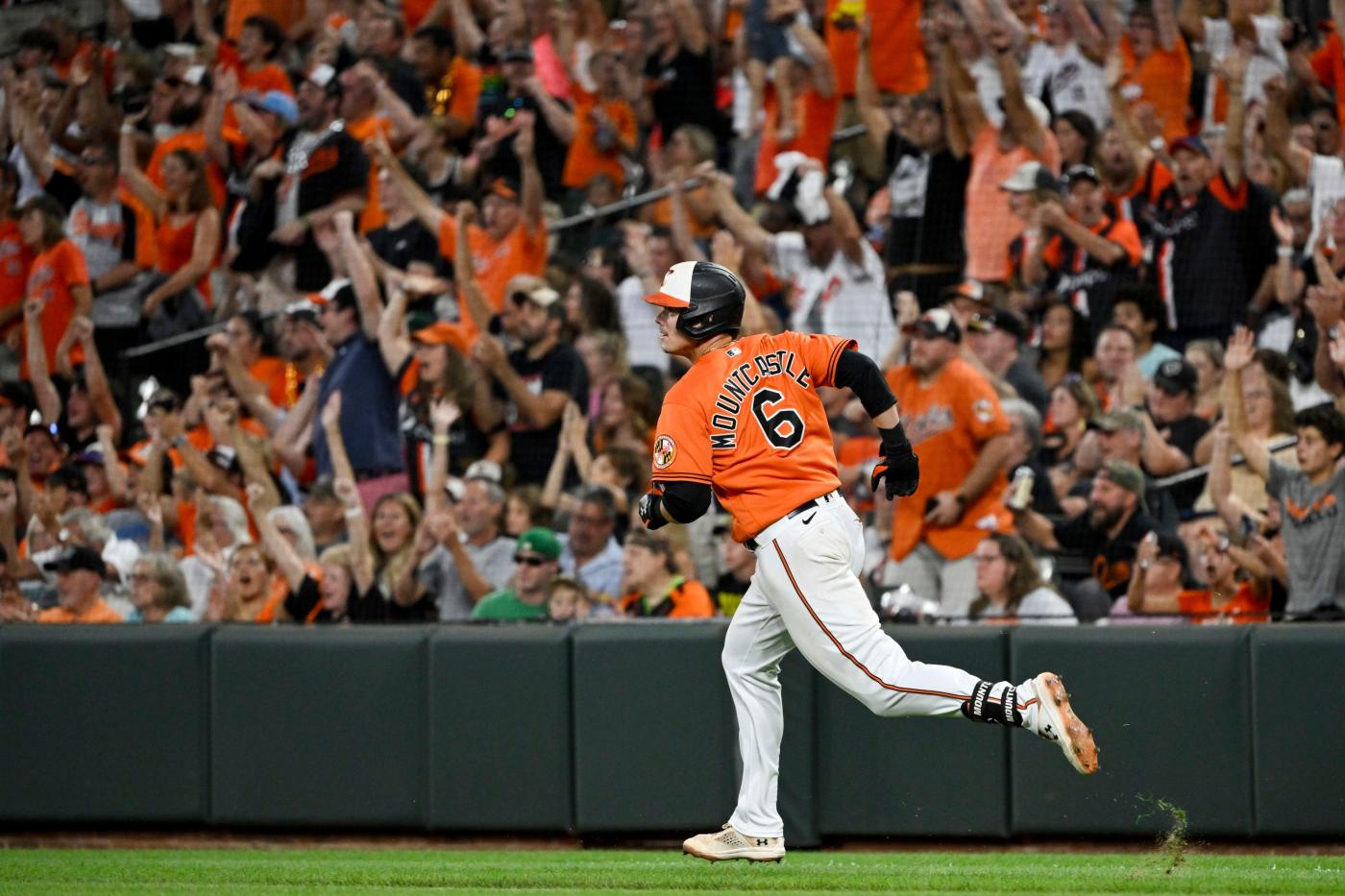 Sometimes a change in the calendar can be all that’s needed. For as dreary as July and August were for Ryan Mountcastle, the start to September has been more optimistic.

That optimism took the form of Mountcastle gazing upward, following the soaring parabola of a ball headed over the left field fence at Oriole Park before beginning the first of two home run trots Saturday night.

Between July 1 and Aug. 30, Mountcastle hit five homers. But in his last four games, the Orioles first baseman has gone deep three times, including his first-inning blast and his third-inning opposite-field shot. With each homer, there’s a growing sense that Mountcastle has turned a corner on his midsummer doldrums. The immediate benefit of those four RBIs on Saturday was powering Baltimore to an 8-1 win against the Oakland Athletics to keep pace in the American League wild-card race.

With their fourth straight victory, the Orioles (71-61) move a season-high 10 games above .500 and stay within 1 1/2 games of the final postseason spot.

“It seems like for the past month, maybe two months, every game has been very important,” Mountcastle said. “For me to start picking it up now is big for me and the team.”

For Mountcastle, particularly, the home runs are a good sight after he posted a .589 OPS in July and August.

“You hit one, sometimes they tend to come in bunches,” Mountcastle said. “Hopefully they keep coming.”

On a night full of home runs, perhaps the most impressive swing from any Baltimore player is the one that didn’t end up counting. The sheer neck-craning nature of the blast, leaving fans and players alike to stare up and gape as the ball hurtled a fraction right of the foul pole, was something to marvel at.

Gunnar Henderson’s foul ball left his bat at a 40-degree launch angle and traveled an estimated 409 feet down the right field line toward the B&O Warehouse.

“I thought it was maybe deep enough to be able to sneak past the foul pole before it went foul,” Henderson said. “I was wishing it went that way, but it didn’t fall.”

The offense offered plenty of breathing room for a pitching staff that danced out of danger early before dominating late.

Right-hander Austin Voth needed 30 pitches to escape the first inning with just one run against him, but he soon found trouble in the fourth. Voth conceded three straight singles to load the bases, then forced a shallow flyout before his early hook after 3 1/3 innings.

Left-hander Keegan Akin escaped the jam by forcing Chad Pinder into an inning-ending double play that brought the 30,853 fans at Camden Yards to their feet. Akin worked a hitless two innings in relief to cover for Voth’s shortest outing since July 25.

“For me, that was the key to the game, getting the groundball double play with Pinder there,” manager Brandon Hyde said.

For the last three weeks, left-hander DL Hall has pictured this opportunity. He wanted to get back on the mound in a major league ballpark and prove he belonged there, washing out the taste of his debut — in which he allowed five runs in 3 2/3 innings against the Tampa Bay Rays before he was optioned to Triple-A Norfolk to develop as a reliever.

When Hall hurled a 98-mph heater past Shae Langeliers for his second strikeout to end a scoreless eighth Saturday, he let out a yell.

“I feel like I’ve been sitting on Tampa for three weeks just itching to get back up there and show what I can do,” Hall said.

The rookie threw a three-pitch mix of his four-seam fastball, curveball and changeup to strike out two batters in the eighth inning. He drew three whiffs on four swings against his changeup, a pitch Hall calls his “secret weapon.” And without a need to watch his pitch count, his velocity crept higher than it did in his debut last month.

Hall faced three right-handed hitters and had no trouble with any of them, pitching to Rutschman for the first time in the big leagues.

“You start down in Low-A, and the big leagues feel like it’s forever away,” Hall said. “And sometimes even it feels like it’s impossible. But like I said, anything’s possible as long as I got the big man above with me. It was awesome and something I’ll never forget.”

The doubts crept in as a 24-year-old, already seven years into his minor league career. That’s when Robinson Chirinos, a middle infielder in the Chicago Cubs system, was sent to extended spring training in Arizona. Once there, in the blistering July heat, he donned catchers gear for the first time and prepared to learn a new position.

“That’s probably the lowest point of my career,” Chirinos said 14 years later outside the Orioles dugout. “But for some reason, it clicked. That morning in Arizona, I told myself, ‘You know what? You’re gonna break into the big leagues as a catcher.’”

Two and a half years later, Chirinos made it as a 27-year-old.

And he’s been here ever since, reaching 10 years of major league service time Saturday, qualifying him for MLB’s pension program. The 38-year-old has made a larger impact in the clubhouse for Baltimore than he has on the diamond, serving as a mentor for Rutschman.

Before Chirinos arrived this offseason, Hyde had heard from friends around the league that the catcher was a good teammate.

“But he has definitely exceeded those lofty expectations already, just how much he’s impacted our team, impacted our clubhouse, impacted our dugout,” Hyde said. “I think a huge accomplishment for a player is being an ultimate teammate and how you make players better around you, and Robbie has done that he’s made our whole clubhouse better. He’s helped change the culture of our team, and I can’t thank him enough for that.”

Early on, Chirinos never thought of reaching 10 years of service time. He was more concerned with the day-to-day aspect of maintaining his role. But in 2019, he realized how close he was. And now he’s arrived.

“Can’t take it for granted,” Chirinos said. “It’s been a long journey, but I enjoy every step of the way.”