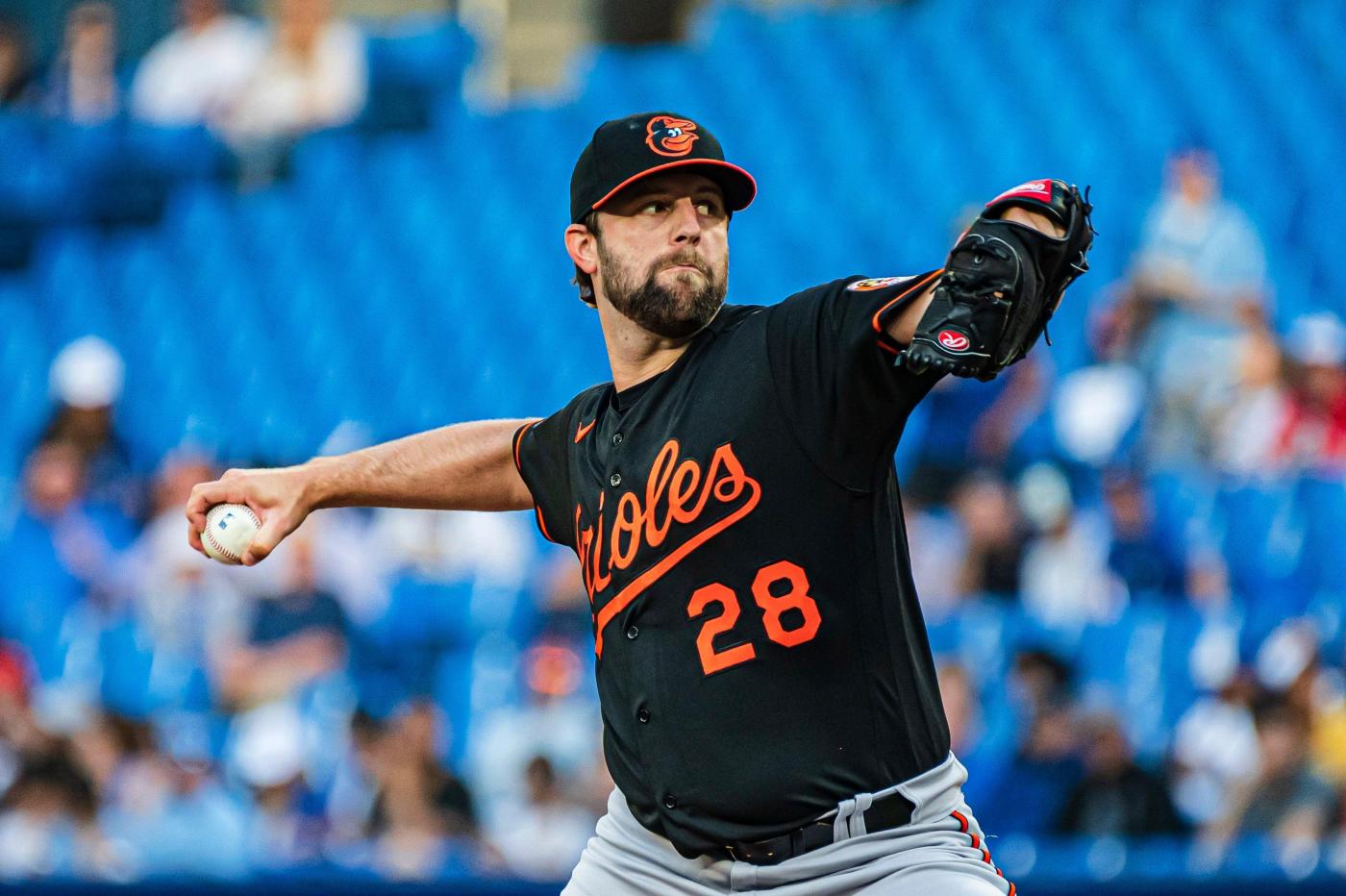 This all could have been much different had the ball been a few feet to the right. It had plenty of distance — landing in the highest deck at Rogers Centre — but Teoscar Hernández turned back toward home plate rather than starting the trot of a grand slam.

And one pitch later, Jordan Lyles struck Hernández out, stranding the bases loaded in a gritty display that has been missing from the Orioles right-hander of late. In the midst of a skid that includes at least four runs against him in six of his last eight starts, perhaps the collective cheers of Blue Jays fans when the ball left Hernández’s bat weren’t premature. It’s the kind of hit that has gone against Lyles recently.

It made the strikeout to end the third inning more satisfying, as Lyles allowed just one run instead of a deluge. It still wasn’t a hallmark effort from Lyles, who hasn’t completed six innings in almost a month. But it was an improvement, a platform Baltimore needed en route to a 6-5 victory in Toronto that required a five-out save from right-hander Jorge López.

The third inning was a grind, requiring 25 pitches for Lyles to escape with just one run against him, but it’s the sort of grind the Orioles (27-36) needed. Over his last three starts, Lyles had given up a combined 13 earned runs, failing to push deeper than the fifth inning. His outing in Kansas City on Thursday was the lowest point of that stretch, as he allowed six runs on eight hits.

Lyles made it past five innings Tuesday, although just barely. He recorded one out in the sixth and gave up a double before manager Brandon Hyde turned to Félix Bautista, who promptly allowed that inherited runner to score. Lyles finished having allowed four runs on five hits with seven strikeouts — an improvement, yet still below the standards he holds for himself.

For much of Lyles’ career, this has been his ceiling. But he envisions himself as an innings eater for Baltimore, stepping up as a veteran in a rotation devoid of much experience, and he’s thrice thrown over 100 pitches this season. He finished at 96 pitches Tuesday, needing the bullpen to carry the final 3 2/3 innings. A run crossed on Cionel Pérez and a leaping snag from Ryan Mountcastle at first base prevented a run with López on the mound, but it was enough.

Lyles’ pitch movement was better than his last start, as he recorded 14 whiffs — half of which came from his slider. There have been times he needs to resort to that pitch, but he drew a called strike or swing and miss on one-third of his four-seam fastballs Tuesday and his sinker showed more life than it did in Kansas City.

That’s all promising, signs that Lyles could be scraping out of a rut that has left him and the Orioles in a funk. Still, had the ball off the bat of Hernández been a few feet to the right, it might’ve all been for naught.

There’s something about the Blue Jays, or perhaps it’s the need for a passport. But when Mountcastle faces Toronto, the ball tends to leap off his bat. He entered Tuesday’s contest with a 1.001 OPS against the Blue Jays, and he drove that number skyward over the course of the night.

First it was hit two-run home run in the third, blasted the opposite way for Mountcastle’s 10th career long ball against the Blue Jays — more than any other team. Then came a double in the fifth, which greeted right-hander Trevor Richards out of the bullpen. He wound up scoring when Adley Rutschman moved Mountcastle to third and Tyler Nevin sent a sacrifice fly to right field.

One batter earlier, Austin Hays’ bomb to straightaway center field chased left-hander Yusei Kikuchi from the game, tagging him for a third run. Hyde hoped the Orioles could elevate the ball off Kikuchi, a tactic that worked last year when he faced Baltimore as a member of the Seattle Mariners. It worked again, with Mountcastle’s homer the prelude for a better offensive display than Monday night’s 11-1 loss to the Blue Jays.

For a week-long stretch in late May, Mountcastle found himself with five hits — all singles — and 11 strikeouts. But since May 30, Mountcastle has found his stride, with five homers and six doubles in 14 games playing a major role in Baltimore’s offense.

>> Trey Mancini will miss two to three games after he was hit by a pitch Monday on the knuckles of his right hand, leading to intense swelling. X-rays on the hand showed no fracture, and Mancini said he think he’ll avoid an injured list stint. “I’ve gotten hit like that a few times in the hand, and up to this point — knock on wood — I haven’t had any fractures or anything,” Mancini said. “I drank a lot of milk as a kid.”

>> With Kikuchi on the mound for Toronto, Hyde opted to sit outfielder Kyle Stowers to avoid a left-on-left matchup. Stowers made his debut Monday and recorded an RBI double. As a substitute player on the road trip, he only has so much time with the club before he rejoins Triple-A Norfolk. Hyde said Stowers will be back in the lineup Tuesday.