SA had 3.6m indigent households in 2020, most relying on some form of support

While the Auditor-General’s (AG) latest report on the financial state of municipalities paints a dire picture of mismanagement and declining service delivery, the StatsSA census points to some favourable outcomes. 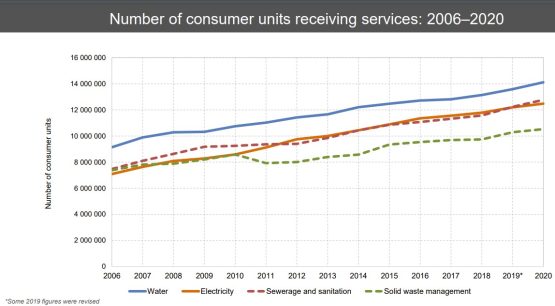 An obvious conclusion when placing the AG’s municipal findings alongside StatsSA’s Non-financial census is that more people are receiving services, but at huge financial cost to the country. What is not disclosed in the StatsSA census is the quality of the services delivered, which the AG has started to include as part of its audit opinion. Fewer municipalities are receiving clean audits, and budgets are being cannibalised to cover rising staff and councillor salary costs. That leaves less for maintenance and other expenses essential to service delivery.

According to StatsSA, the number of consumer units receiving free basic services decreased for all services except electricity between 2019 and 2020.

The census shows 134 592 indigent households had been provided with solar home power systems in 2020, up from about 131 000 in 2019. More than half of these solar systems were provided in Gauteng, followed by Eastern Cape.

The Free Basic Services policy introduced by government in 2001 allows for:

The number of people employed by municipalities decreased from 333 412 in 2019 to 311 364 in 2020, a decline of more than 6%. StatsSA says there were 23 230 people occupying posts at the management level (including mayoral and councillor positions) in all South African municipalities, excluding vacancies, with 14 209 these posts filled by men while women occupied the remaining 9 021 posts. There was a 43,2% decrease in the number of funded vacant posts from 53 569 in 2019 to 30 426 in 2020 (including mayoral and councillor’s positions).