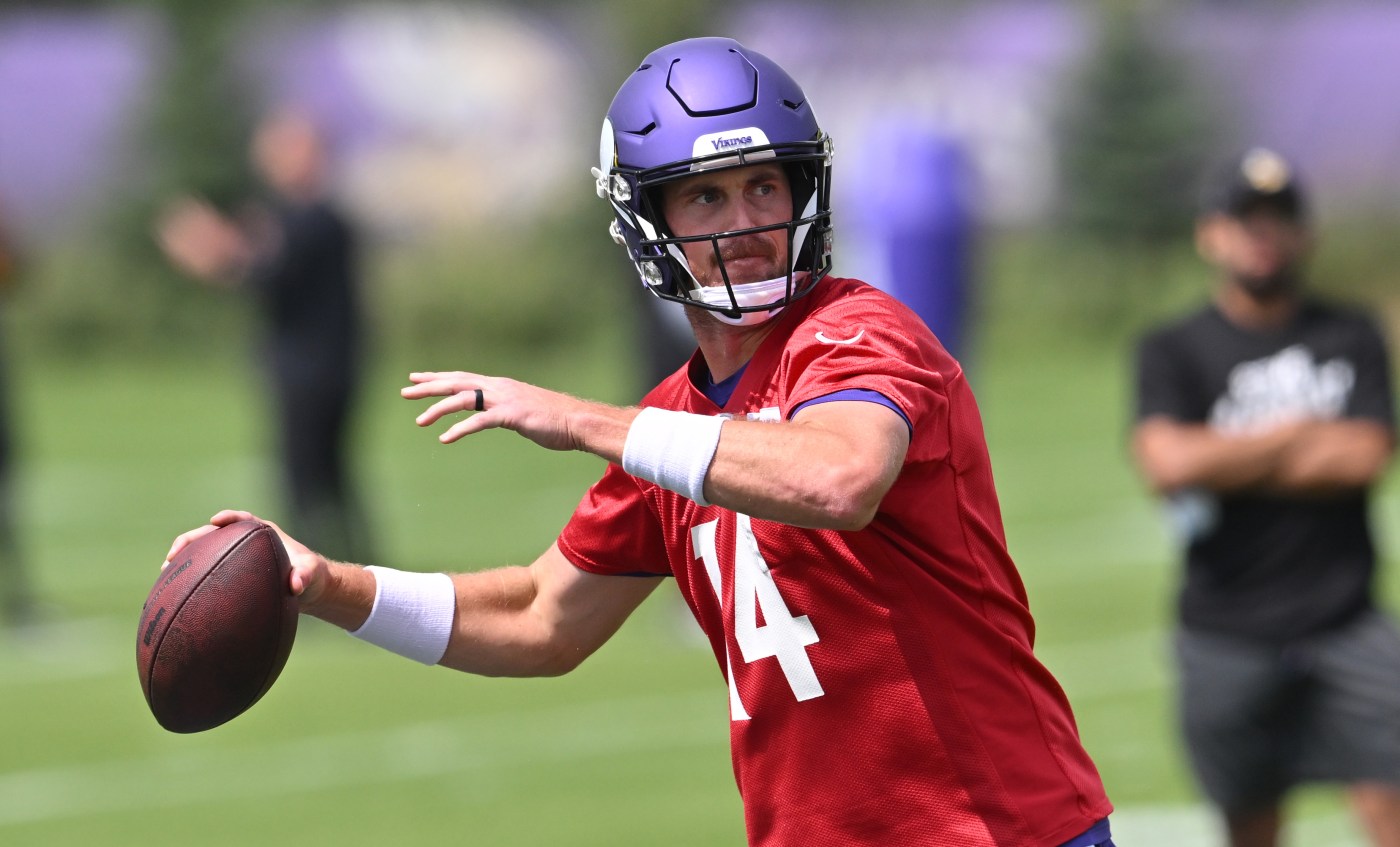 Sean Mannion and Kellen Mond were the only quarterbacks present for Thursday’s practice at TCO Performance Center in Eagan. That much was assured a few hours earlier when the Vikings sent Kirk Cousins home with an undisclosed illness.

Not surprisingly, the Vikings had a rather disjointed practice without their starting quarterback in the mix. They struggled to get into a rhythm on offense with both Mannion and Mond lacking the chemistry that Cousins has with the rest of the starters.

After splitting reps in the early stages of practice, Mannion took the lion’s share with the starters down the stretch while Mond worked almost exclusively with the backups. That gives a pretty clear indication as to which quarterback is in the lead for the No. 2 spot on the depth chart.

The rest of the battle will play itself out over the next month or so, Sunday’s preseason opener against the Las Vegas Raiders offering a chance for both players to prove the deserve the gig.

“You know, every rep matters, whether it’s being out here at practice or being in the preseason game,” Mannion said. “You just want to put your best foot forward all the time.”

As for Mond, although he might be a little further behind in his progress, he’s eager to showcase his skills in a game.

“Just have to trust my reads and go out and play football,” he said. “That’s what we’re here for, and (on Sunday) we’re able to go do it on a live stage against a different team.”

Asked about learning under coach Kevin O’Connell, both Mannion and Mond said they feel extremely comfortable in the new scheme.

“Our whole quarterback room helps each other,” Mannion said. “It’s a lot of hours in there together. I know Kellen has been a huge help to me, and I try to help him, and Kirk has helped both of us a lot. It’s really a collaborative effort.”

As things slowly wound to a close in Thursday’s practice, kicker Greg Joseph calmly trotted out for a 60-yard field goal attempt. He’s been outstanding in training camp so far, and while nobody would have criticized him for missing such a long kick, this was another chance to prove himself.

With his teammates cheering him on, Joseph lined up, swung his leg, and booted the ball between the uprights.

It looks as if special teams coordinator Matt Daniels knows what he’s talking about. Remember, it was Daniels who a couple of weeks ago predicted Joseph was going to have the best season of his career.

Though the competition at right guard is far from over, rookie Ed Ingram appears to be setting himself up to start. He took reps with the first team at Thursday’s practice, veteran Jesse Davis once again working with the second team. It was a similar story in Wednesday’s practice.

“Ultimately, with that first group, Ed has earned the right to get some reps with those guys,” O’Connell said. “That healthy competition is, I think, what’s going to make our (offensive line) the best possible group that I’m looking for this season.”