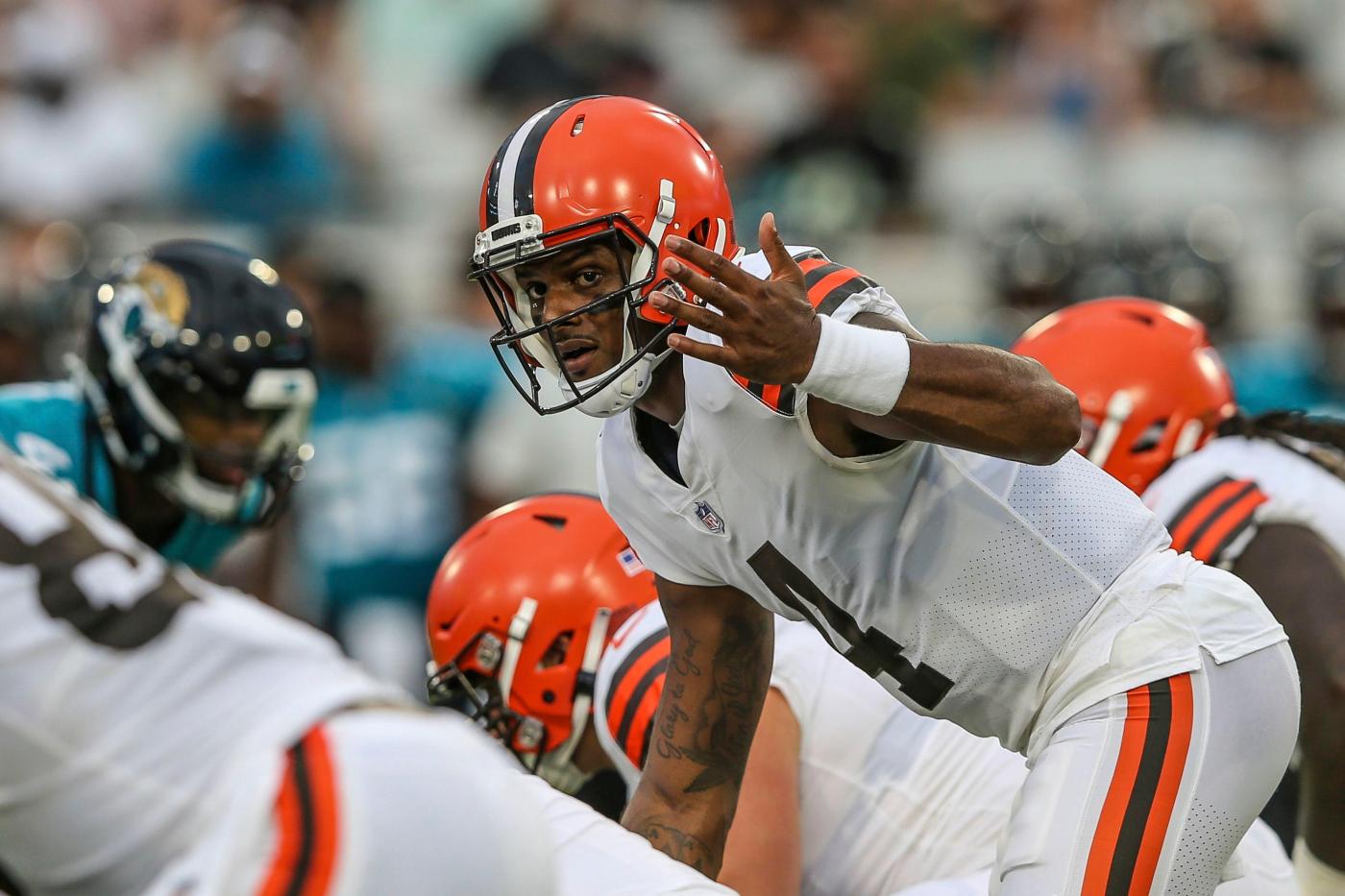 It is no surprise that the Cleveland Browns, who paid Deshaun Watson $230 million guaranteed despite rampant sexual assault allegations, started him at quarterback in Friday night’s preseason opening 24-13 win over the Jacksonville Jaguars — while Watson’s six-game suspension remains under appeal.

Judge Sue Robinson already ruled, as a jointly paid and appointed arbiter, that Watson had engaged in a pattern of sexual assault. She ruled that his “pattern of conduct” is “more egregious than any before reviewed by the NFL.” She noted his “lack of expressed remorse.”

Watson, who has long refused to acknowledge wrongdoing or show contrition, suddenly waved the white towel — er, white flag — in a four-question spin session with a Browns-affiliated reporter. But he wouldn’t answer questions about it from any other media after the game.

Nothing says transparency and I’m sorry like controlling the questions, the timing, the interviewer and the narrative, right?

“Look, I want to say that I’m truly sorry to all the women that I’ve impacted in this situation,” Watson told the team reporter in an empty hotel hallway before getting on the team bus. “My decisions that I made in my life that put me in this position I would definitely like to have back. But I want to continue to move forward and grow and learn and show that I am a true person of character and I want to keep pushing forward.”

Watson only came crawling back with his tail between his legs after NFL commissioner Roger Goodell tripled down on the QB’s “predatory” behavior and the league’s continued pursuit of an indefinite suspension at a special league meeting in Minneapolis.

Former N.J. attorney general Peter Harvey failed to rule on the NFL’s appeal of Watson’s suspension by Friday — even though his ruling is supposed to be “expedited,” per the collective bargaining agreement. That allowed the Browns to play Watson in the exhibition game.

Leading up to the game, there were also rumors of Watson seeking a compromise on the final suspension, and of backdoor negotiations between the QB’s side and the NFL on a middle ground.

That is always where legal experts believed this was likely to land, as the Daily News outlined last week: a compromise that allows both the NFL and players’ union to claim victories in this new disciplinary setup.

So Watson completed 1-of-5 passes for seven yards on Friday. The stats don’t matter, though.

What matters is the Browns’ moral failure, their lack of decency, and Watson’s victims — who had to watch him trying to play one in that empty hotel hallway.

Zach Wilson’s right knee injury wasn’t the only concerning development for the Jets Friday night. His play was concerning and ominous, too.

He was staring down receivers. He threw an interception directly to Eagles linebacker Kyzir White. He showed a lack of awareness in making that fateful cut on his scramble rather than stepping out of bounds in a meaningless preseason game.

The stakes are high in Florham Park this season.

The former No. 2 overall pick’s return from the bone bruise and meniscus tear and continued development might soften the blow of another potentially difficult year for head coach Robert Saleh and GM Joe Douglas.

But if he returns and plays the way he did on Friday night — then the situation could spiral quickly into another dismal year with no silver linings, given the schedule gauntlet starting Sept. 11 against the Baltimore Ravens.

And it wouldn’t shock anyone if Woody Johnson blew it all up again, if there were a repeat of last year’s 4-13 finish.

That is the worst-case scenario, though. For now, the Jets have to try their best to ensure they don’t end up there. To that end, Joe Flacco is not the answer to a competitive 2022 season in the AFC East, regardless of the coaching staff’s genuine affinity for the veteran backup QB.

So if Wilson at any point gets shut down, Jimmy Garoppolo most certainly makes sense as a trade target. Saleh and offensive coordinator Mike LaFleur have strong ties to Jimmy G from their 49ers days and Super Bowl LIV run in 2019.

For now, Saleh deserves credit for how hard the backups played for him in Friday’s second half, outscoring the Eagles 21-7 on the way to a 24-21 preseason win. But he also has to clean up mistakes like linebacker Quincy Williams’ late hit on Eagles starting quarterback Jalen Hurts, which Saleh called “egregiously awful” and enraged Philly coach Nick Sirianni.

And he needs Wilson to play better.

Tom Brady is taking an extended break from Tampa Bay Buccaneers training camp to “deal with some personal things,” head coach Todd Bowles said. Bowles said they spoke with Brady about this arrangement prior to training camp. Word on the street is that Brady may have negotiated some summer time off as part of his agreement to return and play for the Bucs in 2022. He certainly needs to rest after all that time he spent trying to get out of New England and Tampa to play for the Miami Dolphins the past few years. Must have been exhausting. …

Bears linebacker Roquan Smith wants out of Chicago in the final year of his rookie contract. The team took him off the physically unable to perform list in response to his threat of a hold-in. But he’s not practicing. Head coach Matt Eberflus encouraged reporters to ask Smith about not practicing, but the Bears would not make Smith available to the media. And there is a report by ProFootballTalk that a person purporting to represent Smith has been calling other teams to gauge potential trade interest — a person not licensed by the NFLPA. Quite a show in the Windy City so far. …

Patriots running back James White retired this week due to a hip injury. He should have won MVP in Super Bowl LI on Feb. 5, 2017, in New England’s historic comeback over the Atlanta Falcons. His stat line: 20 touches for 139 yards and three TDs, including the game-winning 2-yard TD run in overtime. Brady somehow got the award for going 43-of-62 for 466 yards, two TDs and an interception, even though White’s mismatch on Atlanta’s defense was the X-factor that made it all possible. …

Player agent Todd France of Athletes First is in hot water. The U.S. Third Circuit Court of Appeals ruled this week that France “committed fraud” during a previous arbitration of a claim by agent Jason Bernstein over receiver Kenny Golladay’s switch from Bernstein to France in 2019 while with the Detroit Lions. That was first reported by Jason Morrin of Conduct Detrimental. Bernstein was suspicious because of an autograph signing Golladay had participated in — and Bernstein had not arranged — three days prior to the termination of their relationship. France denied during arbitration that he’d been involved in the autograph signing, but the circuit court found that he was behind it. People in the league are curious what discipline France could possibly face with the grievance going back to the NFL Players’ Association. He is a major player in the player representation space. …

Goodell and the league’s owners approved the sale of the Denver Broncos’ franchise to the Walton-Penner group for a North American sports record $4.65 million. Then owner Rob Walton stepped to the podium and thanked “Goodle,” mispronouncing the commissioner’s name. Hey, the checks cleared. …

Former Seahawks running back Marshawn Lynch, a malcontent as a player now embraced as a media darling, was arrested in Las Vegas on suspicion of driving while intoxicated. An arrest report said officers found Lynch asleep and smelling of alcohol in an “undrivable” sports car, with a front wheel missing and the rear driver’s side and other wheels badly damaged. It also said police officers “had to use a restraint chair to force a blood draw.” No doubt Lynch’s behavior will be excused in no time, and he’ll continue to be embraced by some media outlet willing to enable all of this. …

Chargers coach Brandon Staley skipped a practice on Tuesday to be with his youngest son, who was having surgery to treat a fractured toe and possible infection, Priorities in order in L.A. …

Falcons rookie receiver Drake London, the No. 8 overall pick, left Atlanta’s preseason opener with a knee injury, though it’s reportedly not believed to be serious.

“I have such a beef with them right now. They won’t let me pick my own [hat]. I don’t want to go too hard and get fined or anything but trust me, I’m upset about it.” – 49ers head coach Kyle Shanahan, to KNBR 680 San Francisco, on the NFL’s rules that prevent him from wearing a hat from previous years on the sidelines during games.