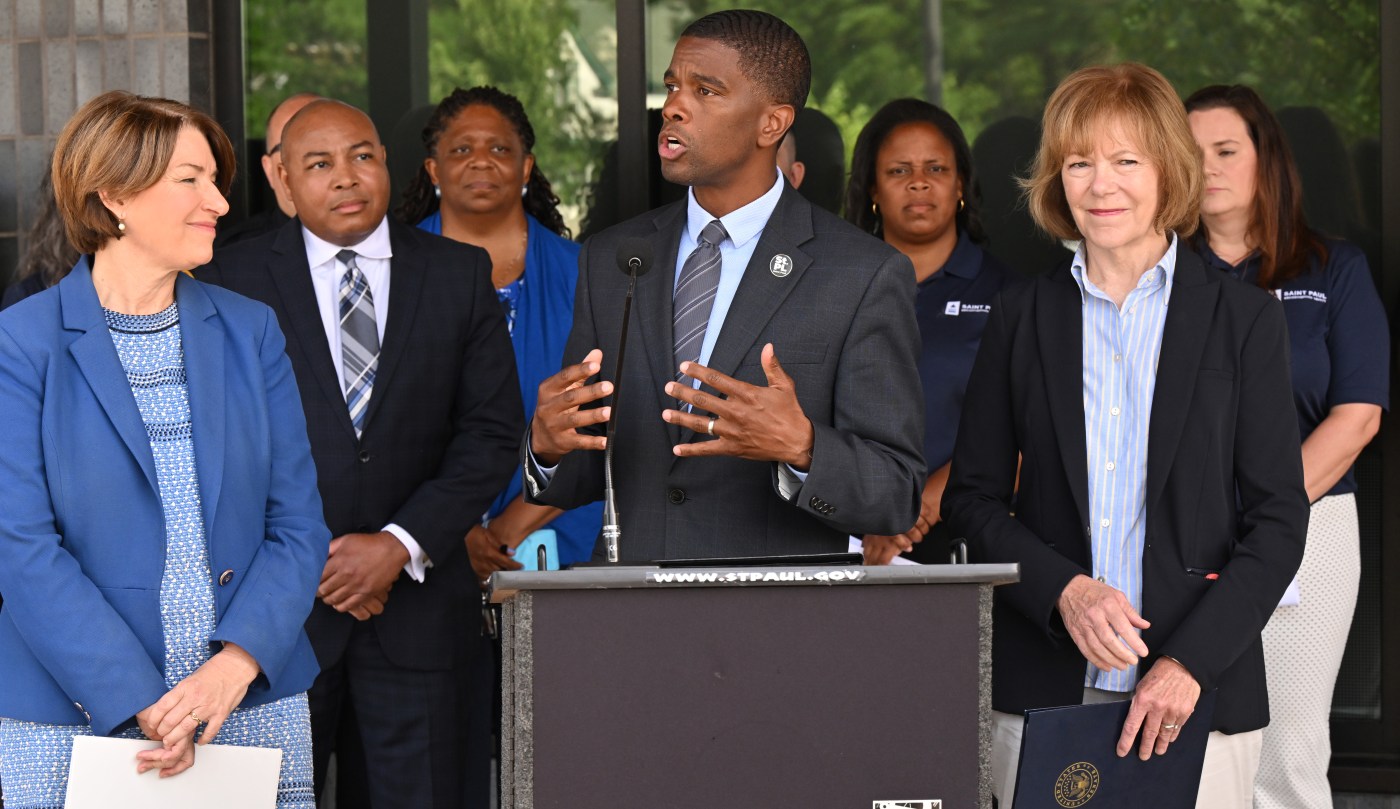 Backed in part by funding from the federal American Rescue Plan Act, the approaches package both new and existing outreach programs under the city’s new Office of Neighborhood Safety, which is led by former Metro Transit Police Officer Brooke Blakey, alongside initiatives of the St. Paul Police Department, St. Paul Parks and Recreation and other key players.

Those efforts, some of which have yet to be approved for funding by the St. Paul City Council, will range from hiring additional police officers to issuing $4 million in grants to fund community-led public safety initiatives, as well as traffic calming and an external review of public safety needs in the St. Paul Public Library system.

“So much of this is a coordinated approach,” said Klobuchar, a former Hennepin County Attorney. “St. Paul gets it.”

The programs ready to launch include “Project Peace,” an effort to reduce retaliation for street crime by connecting individuals and families impacted by gun violence with mental health support and other holistic intervention services.

Carter said the project, designed over several months, will be led by social service workers and community-based partners, and will focus “direct, sustained and persistent engagement with a small number of group-involved individuals.”

“The last letter in the acronym ‘Peace’ stands for enforcement,” said Interim St. Paul Police Chief Jeremy Ellison, who attended the mayor’s media event at the Frogtown Community Center off Como Avenue. “It’s at the end of the acronym for a specific and intentional purpose.”

“It really is about individuals who might be victims of violence or potential perpetrators of violence,” said Blakey, in a brief interview following the press conference. “It might be a family. The initial introduction might be from a 14-year-old son. It might be using mental health supports to help mom, or helping dad get his driver’s license.”

In addition, the city will hire a grants coordinator to work under Blakey and distribute $4 million in funding to community-based neighborhood safety initiatives, with grant recipients selected with the help of a 15-member Office of Neighborhood Safety Community Council. Blakey said beyond her own role, her staff currently consists of a staffer for the community council and an administrative worker.

In March, the mayor announced that the city would accept a $3.75 million “Community Oriented Policing Services” grant from the U.S. Department of Justice to hire up to 30 new St. Paul Police officers, a sizable portion of the 80 new officers planned across two police academies this year.

As part of the $10 million effort announced Friday, the city will match the federal COPS grant with $2 million.

A federal COPS grant to hire up to 30 new St. Paul Police officers. $4 million in community grants. A $1.5 million library intervention effort. $1 million for pedestrian safety. $1.5 million for Parks. And Project Peace, interventions for young people on a bad path with guns… pic.twitter.com/WSlDFAQOtc

Other key spending noted in written materials shared by the mayor’s office:

“Library Optimal Response,” $1.5 million: The St. Paul Public Library system will add a new staff role — safety specialists — and fund an external review and assessment of safety resources, with the goal of creating a public services safety plan for the libraries. Goals include enhancing a “community-care and trauma-sensitive approach to supporting youth and adult library users.”

Traffic-Pedestrian Safety, $1 million: The city will fund six aspects of the Comprehensive Pedestrian and Traffic Safety Plan, including a citywide crash study, temporary safety treatments at selection locations on busy arterial and collector roads, a review of traffic engineering policy consistent with best practices and a speed enforcement and education campaign. Funds will also help replace the city’s long-line striper or pavement marking machine, and a “secondary notification” system that would enable police to contact owners of vehicles with equipment violations that are not immediate public safety concerns.

Interim St. Paul Police Chief Jeremy Ellison says the last letter in Peace is “E” for enforcement… You need a lot of preventative interventions before you get there. pic.twitter.com/rHa8LeQmkx