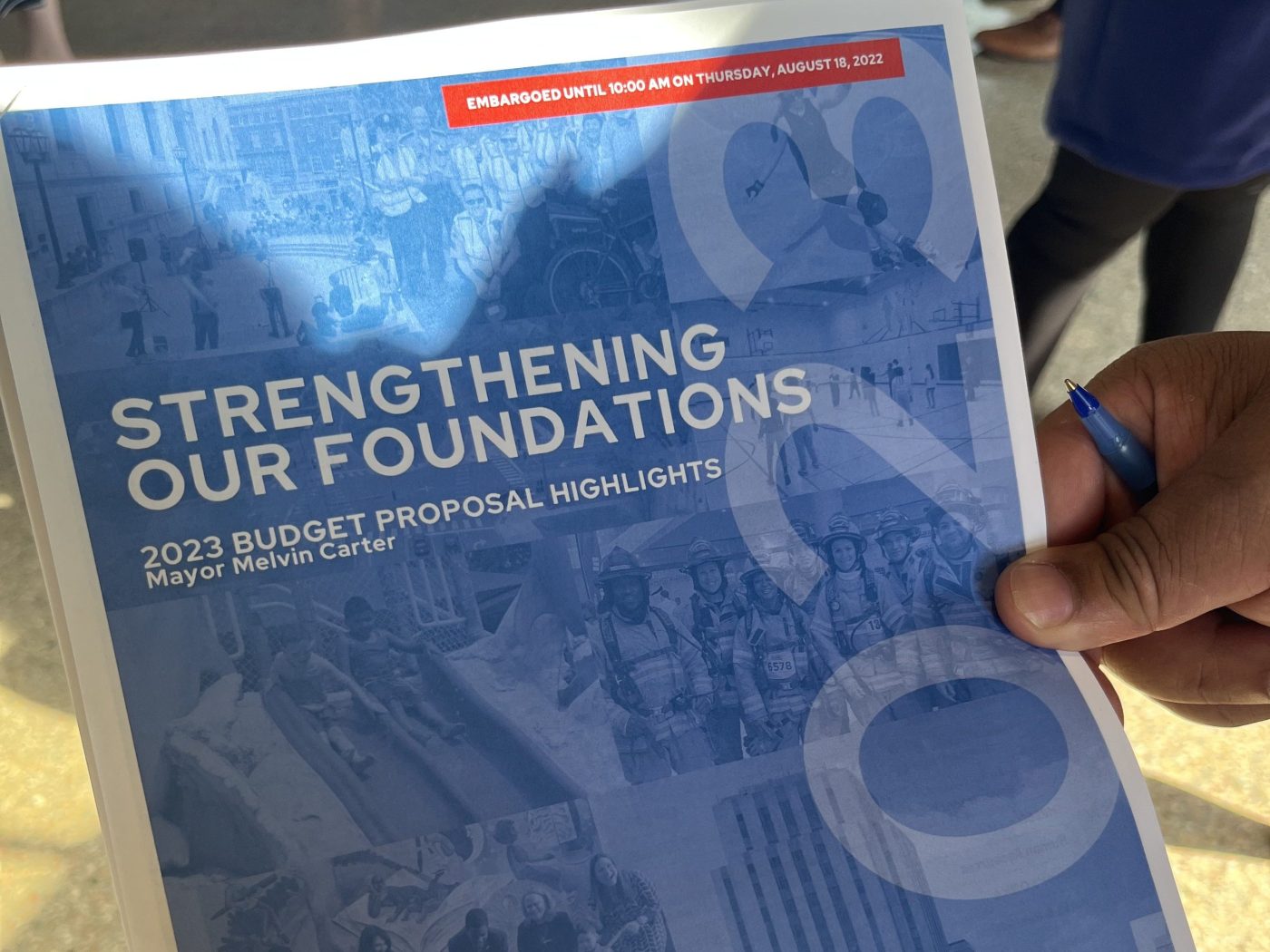 St. Paul Mayor Melvin Carter unveiled a budget proposal for 2023 that seeks to maintain rather than expand most city services, with few new cuts or frills.

That said, many property owners will still be in for sticker shock, in part as a resulting of shifting street maintenance costs from fees to property taxes. The property tax levy, or total amount of tax dollars collected citywide, would increase by 15.34 percent, or $26.9 million, the largest increase of Carter’s tenure in office.

If the city budget and tax levy are approved by the city council in December, the owner of a median-value St. Paul home would likely see a $231 increase next year in their property taxes. Fees for street sweeping, street lighting and seal coating work would disappear.

Carter, who is delivering his annual budget address Wednesday morning at Harriet Island’s Wigington Pavilion across from downtown, said the sizable increase was driven by two major factors. Roughly half the increase was spurred by a desire to maintain core services at existing levels despite inflationary pressures and growing labor costs. The mayor’s budget proposal calls for most city departments to add at least a single staffer, though several would add more.

WATCH LIVE: Carter’s budget address began at 10 a.m. and is expected to be livestreamed on the city’s Facebook page.

The mayor’s office would drop an FTE, leading to a total staff equivalent of 15 employees, and the Office of Technology Services would drop two, falling to 69 employees.

Carter said the other $13.6 million in tax levy spending reflected his office’s decision to move costs for street lighting, street sweeping and seal coating from a fee-for-service or assessment system over to property taxes, which are shouldered by and spread throughout all of the city’s taxable properties.

That decision, Carter said, was all but forced by a series of judicial rulings based on lawsuits against the city over street assessments, the latest coming last May. Ramsey County District Court Judge Robert Awsumb found that the city’s remaining street maintenance assessment program had treated the charges like fees issued to property owners to incur a special benefit, when in reality, he said, they benefit the city as a whole.

“The court finds that the (street assessment) is an exercise of the city’s tax powers,” wrote Awsumb at the time.

The city’s street maintenance program has long been the subject of legal battles waged by churches, nonprofits, owners of street corner properties and others unhappy with allegedly bearing financial costs that other cities spread throughout the tax base. At the end of 2017, the end of then-St. Paul Mayor Chris Coleman’s term in office, the St. Paul City Council approved a 24 percent tax levy increase that was heavily fueled by shifting much of the street maintenance program away from assessments and over to property taxes.

Since then, the mayor’s proposed tax levies have run the gamut. In 2021, Carter called for a 6.9 percent increase to the city tax levy. In 2020, his budget plan called for no levy increase at all. In 2019, the city council narrowly approved a 5.85 percent tax levy increase. Toward the end of 2018, Carter’s first year as mayor, the city council trimmed a proposed 11.5 percent hike to 10.5 percent.

While the cost of seal coating would move to the property tax levy, the city is still working through how to fund its more intensive mill-and-overlay system, according to a spokesperson for St. Paul Public Works.