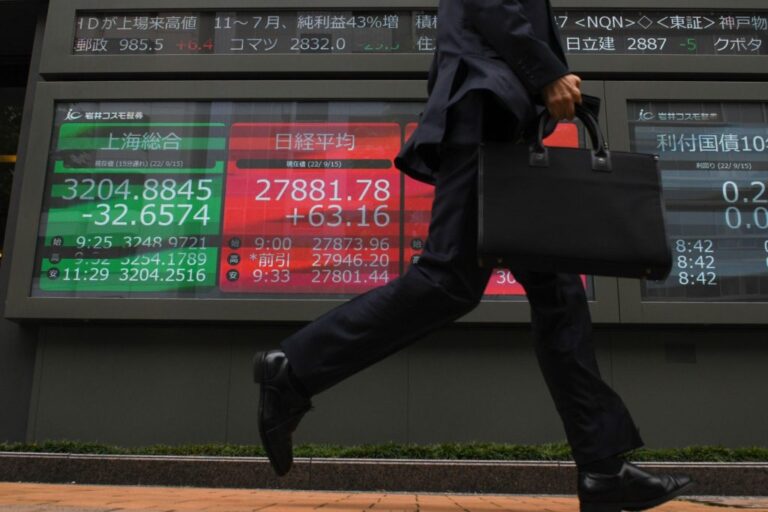 Global markets remained on edge Tuesday as investors braced for a heightened risk of global recession.

Stocks were mixed as Goldman Sachs Group Inc. and BlackRock Inc. turned more bearish on equities for the short term. Europe’s Stoxx 600 rebounded with US futures, while Asian shares fell.

Bonds remained under pressure in Europe and Asia as the worst selloff in decades intensified, while the benchmark 10-year Treasury yield held near the highest level since 2010 and UK notes gained.

The pound rose about 1%, following its drop to a record low Monday. Traders remained wary of the risk that the currency could slump to parity with the dollar after the Bank of England indicated it may not act before November to stem the rout.

Volatility across markets was also reflected by the risk of future price swings, which reached the highest since the beginning of the pandemic, as shown by a Bank of America index. The dollar gauge inched back from a record high Monday, when Federal Reserve officials repeated hawkish comments on policy. Asian currencies including the yen and yuan strengthened slightly, while staying around levels that have caused concern from authorities in Japan and China.

Read More: Fed Officials Say That Tackling Inflation Is Their No. 1 Job

“The market is pricing in some Fed increases, but we’re a bit worried that it might not be pricing in everything,” Laila Pence, president of Pence Wealth Management, said on Bloomberg Television. “Everyone is nervous.”