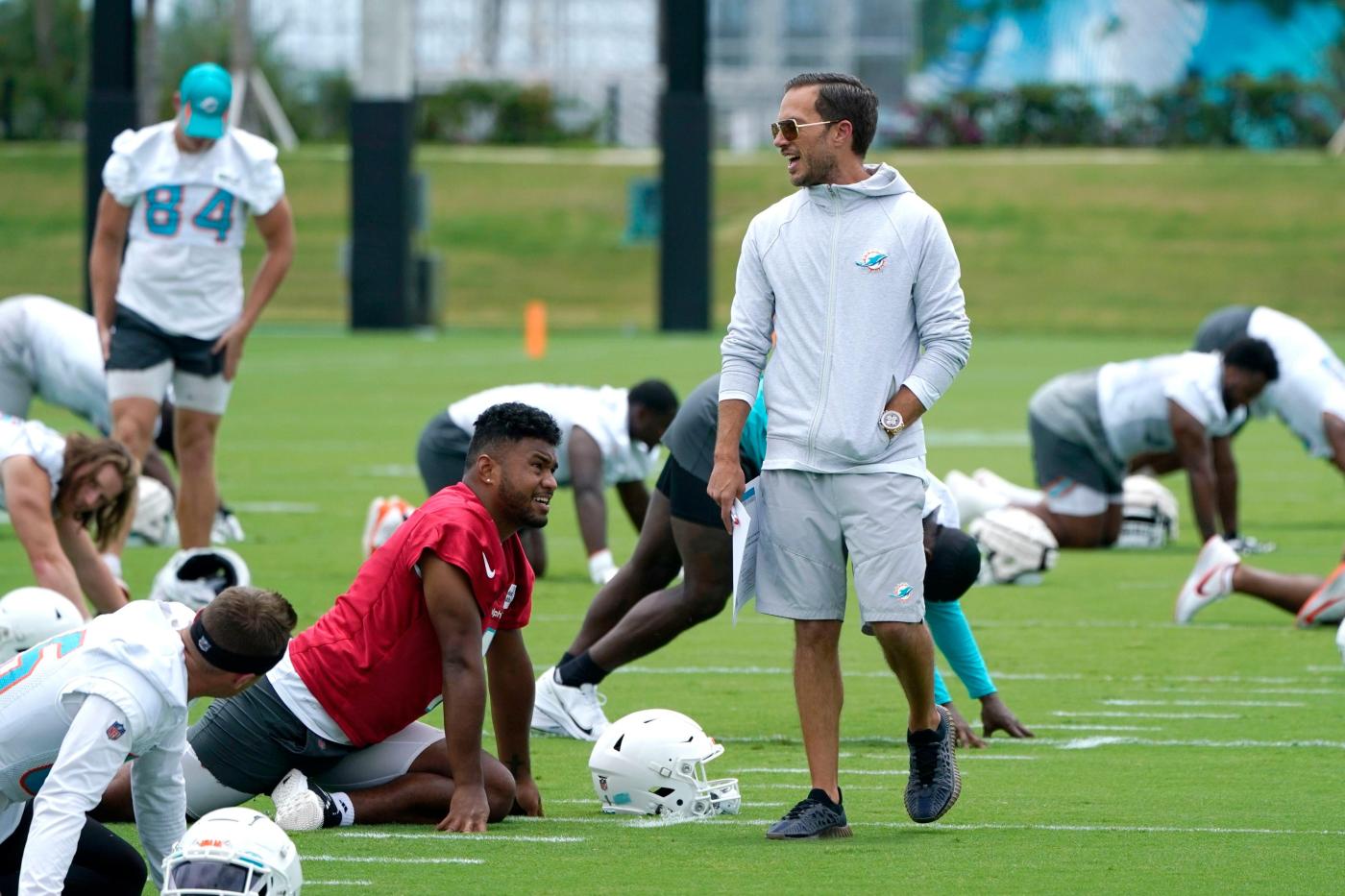 Here’s how well the South Florida Sun Sentinel thinks the Miami Dolphins will do in the 2022 season, and who our staff is picking to play in the Super Bowl:

They have speed in the right places on offense as Tyreek Hill and Jaylen Waddle are their most dynamic receivers since Mark Duper and Mark Clayton. They added a foundational piece to the line in tackle Terron Armstead. The defense will be a year more developed, too, but face some of the league’s best quarterbacks as opposed to the last half of last season. Depth and uncertain offensive line questions are still out there. Better? Definitely. A contending team? November will tell us.

The Bills were 13 botched seconds from the AFC Championship Game last year and so get the motivational gear to make it this year. It’s a stacked AFC, though, as Baltimore won’t be hurt like last year, Cincinnati improved off its great season, Las Vegas added to its foundation and any of eight or nine teams could make a run. The NFC isn’t nearly as tough. The Rams repeat because their top competition took steps back.

Sorry, but there’s going to be a learning curve with first-year coach Mike McDaniel and his offense, mostly because there are concerns about the offensive line, pass protection, and the running game. Quarterback Tua Tagovailoa is wait-and-see even though he’s equipped with wide receivers Tyreek Hill and Jaylen Waddle. The defense should be OK, led by ball-hawking Pro Bowl cornerback Xavien Howard. But depth and health are concerns on both sides of the ball whether it’s Tagovailoa, Howard, left tackle Terron Armstead or others, and once the inevitable injuries hit, problems will surface.

I’m not betting against Tom Brady. It’s not wise. I learned that while selecting preseason AFC East winners over the previous two decades or so when Brady was with New England. As for Buffalo, I like a feel-good story that’s grounded in realism. The plucky, small-market, four-time Super Bowl loser Bills would be a great story by going back to the Super Bowl, and finally getting a win. It could happen.

Between an improved offense, continuity on an already-stout defense, a competitive AFC and challenging start and finish to the schedule with a soft spot in the middle, the Dolphins see a one-game improvement from 2021. I’ll say it’s good enough for Miami to earn one of the wild-card playoff spots, finishing second in the AFC East, behind the Buffalo Bills and ahead of the New England Patriots. The Dolphins then go on the road and lose in the first round, possibly in a cold environment.

I just witnessed some concerns for the Bucs in joint practices with Dolphins this preseason, especially with the rebuilt offensive line, center Ryan Jensen’s injury and Tom Brady taking a personal leave from the team. But the Super Bowl is a long ways away. This has the feeling of one of those instances where Brady finds a way to pull through the drama and deliver for an eighth ring with what is still a loaded roster. The Bills take the next step by getting through the AFC for a first Super Bowl appearance since the early 1990s, but they fall to 0-5 all-time in the big game.

Who can really tell with this team? Maybe this is Tua Tagovailoa’s year, under the direction of a new coach full of confidence in him. Maybe the combo of Tyreek Hill and Jaylen Waddle changes everything. Maybe the defense builds on last year’s strong foundation. Maybe first-time head coach Mike McDaniel has the innovation, ability to adapt and just enough luck to push this team further than anyone expects. Or maybe not. I see the glass much more than half full.

It always comes down to this: I don’t know that I am strong enough to pick against Patrick Mahomes or Tom Brady. Sure, Buffalo is looking formidable and has something to prove, but quarterback Josh Allen does not have the playoff chops these two have. If the Chiefs can get through the strong AFC West, it’s only fitting they make it to the Super Bowl for one last Brady hurrah.

Tua Tagovailoa has more playmakers around him this season and star Tyreek Hill undoubtedly will be the third-year quarterback’s safety net at receiver. But prized free-agent acquisition Terron Armstead’s health and Connor Williams’ snapping issues at center are a concern, as is the struggling running game. The defense should be solid once again, but depth at cornerback and inside linebacker is a concern.

Buffalo came close to finally knocking off Kansas City in the playoffs last season and seems destined to return to the Super Bowl with star quarterback Josh Allen leading the way. That postseason experience, combined with several key offseason moves, should have the Bills on a collision course with the Tom Brady-led Buccaneers.

While I am predicting the same 9-8 I had last season, that just-over-.500 mark would represent a marked improvement as the Dolphins kick off the Tyreek Hill and Mike McDaniel era. The 2022 schedule could end up as one of the most difficult in franchise history when combining opponent win percentage (the club record is 1999′s .563) with the fact nine games will be played on the road. The offense will get excellent opportunities in the run game as teams give a ton of attention to Hill, Jaylen Waddle and the dangerous pass-game targets. The defense, which feasted on poor quarterbacks last year, was basically left the same, hoping that second-year jumps by pass rusher Jaelan Phillips and safety Jevon Holland provide enough of a bump forward for the unit.

The Rams, my NFC pick in this space last year, have me properly spooked regarding Matthew Stafford’s preseason elbow pain. Maybe it’s a smokescreen. The Eagles, who snuck into last year’s playoffs, have added a ton of talent the past two years, and are in the inferior conference. I could see an Eagles-Saints NFC Championship matchup. The Bills, an inexplicable 13 seconds away from hosting the AFC Championship last year, got better, adding pass rusher Von Miller and first-round-pick cornerback Kaiir Elam, but their schedule, like Miami’s, also looks to be a bear. If Josh Allen stays upright, the Bills finally make their fifth Super Bowl, and win.

Breaking down the Miami Dolphins’ 2022 schedule