Teddy Bridgewater to Dallas? Not so fast – 10 thoughts on Dolphins weekend – Twin Cities 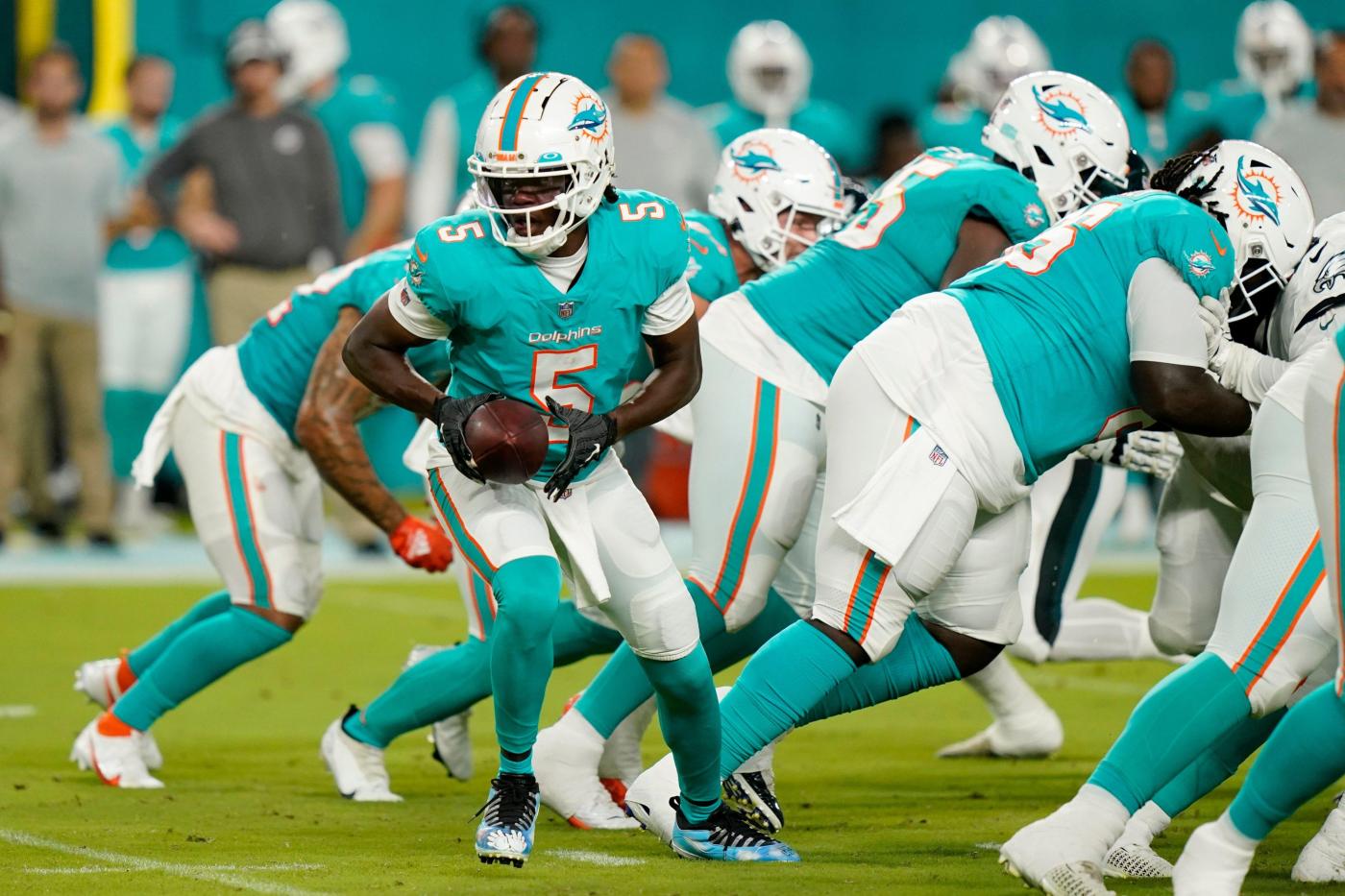 What would it take for the Dolphins to trade Teddy Bridgewater to the Dallas Cowboys as is being kicked around?

A second-round pick, for instance. That’d be the high bar. That might make a deal prohibitive – and that’s fine.

That’s because the Dolphins signed Bridgewater for one year at $6.5 million for the good reason that he’s a solid insurance policy to Tua Tagovaila’s durability questions.

Dallas is in the market for a quarterback with Dak Prescott out for at least four weeks with a thumb injury. Cooper Rush is their back-up. Their season was in trouble before this – once again. The Dolphins have a similar track record as the Dolphins since the change of the millenium: Two playoff wins.

Bridgewater wasn’t seen as a starter by any team this off-season. That’s why he’s on the Dolphins. He’s been in this role before, too, as he went 5-0 with New Orleans in replacing Drew Brees in 2019. Some will say the preseason play of Skyler Thompson could mean Bridgewater could be traded more easily to Dallas.

Let’s say Tagovailoa misses two or three games. This AFC is stacked with playoff contenders. Do you really want the season resting on a seventh-round rookie who shows promise rather than a veteran who has taken teams to playoffs?

A second-round pick. That’s the bar. That would help recoup some of the draft bounty spent on Tyreek Hill (and for the tampering charges). But I’d understand if they didn’t even want to trade Bridgewater at all.

2. It was some good, some bad for the offensive line. The team ran for a measly 65 yards. But the pass-blocking? Tua Tagovailoa had an average 2.92 seconds to throw, as NextGenStats.com measured. It’s just one game, but it ranked 10th in the league and is a big improvement if it holds. Last season, Tua had a third-worst 2.52 seconds to throw. So Sunday was a notable difference and translated into other numbers like the air yards of his passes rising from a bottom-feeding 5.1 yards last year to 6.2 yards on Sunday (ranked 12th in league). Re-watching the game: Tackle Terron Armstead was as good as expected and center Connor Williams had a good game, too. After that? There’s work to do.

3. You saw Monday why the Dolphins’ Mike McDaniel got deserved praise for going for it on fourth down just before half and was rewarded with a 42-yard touchdown. Denver’s Nathaniel Hackett showed playing Madden isn’t preparation for some decision-making. Facing fourth-and-five with about 48 seconds left, Hackett decided to attempt a 64-yard field goal rather than put the ball in the quarterback’s hands they just paid $250 million. Russell Wilson stood out there, letting the clock tick down to 20 seconds Monday night in Seattle before using the first of the team’s three time-outs. The field goal missed. The game was lost. That was a first-time coach looking like it.

4. Speed? Jaylen Waddle was the fifth-fasted player on a NFL field this first week in running 20.8 mph on his 42-yard touchdown catch. Tyreek Hill had the 10th-fastest speed at 20.3 on an 18-yard reception. Hill, especially, can go faster, but this is what defenses will have to be aware of all season. Here’s the thing: There’s speed across this roster. Cornerback Keion Crossen (22.05 mph) recorded the second-fastest speed in a game this weekend as recorded by NextGenStats.com.

5. Seattle fans are the pits of the world for booing Wilson, who spent a decade as the face of that franchise and won a Super Bowl there.

6. The Dolphins offense is a work in progress, and New England is a good, disciplined defense. But you understand how much the Dolphins defense won Sunday when you roll around the offensive stats: 13 points, 307 yards, two plays for more than 25 yards (Waddle’s 42-yard touchdown and Hill’s 26-yard catch that he took from a Patriots defender). They can have that kind of game in a loss and we’ll be wondering what’s wrong with the offense.

7. Yeah, the statute of limitations might be running out on this, but time only underlines that the Minkah Fitzpatrick trade might go down as the worst in Dolphins history. It’s could be a toss-up with Anthony Carter being traded to Minnesota for linebacker Robin Sendlein. Fitzpatrick had a pick-6 and blocked a would-be winning extra point to lead Pittsburgh to an overtime win against Cincinnati. He’s a two-time All-Pro player. Repeat: All-Pro, not the watered-down Pro Bowl stuff. He’s 25. Yes, Jevon Holland is on pace to be a great safety. But the idea is to accumulate as many great players as possible – not discard them. Fitzpatrick didn’t like the linebacker-heavy role Brian Flores put him in 2019. Flores pushed to trade him and the organization went along with it. Now Flores is a linebackers coach on the Steelers where Fitzpatrick is a star. The Dolphins got the draft pick that became tackle Austin Jackson to show for it.

8. The Patriots look like a six-win team with that offense. And that’s only because they get to play the New York Jets twice.

9. The Dolphins had Xavien Howard on Devante Parker all game Sunday. That told you they think Parker is their top threat. He had one catch for nine yards and Howard deflected a ball for an interception (he was called for holding on Parker). That’s what you’d expect – a win for Howard.

10. On To Baltimore: The Ravens are four-point favorites. They had an easy win against the Jets, but lost former Dolphins tackle Ja’wuan James (Achilles) and cornerback Kyle Fuller (ACL) on Sunday.