The "Paper Girls" Cast Address the Possibility of a Season 2 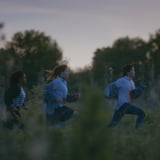 Prime Video’s adventure series “Paper Girls” has something for everyone: coming-of-age stories, complicated friendships between girls, sci-fi wars, time travel, and much more. The eight-episode first season has gotten plenty of buzz, but will that be enough to bring it back for season two? Right now, it’s still a little too early to tell. The first season only started streaming on July 29, so it’ll probably be well into fall before Prime Video makes an announcement one way or another. “Paper Girls” is based on a 30-issue comic-book series, so there’s definitely plenty more material to explore . . .