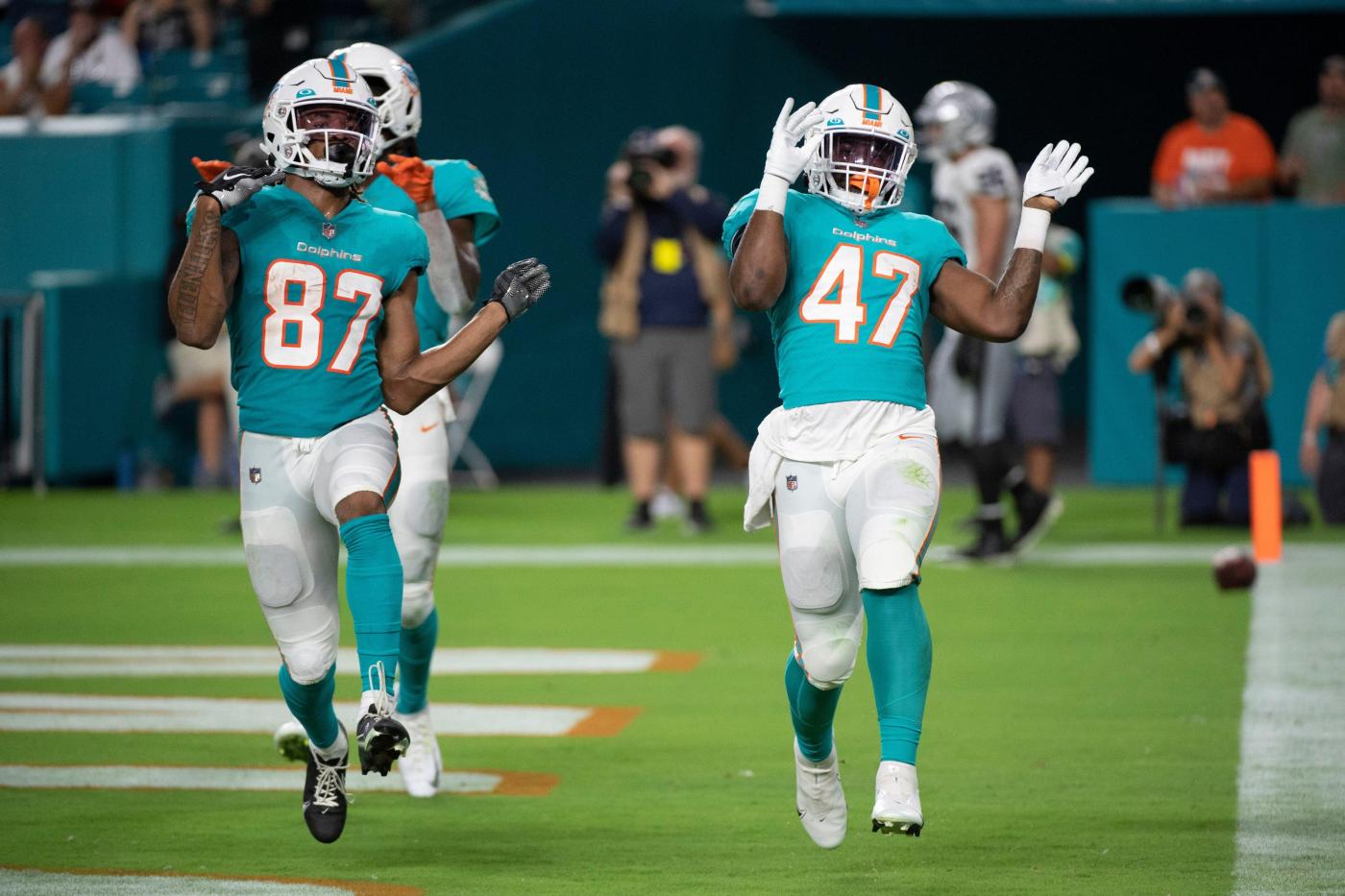 The fourth week of training camp for the Miami Dolphins provided a return to intrasquad practices between two weeks of joint sessions against NFC teams — Tampa Bay Buccaneers the week prior and Philadelphia Eagles this coming week.

But after the Dolphins rested most starters in the preseason win over the Bucs and presumably will for the final exhibition against the Eagles, Saturday’s preseason loss to the Las Vegas Raiders presented what will likely be the most extensive preseason look at this team with its starters on the field.

Here are 10 things we learned this past week and in the 15-13 exhibition loss to Las Vegas:

Ups and downs for Tua

Tua Tagovailoa went through a week where he threw six interceptions over three practices. That’s not the end of the world, especially after such a strong training camp before the run of turnovers. Many were in simulations of late-game situations where he had to force throws downfield into coverage with time running out, and you prefer him testing his limits in practice before trying to squeeze those throws in during regular-season games. Tagovailoa was 6 of 8 for 58 yards in two drives that netted 3 points against Raiders backups without his top two wide receivers. What was encouraging was seeing Tagovailoa’s preparation and commitment to his craft pregame. He was out on the Hard Rock Stadium field alone more than four hours before kickoff Saturday, envisioning different scenarios for different plays in a personal walkthrough — a sign of his dedication toward improvement.

Where does tight end Mike Gesicki stand in this offense? He’s a valued piece worthy of the franchise tag, but ahead of a prove-it season for him to earn a long-term extension, he’s still being run out onto the field in preseason games far longer than other starters of his caliber. Gesicki played 25 snaps, 44 percent of the Dolphins’ offensive snaps, even starting the second half. He said postgame he needs the reps, learning a new offense and essentially learning a new position as a true tight end after previously lining up out wide more often.

It was already a concern last week, and it’s only trending deeper in that direction. Nik Needham, Keion Crossen and the newly signed Mackensie Alexander all sustained injuries in Saturday’s game — this after the team lost promising second-year cornerback Trill Williams for the season to a knee injury last week. Byron Jones is still on the physically-unable-to-perform list. The Dolphins need healthy contributors beyond All-Pro Xavien Howard. Noah Igbinoghene has had his opportunity, but he gave up a couple of the key catches on the opening series where Miami allowed a touchdown with most defensive starters in.

Ground game still not up and running

It’s very basic run concepts the Dolphins are showing and not the patented misdirection in coach Mike McDaniel’s run game that will open up lanes for the backs, but 4 rushing yards in the first half is “not very much,” as McDaniel put it. Four of the starting linemen played early, as did tailback Chase Edmonds. When Miami had a second-and-1 in Raiders territory in the second offensive series, Sony Michel was stuffed twice on opposite sides of the line and left tackle Larnel Coleman, playing for standout free-agent addition Terron Armstead, committed a false start on fourth-and-1.

Jevon Holland is a Pro Bowler in the making

The second-year safety saw limited action on Saturday, but his practice week was representative of the type of game-changer he is as a ball-hawking free safety. Holland had four of the interceptions against Tagovailoa during the week of practice. He covers so much ground on the back end and is incredibly instinctive to jump routes anywhere in his vicinity.

Tagovailoa was excited to see it was the rookie wide receiver following him up for a podium press conference following Saturday’s exhibition. The fourth-round draft pick earned the shine with six receptions for 114 yards from backup quarterbacks Teddy Bridgewater and Skylar Thompson. He got separation on some, made contested catches on others and showed the different facets to his game. That’s how Ezukanma has looked for much of camp before slowing down in the past week. It was encouraging to see him respond after a quiet few practices.

While the run game overall was not explosive, it’s clear Edmonds will still get opportunities in the passing game, being the dynamic playmaker that he is. With Raheem Mostert sitting, Edmonds made two catches for 21 yards during Tagovailoa’s two drives. One was a 17-yard gain across the field after Tagovailoa bought time, and the other was a key third-and-3 conversion after Tagovailoa went through his progression to find the tailback in the flat.

A look at Bridgewater, Thompson

Saturday offered a first glance at Teddy Bridgewater in a game setting as a Dolphin. He made some impressive throws to Ezukanma and undrafted rookie Braylon Sanders, but he was 10 of 20 for 119 yards and took a safety on an intentional grounding penalty in the end zone. Thompson was a true bright spot late, going 9 of 10 for 129 yards, several connections with Ezukanma and the touchdown pass to undrafted rookie running back ZaQuandre White. He’s made a case for the Dolphins to secure him on the active roster as a third quarterback to keep other teams from snagging him before he can be stashed on the practice squad.

Dolphins fans will have to wait to see new star wide receiver Tyreek Hill in a game-like atmosphere, but it wasn’t for injury concern that he rested Saturday. Jaylen Waddle missed all three practices this past week in a preventative measure for what McDaniel considered a minor undisclosed injury. Armstead, after increasing his practice workload coming off offseason knee surgery, did not participate in team drills on Wednesday and missed Thursday’s practice entirely.

Sanders no longer perfect in preseason

Dolphins kicker Jason Sanders made his first six preseason field goals with three from beyond 50 yards. However, he missed from 46 yards off the upright with less than two minutes remaining in Saturday’s exhibition. His field goal percentage has oscillated up and down in alternating seasons through his first four years. If that trend continues, he’s due for an accurate 2022 season after a down 2021.