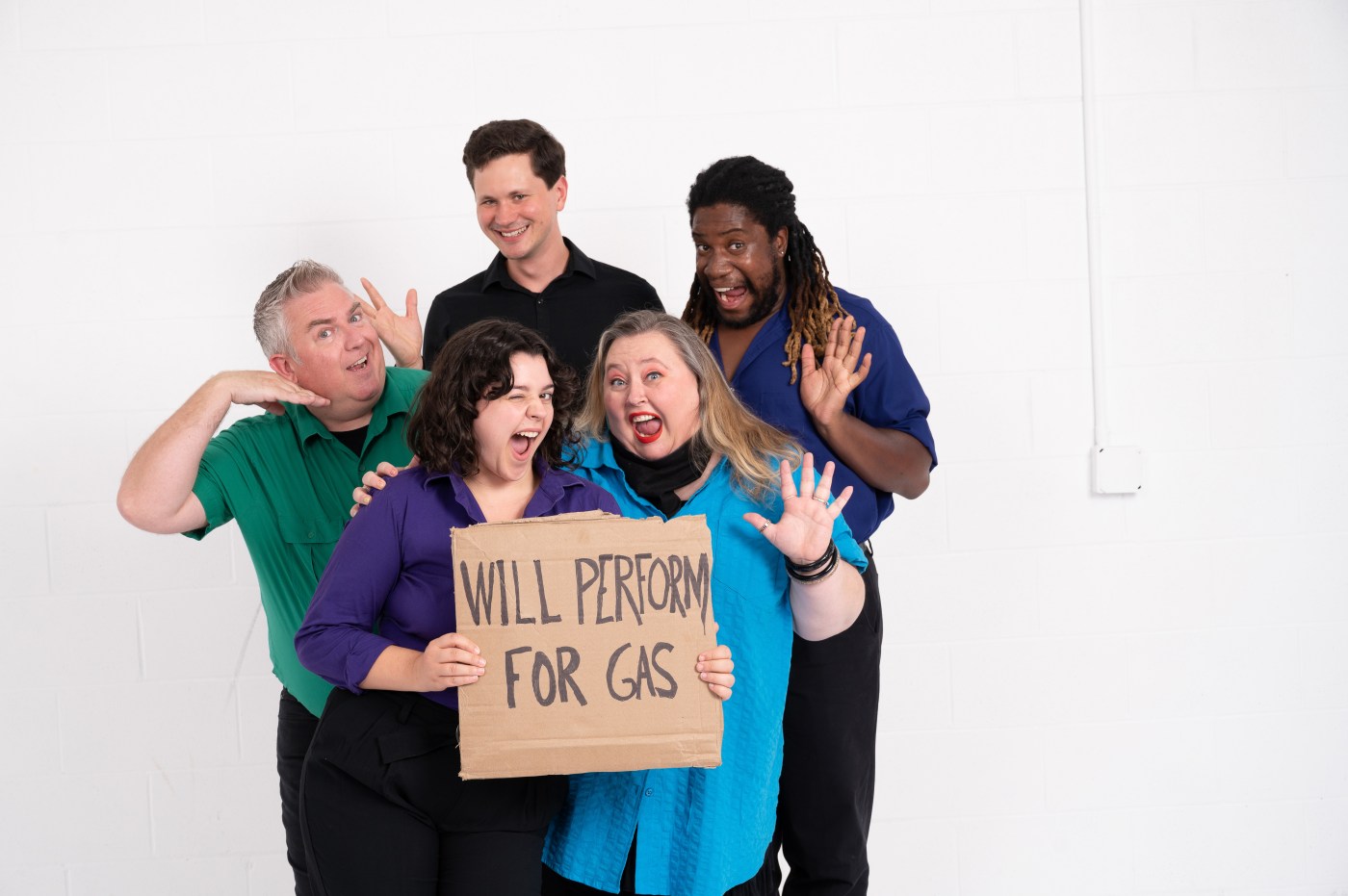 After 60-plus years presenting sketch comedy somewhere on Minneapolis’ Hennepin Avenue, Brave New Workshop’s undergone some changes. We lost the company’s founder and longtime leader, Dudley Riggs, in September of 2020, at the age of 88. That local legend was so synonymous with his comedy theater that there are still those who refer to it as “Dudley Riggs.”

Then, last December, the Hennepin Theatre Trust purchased Brave New Workshop while vowing that its mission of satire and improvisation would remain intact. And, judging from the company’s latest production, it seems the Trust is keeping comedy lovers’ trust.

For “This Show is Cheaper Than Gas” is unmistakably a Brave New Workshop show. The format’s changed little since 1961, the troupe delivering skits and songs on trending topics, loosely clinging to some sort of agreed-upon theme. As in most BNW revues, some sketches work better than others, but the ones that truly succeed more than make up for the few that fall flat. And it feels good to have this comical crew — most of them holdovers from the pre-COVID era — again encouraging us to laugh at life’s difficulties.

It certainly helps to have a couple of the company’s mainstays maintaining the Riggs tradition. One is director Caleb McEwen, who keeps the pace brisk in this 100-minute show. Another is Lauren Anderson, one of the Twin Cities’ foremost funnywomen, who’s been creating memorable characters on the Brave New Workshop stage for decades, adding a couple of new gems to the list in this show.

At the other end of the experience spectrum is Isabella Dunsieth, who makes her company debut and provides just the kind of spark one ideally seeks from fresh blood. In the show’s opening sketch, she’s presented as a Pollyanna who clashes with the cast’s cynicism before her enthusiasm proves infectious.

Her “Sing Out Our Problems” is the first of a handful of songs in the revue, the best coming when Musical Director Jon Pumper employs his economics degree to cleverly explain the current inflation cycle via a singing and dancing Benjamin Franklin (Doug Neithercott).

Even if a visit to a boutique gas station, lunch with economically oblivious Minnetonka moms, and a THC-laden jaunt around Southdale don’t work as well as they could, the show’s second half rewards your patience. That’s when Anderson starts to shine, first as a contestant on a game show called “Go Woke, Go Broke” who morphs from innocent to indignant under a barrage of Republican talking points.

But, in her finest role, she’s… a uterus. Not just any uterus, but a sort of variation on the title character in Shakespeare’s “Henry V.” While employing Elizabethan parlance, she charismatically marshals another fortunate few or band of brothers for battle, these being her fellow elements of the female reproductive system. (“Hail, Cervix!”) Together, they march upon the Supreme Court in the show’s memorable climax.

Granted, this production could use a bit more balance, both in the quality of its material and in the performers’ volume levels: Denzel Belin bellows about half-again louder than anyone else on stage when he doesn’t really have to in such a small venue. But, as is often the case in a “Riggs revue,” something will come along that’s imaginative and funny enough to eclipse any shortcomings.

‘This Show is Cheaper Than Gas’