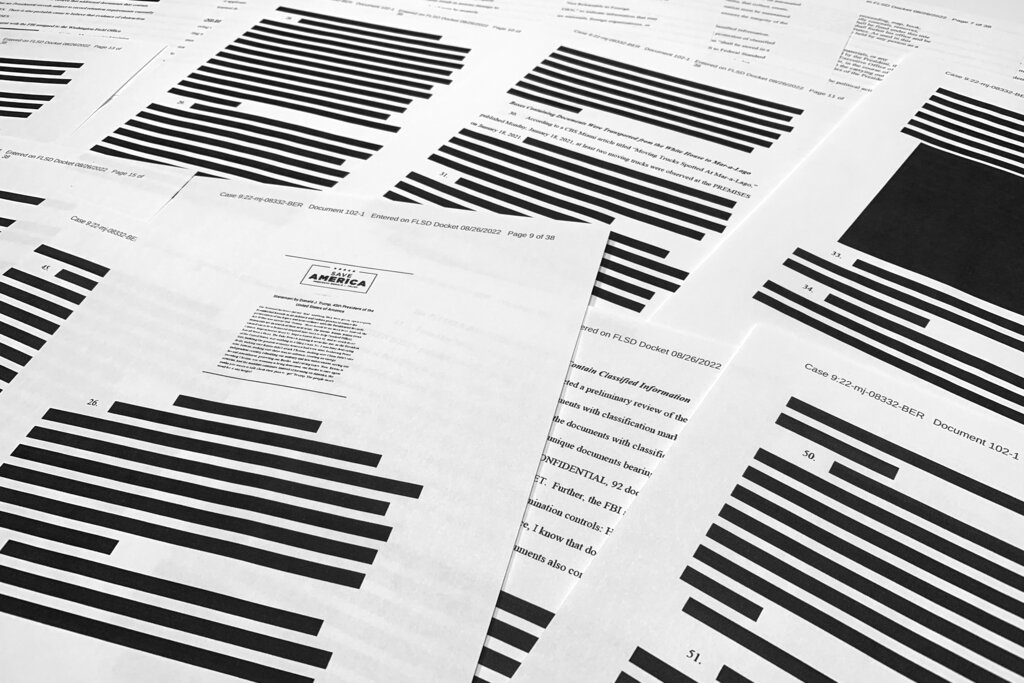 WASHINGTON — Fourteen of the 15 boxes recovered from former President Donald Trump’s Florida estate early this year contained classified documents, many of them top secret, mixed in with miscellaneous newspapers, magazines and personal correspondence, according to an FBI affidavit released Friday.

No space at Trump’s Mar-a-Lago estate was authorized for the storage of classified material, according to the court papers, which laid out the FBI’s rationale for searching the property this month, including “probable cause to believe that evidence of obstruction will be found.”

The 32-page affidavit — heavily redacted to protect the safety of witnesses and law enforcement officials and “the integrity of the ongoing investigation” — offers the most detailed description to date of the government records being stored at Mar-a-Lago long after Trump left the White House. It also reveals the gravity of the government’s concerns that the documents were there illegally.

The document makes clear how the haphazard retention of top secret government records, and the failure to return them despite months of efforts by U.S. officials to get them back, has exposed Trump to fresh legal peril just as he lays the groundwork for another potential presidential run in 2024.

“The government is conducting a criminal investigation concerning the improper removal and storage of classified information in unauthorized spaces, as well as the unlawful concealment or removal of government records,” an FBI agent wrote on the first page of the affidavit in seeking a judge’s permission for a warrant to search the property.

Documents previously made public show that federal agents are investigating potential violations of three federal laws, including one that governs gathering, transmitting or losing defense information under the Espionage Act. The other statutes address the concealment, mutilation or removal of records and the destruction, alteration or falsification of records in federal investigations.

Trump has long insisted, despite clear evidence to the contrary, that he fully cooperated with government officials. And he has rallied Republicans behind him by painting the search as a politically motivated witch hunt intended to damage his reelection prospects. He repeated that refrain on his social media site Friday, saying he and his representatives had had a close working relationship with the FBI and “GAVE THEM MUCH.”

The affidavit does not provide new details about 11 sets of classified records recovered during the Aug. 8 search at Mar-a-Lago but instead concerns a separate batch of 15 boxes that the National Archives and Records Administration retrieved from the home in January. The National Archives then sent the matter to the Justice Department, indicating in its referral that a review showed “a lot” of classified materials, according to the affidavit.

The affidavit argues a search of Mar-a-Lago was necessary due to the highly sensitive material found in the boxes recovered by the National Archives. Of 184 documents marked classified, 25 were at the top secret level, the affidavit says. Some had special markings suggesting they included information from highly sensitive human sources or the collection of electronic “signals” authorized by a special intelligence court.

Some of those classified records were mixed with other documents, including newspapers, magazines and miscellaneous print-outs, the affidavit says, citing a letter from the Archives.

Douglas London, a former senior CIA officer and author of “The Recruiter,” said this showed Trump’s lack of respect for controls. “One of the rules of classified is you don’t mix classified and unclassified so there’s no mistakes or accidents,” he said.

The affidavit shows how agents were authorized to search a large swath of Mar-a-Lago, including Trump’s official post-presidential “45 Office,” storage rooms and all other areas in which boxes or documents could be stored. They did not propose searching areas of the property used or rented by Mar-a-Largo members, such as private guest suites.

The document notes that no space at Mar-a-Lago had been authorized for the storage of classified information at least since the end of Trump’s term in office.

The FBI submitted the affidavit, or sworn statement, to a judge so it could obtain the warrant to search Trump’s property. Affidavits typically contain vital information about an investigation, with agents spelling out the justification for why they want to search a particular property and why they believe they’re likely to find evidence of a potential crime there.

Affidavits routinely remain sealed during pending investigations. But in an acknowledgment of the extraordinary public interest in the investigation, U.S. Magistrate Judge Bruce Reinhart on Thursday ordered the department by Friday to make public a redacted version of the affidavit.

In a separate document unsealed Friday, Justice Department officials explained that it was necessary to redact some information to “protect the safety and privacy of a significant number of civilian witnesses, in addition to law enforcement personnel, as well as to protect the integrity of the ongoing investigation.”

The second half of the affidavit is almost entirely redacted, making it impossible to discern the scope of the investigation or where it might be headed. It does not identify by name any people who may be subjects of the investigation and it does not answer core questions, such as why top secret documents were taken to Mar-a-Lago at the end of the president’s term even though the government regards them as presidential records that belong to the National Archives and require special storage.

It also does not include details about the interactions between Trump representatives and the Justice Department in the months leading up to the search, including a subpoena in May for records and a visit to the property in June by the department’s top counterintelligence official. The back-and-forth culminated in the Aug. 8 search in which agents retrieved the 11 sets of classified records.

Still, the document unsealed Friday does offer insight into arguments the Trump legal team is expected to make as the case moves forward. It includes a letter from Trump lawyer M. Evan Corcoran in which he asserts that a president has “absolute authority” to declassify documents and that “presidential actions involving classified documents are not subject to criminal sanction.”

Mark Zaid, a longtime national security lawyer who has criticized Trump for his handling of classified information, said the letter was “blatantly wrong” to assert Trump could declassify “anything and everything.”

“There are some legal, technical defenses as to certain provisions of the espionage act whether it would apply to the president,” Zaid said. “But some of those provisions make no distinction that would raise a defense.”