Incoming Prime Minister Liz Truss has drafted plans to fix annual electricity and gas bills for a typical UK household at or below the current level of £1 971 ($2 300).

In discussions with her team and government officials in recent days, Truss has settled on a mechanism that will avert the massive increase in energy bills that is due to kick in at the start of next month under the existing pricing system, according to officials and advisers to Truss who were briefed on the plan. The policy could cost as much as £130 billion over the next 18 months, according to policy documents seen by Bloomberg.

Energy bills in the UK were due to jump 80% from October to £3 548 a year for the average household, forcing many poorer families to choose between heating their homes and other basics. Under the plans drawn up by Truss’s team, that pricing regime will effectively be abolished and the energy regulator Ofgem will be sidelined. Instead, ministers will set a new unit price that households will pay for electricity and gas, the people said.

The pound rose relative to most major currencies following the report and was 0.4% higher against the dollar in Asian trading, marking a second straight day of gains for the first time since July.

Truss is due to travel to Balmoral Castle in Scotland on Tuesday to meet Queen Elizabeth II before officially taking office as the successor to Boris Johnson as British prime minister. She’s under pressure to come up with a solution to surging energy prices that are crushing families and businesses in the UK as Russia shuts off gas supplies to Europe in response to the sanctions imposed following its invasion of Ukraine.

Sterling market had tumbled in the weeks before Truss’s victory with investors wary of her plans to cut taxes despite the inflation pressures that have hit the pound. The yield that investors demand to lend to British companies has risen to its highest level in a decade. 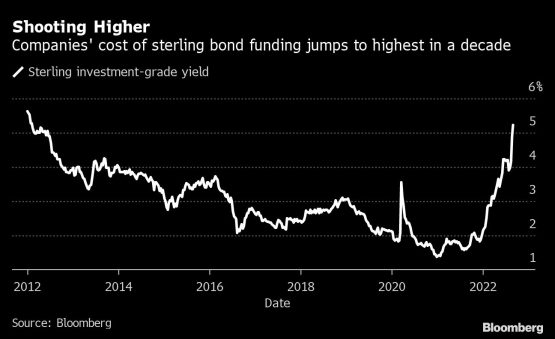 Under Truss’s plan, energy suppliers will be obliged to charge households a reduced rate for their energy and the government will guarantee financing that will cover the difference with what they would have charged under the previous system, according to documents seen by Bloomberg.

Jacob Rees-Mogg, who is set to become Business Secretary in Truss’s government, held talks with the chief executives of energy companies Monday to discuss the plans. The companies were receptive to the idea, which means they will avoid a windfall tax and see the shortfall in their revenue covered by the taxpayer, a person present said.

During the campaign to lead the governing Conservative Party Truss had already pledged to remove a green levy of about £150 a year from bills while the previous administration had promised another £400 in government subsidies to help families. Added together with the new aid package, the average household will effectively see their bills frozen, the officials said.

The price that energy companies are allowed to charge consumers will be set by ministers will likely be reviewed every quarter, the person added.

As recently as last week, Truss had wanted to extend the existing support package put in place by former chancellor Rishi Sunak from £400 per household to £1 000. However, after lengthy internal discussions, it was decided this would not be enough and she had to go further, according to an aide.