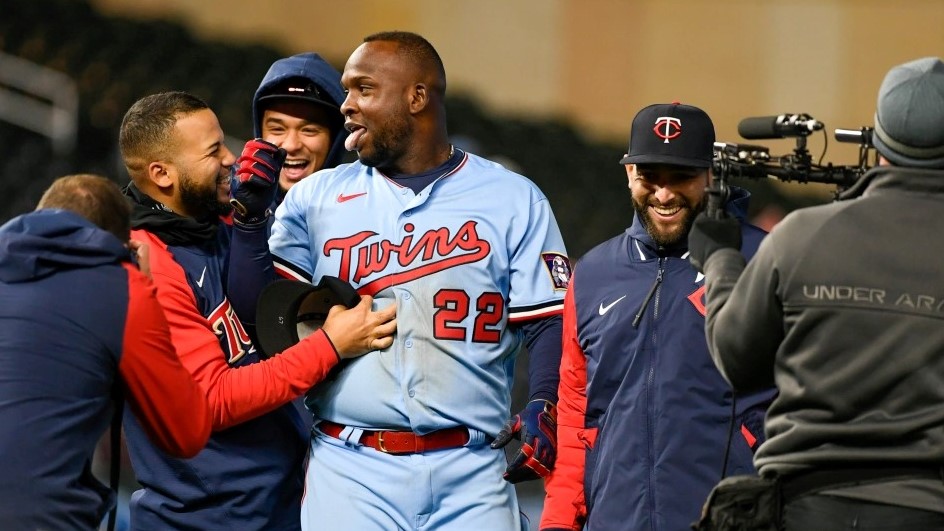 The rain that delayed the start of Tuesday’s Saints game at CHS field for over an hour, and the subsequent showers thinned the crowd considerably by the time Miguel Sano stepped to the plate in the second inning. But those who stuck around got at least a glimpse of what they had hoped to see.

Sano, making his first appearance with the Saints as he continues his rehab from a knee injury, drilled a line drive to right-center field to score a pair of runs to give the Saints a 4-3 lead over the Toledo Mud Hens in the second inning. The tarp returned to the field soon after.

After another lengthy delay the game was suspended, scheduled to resume at 5:05 Wednesday night, with the regularly scheduled game to follow.

Batting third in the order as the Saints’ DH, the 29-year-old Sano walked in his first at-bat and scored from second on a double by Mark Contreras to give the Saints a 2-0 lead over Toledo. Michael Helman led off the inning with a home run.

“I try to stay short to the ball and hit the ball up the middle or the opposite way,” Sano said of his at-bats. “And I try to drive the ball. I’ve been feeling great the last couple of days.”

The 6-foot-4, 282-pound Sano was placed on the 10-day injured list on May 2 due to a left knee sprain. He was transferred to the 60-day IL on May 14 when it was determined he had a torn meniscus that would require surgery.

He began his rehab on July 4 with five games with the Florida Coast League Twins, where he went 5 for 16 with two home runs and four runs batted in. He said facing Triple-A pitching wasn’t much different than what he saw in Florida.

“More important is that you go out and compete with everybody,” he said, “and show the people what you’ve got and what you’re doing.”

Sano said he still feels a little pain in the knee, but it’s not anything he can’t play through.

“It’s probably my mentality, what I have in my mind,” he said. “But running and everything, I feel great.”

Sano played some first base during his rehab in Florida and said he expects to see time at first with the Saints as well. As for the timetable for his return to the Twins, Sano said it is up to the team to decide. But he added that he hopes to be back before the all-star break.

Sano, who is 11th on the Twins’ all-time home run list with 162, has spent time on the disabled list every season since 2017. Most recently, he missed two weeks with a right hamstring strain early last season. He went on to appear in 135 games, batting .223 with 30 home runs and 75 RBIs.