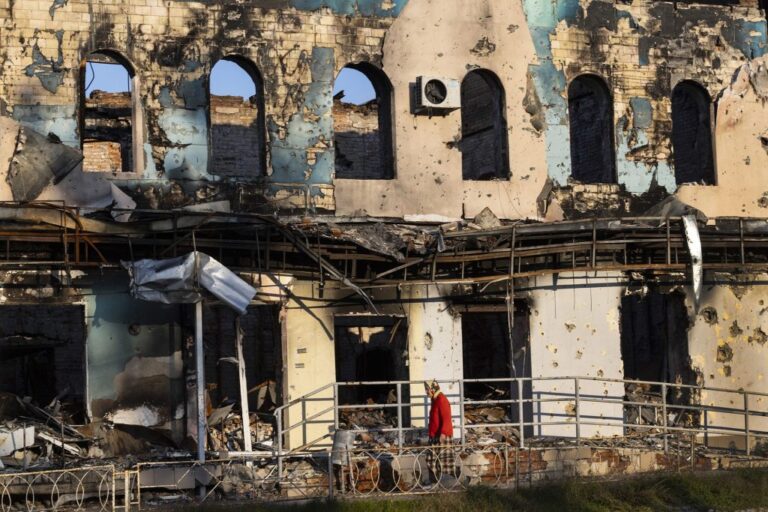 Voting continues in four occupied territories on whether to join Russia. The referenda have been slammed by Kyiv and its allies as shams, reminiscent of a ballot in Crimea in 2014 ahead of annexation, as Russia attempts to annex a large swath of its neighbour including some of its most productive farmland and industrial areas.

Envoys from over a dozen European countries traveled to Izyum in Ukraine’s Kharkiv region on Friday, visiting a mass burial site from which hundres of bodies have been exhumed since the area was recaptured from Russian troops this month.

Russian forces fired missiles at infrastructure in the Black Sea port of Ochakiv port, Ukrainian southern military command said on Facebook. Moscow’s troops fired missives at Mykolaiv, and a bakery and residential buildings were shelled in Marhanets in the Dnipropetrovsk region. Kyiv’s forces reasserted control of bridges across the Dnipro in the Kherson region and destroyed reserves of Russian weapons nearby. In the city of Kherson, a concentration of Russian weapons and machinery was attacked, as well as several control posts, officials said. The Ukrainian army downed six Iranian drones Shahed and one Mohajer-6 drones, the General Staff of the Ukrainian armed forces said on Facebook.

Eight ships carrying a total of 131,300 tons of agricultural products to Africa, Asia and Europe were set to leave the ports of Odesa and Chornomorsk on Saturday, Ukraine’s Infrastructure Ministry said on Facebook. Six ships sailed early in the morning and formed a caravan, with two more were on the way.

Since the safe-transit agreement brokered by Turkey and the UN was reached between Ukraine and Russia in late July, 221 ships have left Ukraine’s ports on the Black Sea with 4.7 million tons of agriculture products, chiefly grains.

Russia’s defense ministry announced personnel changes among its generals. No explanation was given for the move, days after President Vladimir Putin called up 300,000 reservists in an escalation of the now seven-month conflict.

Colonel-General Mikhail Mizintsev was appointed Deputy Minister of Defense, responsible for the supply and logistics, the ministry said in its official Telegram channel. General Dmitry Bulgakov leaves the post for another, unspecified job, it said.

Mizintsev was sanctioned by the UK in March for what it called his “reprehensible tactics” in combat including “atrocities” against the Ukrainian people during the siege of the southern city of Mariupol — as well as shelling civilian centers in Aleppo, Syria, in 2015-16.

Ambassadors from over a dozen European countries visited Izyum in Ukraine’s Kharkiv region on Friday and saw mass grave sites uncovered found when Kyiv’s troops recaptured the area. Some 436 bodies have been exhumed, including children.

The visit also took in the site of a multi-story residential building destroyed by a Russian bomb, killing 53 people.

“The world must know the truth about the bloody crimes of the occupiers. That is why it is extremely important that today foreign diplomats were able to see with their own eyes what the Russian occupiers leave behind,” said Andriy Sybiha, deputy head of Ukraine’s Office of the President.

Ukraine’s president said he would like to renew relations with China, whose position on the Russian invasion he termed “ambiguous.”

“I would like them to help Ukraine,” Volodymyr Zelenskiy said in an interview with a French newspaper. A call with Chinese President Xi Jinping “would be difficult today.”

The comments came after Chinese Foreign Minister Wang Yi met with his Ukrainian counterpart this week during the UN General Assembly in New York.

Russian forces targeted the Pechenihy dam on the Siverskyi Donets River this week following a hit a week ago to another major dam upriver in Kryvyi Rih, the UK defence ministry said in a Twitter update.

“Ukrainian forces are advancing further downstream along both rivers. As Russian commanders become increasingly concerned about their operational setbacks, they are probably attempting to strike the sluice gates of dams, in order to flood Ukrainian military crossing points,” the UK said.

(3/3) The attacks are unlikely to have caused significant disruption to Ukrainian operations due to the distance between the damaged dams and the combat zones.