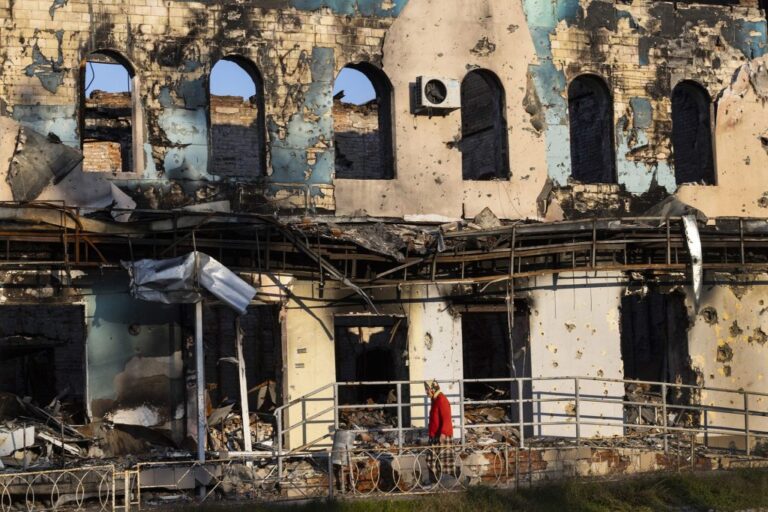 The Kremlin may rush to complete annexation of four occupied regions of Ukraine this week, days after what the United Nations has denounced as illegal votes to join Russia. President Vladimir Putin may make his annual address to parliament Friday, a state news agency reported. The so-called referendums are due to end on Tuesday. Ukraine denounced eight countries for sending observers to the ballots.

Seven months after a full-scale invasion of Ukraine that it dubbed a “special military operation,” Russia is attempting to annex some of its neighbor’s most productive farming and industrial areas. Putin ordered another 300,000 troops conscripted this week; the rollout of the partial mobilization has reportedly been chaotic, and has triggered sporadic protests.

Envoys from European countries traveled to Izyum on Friday to visit a mass burial site exhumed after Ukraine recaptured the region from Russian troops this month.

Moscow’s troops in the past day have continued rocket and aviation strikes against military and civilian targets in Ukraine, focusing on taking the entire Donetsk region and holding occupied territories. Russian forces are also shelling with tanks, mortars and barrel artillery, Ukraine’s General Staff said. On Saturday, the Ukrainian army downed six Iranian drones Shahed and one Mohajer-6 drones, the General Staff said. Responsibility for Putin’s partial mobilization “appears to be divided and complex, possibly contributing to confusion, disorganization, and violations of [Defense Minister Sergei] Shoigu’s commitments regarding exemptions,” the Institute for the Study of War said in a report.

Ukrainian President Volodymyr Zelenskiy directly addressed Russians in Saturday’s nightly video address, saying they were being sent “to their death” by Kremlin authorities.

Speaking in Russian, Zelenskiy said that any of Moscow’s troops who surrender “will be treated in a civilized manner in accordance with all conventions.”

“Russian commanders do not care about the lives of Russians — they just need to replenish the empty spaces left by the dead, wounded, those who fled or the Russian soldiers that were captured,” Zelenskiy said. “It is better not to take a conscription letter than to die in a foreign land as a war criminal.”

“We call on all nuclear powers to speak out now and make it clear to Russia that such rhetorics put the world at risk and will not be tolerated,” Dmytro Kuleba said on Twitter.

President Vladimir Putin has said he’s prepared to use “all means” to defend Russian territory, interpreted by many as a threat to resort to nuclear weapons.

Putin’s and Lavrov’s irresponsible statements on the possible use of nuclear weapons are absolutely unacceptable. Ukraine won’t give in. We call on all nuclear powers to speak out now and make it clear to Russia that such rhetorics put the world at risk and will not be tolerated.

Putin gave students at state universities a deferment from conscription, accord to a decree on the Kremlin website. The order applies to full- and part- and part-time students getting their degrees for the first time.

Vyacheslav Volodin, the speaker of the State Duma, said the lower house of parliament will react to reports of violations in the mobilization, Tass reported.

Russia may use its new partial military mobilization to shore up the Rosgvardia, or National Guard, the UK defence ministry said in an update. The guard units are currently involved in the conduct of referendums on four Russian-occupied areas of Ukraine, it said.

The force is intended for use in domestic security roles, to ensure the continuity of Putin’s regime. It was particularly ill-prepared for the intense fighting it has experienced in Ukraine.