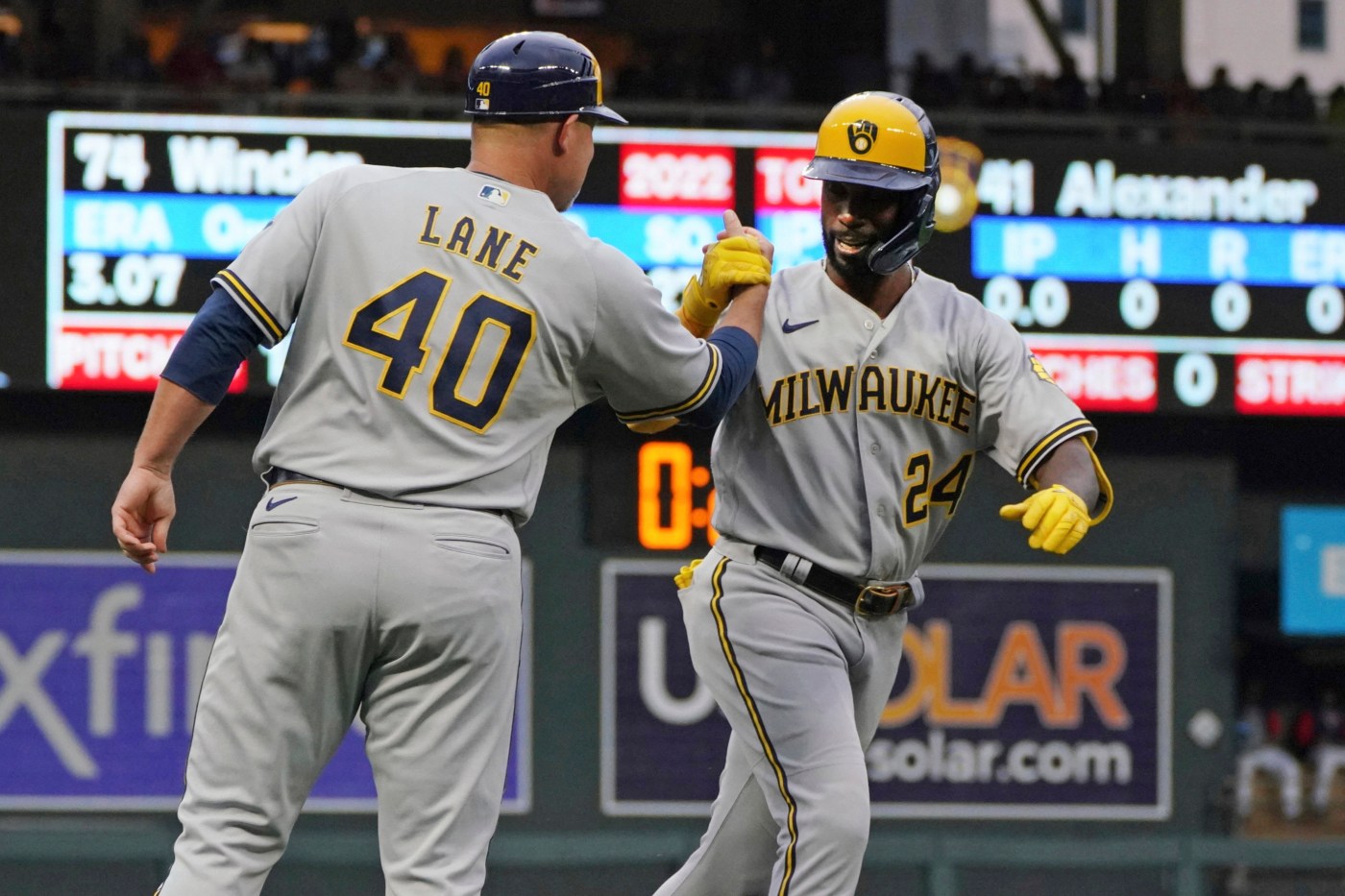 In a game between division leaders Tuesday, the Milwaukee Brewers wasted no time in jumping on the Minnesota Twins.

The National League Central leaders took a 2-0 lead on Andrew McCutchen’s two-run home run off Josh Winder in the first inning and never trailed on the way to a 6-3 victory in front of an announced crowd of 37,183 at Target Field.

The Twins got a solo home run from Jorge Polanco in the second, and the AL Central leaders tied the game 2-2 in the fourth on Nick Gordon’s two-out, RBI single. But Brewers No. 9 hitter Jonathan Davis hit a run-scoring single in the top of the fifth, and Willy Adames followed with a two-out, two-run home run for a 5-2 lead.

“They had a couple of big swings and put some runs on the board quickly with some homers, and we didn’t take advantage of the couple of opportunities we had with guys on base,” Twins manager Rocco Baldelli said.

The Twins were 2 for 5 with runners in scoring position and stranded seven runners. The Brewers left only two on base.

Trailing 6-2 in the sixth inning, the Twins loaded the bases with two out against left-hander Hoby Miller but failed to plate a run. They put runners at first and third with one out in the seventh off Brad Boxberger and scored one run on Byron Buxton’s fielder’s choice grounder to third.

“(If) we hit a double in those situations, or put a ball out of the ballpark like they did, we’re in a lot better spot,” Baldelli said.

Making his sixth major league start, Winder (4-3) was charged with all five runs on four hits — including the McCutchen and Adames homers — and a pair of walks in five innings disrupted by rain delays of 29 and 8 minutes. He struck out two.

“We kept throwing through the first (delay) because it was a little longer,” Winder said. “I had some experience with some rain delays before, so I kind of knew what my body needed to stay loose. (I) threw a couple pitches in the pen, threw some in the cage just to stay loose.

“Felt like we did a good job during the first. Then the second one was kind of weird because it was not quite as long and a little bit later in my outing, so definitely some obstacles. Nothing too crazy.”

Winder (4-3) was close to getting out of the fifth with just a 3-2 deficit after he got leadoff hitter Kolten Wong on a fly to center for the second out. But Adamse followed by taking a 2-1 pitch into the bleachers in left-center for a 5-2 lead.

“(Winder) was fine physically to go back out there and pitch,” Baldelli said. “Towards the end of the start he wasn’t as sharp and we saw that. That’s a good focus for him going forward as these starts go on, just stay locked in the way he throws the ball normally earlier in the starts the same way in the fifth inning and sixth inning.”

After the Twins went down in order in their half of the fifth, a strong thunderstorm moved in to delay the game for a third time, this time for 1 hour, 6 minutes before the game resumed at 9:55 p.m.

Jandel Gustave (2-0) pitched a scoreless fifth for the victory. Josh Hader struck out the side in the ninth to earn his major league-leading 27th save and end the Brewers’ two-game skid.

When the game resumed a third time, right-hander Trevor Megill took the mound for Minnesota and gave up a swinging bunt to leadoff hitter McCutchen. After moving to second on an errant pickoff throw by Megill, he scored on a two-out single off the right field wall by Jace Peterson to increase Milwaukee’s lead to 6-2.

Major league batting leader Arraez went 1 for 4 with a walk and is hitting .347.

Jovani Moran and Emilio Pagan combined to throw 2⅓ innings of scoreless relief for the Twins. Moran was hit in the calf by a comebacker but remained in the game. He has a contusion on the calf and will be re-examined on Wednesday.

Max Kepler left the game after fouling a ball off his right leg and was replaced in right field by Garlick. Kepler had what Baldelli called “a quick imaging” that revealed no fractures and has a knee contusion that will be examined again on Wednesday.