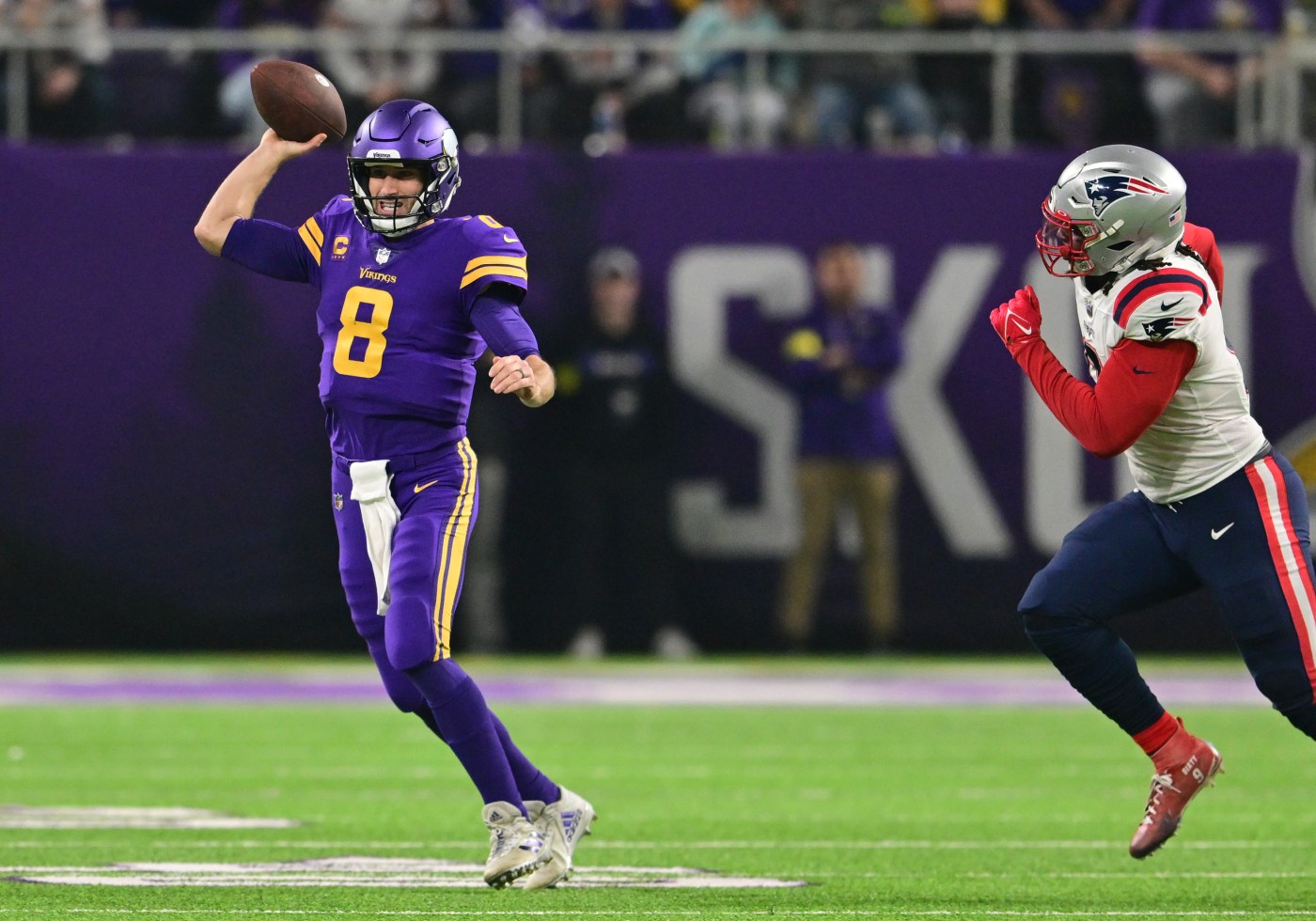 The Vikings vowed to bounce back after an humiliating loss, and that’s just what they did.

In the first NFL game ever on Thanksgiving in Minnesota, the Vikings defeated the New England Patriots 33-26 on Thursday night at U.S. Bank Stadium.

The win came four days after an ugly 40-3 loss to the Cowboys, Minnesota’s worst home loss in 59 years. Wide receiver Adam Thielen said how the Vikings looked against the Patriots would be a test of the team’s “character.”

The Vikings continued to have issues on defense, but they got big plays on offense and on special teams to raise their record to 9-2, the second-best in the NFL.

Vikings wide receiver Justin Jefferson had nine catches for 139 yards and a touchdown and broke Minnesota hall of famer Randy Moss’ NFL record for most yards receiving in a player’s first three seasons with 4,248. Jefferson entered the game with 4,109 yards and broke Moss’ mark of 4,163 in the second quarter with a 37-yard grab.

In the third quarter, Vikings running back Kene Nwangwu returning a kickoff 97 yards for a touchdown, his third return for a TD in his two-year career. Last season, he had returns for touchdowns of 98 yards at Baltimore and 99 at San Francisco.

Nwangwu’s return tied the score 23-23 after the Patriots had taken a 23-16 lead, their biggest of the game.

The Patriots led 26-23 entering the fourth quarter, but the Vikings got a 36-yard field goal by Greg Joseph early in the quarter to tie the score 26-26. Then Kirk Cousins threw a 15-yard touchdown pass to Adam Thielen with 9:34 left in the game to give Minnesota the lead for good at 33-26.

The drive for Thielen’s touchdown was kept alive by a running-into-the kicker call by the Patriots on punter Ryan Wright when the Vikings faced fourth-and-three at the Minnesota 36 with 11:04 left in the game.

The Patriots (6-5) were much more undisciplined than normal under legendary coach Bill Belichick. They had six penalties for 55 yards including an ugly unnecessary roughness penalty late in the third quarter when New England defensive back Myles Bryant gave Thielen a cheap shot.

Belichick was going against first-year Vikings coach Kevin O’Connell for the first time. O’Connell was a New England backup quarterback under Belichick in 2008.

Cousins completed 30 of 37 passes for 299 yards and three touchdowns.

New England quarterback Mac Jones completed 26 of 37  passes for 342 yards and two touchdowns. The Patriots were potent on offense after entering the game ranked just 25th in the NFL in total offense.

Jones looked to have a third touchdown pass when he hit tight end Hunter Henry at the goal line midway through the third quarter from seven yards out. But after a touchdown was called, a replay determined that the ball had hit the ground and the pass was incomplete. Nick Folk then hit a 25-yard field goal to put the Patriots up 26-23.

The Vikings then bounced back to tie the score 26-26 on Joseph’s 36-yard field goal. And Cousins then hit Thielen for the go-ahead score.

The back-and-forth nature of the game continued after that. A 34-yard field goal by Folk late in the first quarter gave the Patriots a 10-7 lead, but the Vikings tied it 10-10 on a 30-yard boot by Joseph midway through the second quarter.

Teams continued to pile up points in the third quarter. The Patriots took a 23-16 lead on Jones’ 37-yard touchdown pass to Hunter Hunter before Nwangwu tied the score 23-23 on his 97-yard return. Folk then put the Patriots back up 26-23 on a 25-yard field goal.