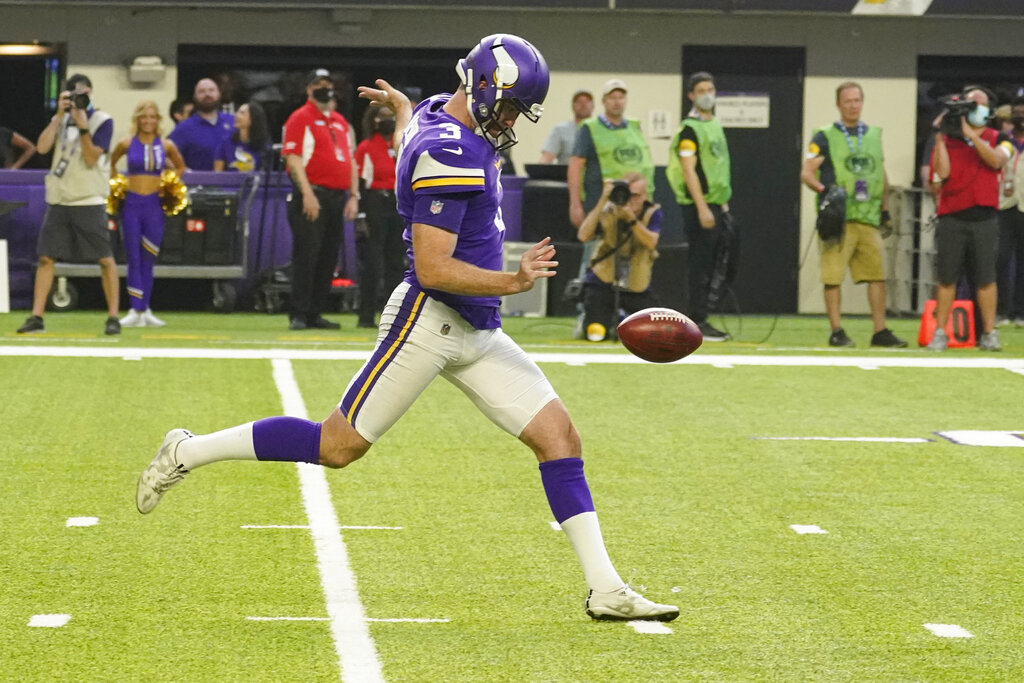 Who says the last game of the preseason won’t be exciting? On Saturday night in Denver, there will be a “punt off.”

Veteran Jordan Berry and rookie Ryan Wright will get their final chances to show their stuff in a game against the Broncos. The Vikings then must decide by next Tuesday, when the 53-man roster is set, which punter to keep.

In Minnesota’s first two exhibition games, the two have had similar statistics. Both have had five punts for a gross average of 48.6 yards. Berry has had a better net average, 39.8 to 37.0.

“You could say that it is a punt off,’’ special-team coordinator Matt Daniels said Tuesday. “It’s almost like they’re carbon copies. It’s weird. One guy (has) an amazing punt, and the next guy doesn’t feel that pressure and follows it up with another big punt. … Both guys have been doing a great job.”

Daniels said the Vikings will go over the many punting statistics they have been compiling before making a final decision. Daniels said holding also will play a key role in the process, and that kicker Greg Joseph will be consulted.

Joseph, who otherwise has had a very good training camp, did miss two kicks in a recent practice with Wright holding. But one advantage in keeping Wright, 22, could be that he has a lower salary-cap number of $706,666 to $895,000 for Berry, 31, and that he could have the potential to be a more long-term option.

“I think we’re punting very well,’’ said Wright, an undrafted free agent from Tulane. “Jordan’s been a good mentor to me in learning the game in the NFL, and we have a really good relationship. I think it’s going to be unfortunate to let one of us go.”

Berry is entering his eighth NFL season. He joined the Vikings last season after six years with Pittsburgh and averaged 46.5 gross and 41.9 net yards per kick.

“It’s going pretty good,’’ Berry said. “Obviously, I feel like I’m punting really well, and Ryan’s doing a really good job for a guy in his first year in the league. It’s been pretty competitive.”

After two seasons in Minnesota, cornerback Harrison Hand is moving on.

Connelly and Proehl both are working their way back from torn anterior cruciate ligament injuries and were placed on the physically unable to perform list at the start of camp. Both now must miss at least the first four regular-season games.

LEARNING AS HE GOES

Smith-Marsette, a second-year wide receiver, didn’t return any punts at Iowa, although he brought back kickoffs. As a rookie, he had two punt returns in the preseason and none in the regular season.

Now, Smith-Marsette is Minnesota’s primary punt returner. But In the Vikings’ first preseason game, he muffed a punt, and in their second, he lost a fumble after a nine-yard return.

“We can’t lose the ball right there,” Daniels said. “It just can’t happen.”

“He has all of the tools in his body of what you’re looking for in a punt returner,” Daniels said. “He’s elusive. he can stick his foot in the ground, he can make you miss. … Obviously, with more reps becomes more confidence and becomes better decision making. … He just needs more time on the job, and quite frankly the time is narrowing down.”

Eric Thomas, a popular motivational speaker, was brought in to talk to Vikings players before Tuesday’s practice. The reviews were good.

“He’s one of the best motivational speakers in the world, so that was good for us,’’ said wide receiver K.J. Osborn. He talked about a bunch of stuff. He talked to us about finishing, about giving 120 percent. He speaks to football teams, Fortune 500 companies. He was really good.”