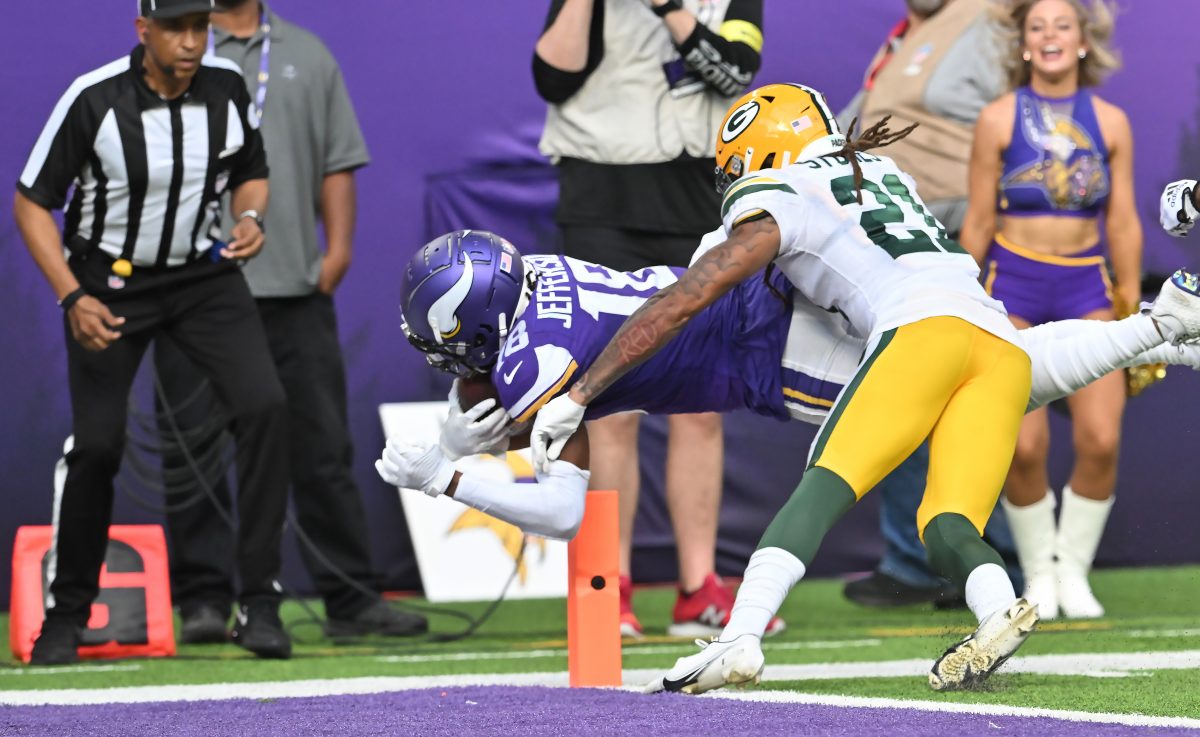 Kirk Cousins took a seat on the sideline next to Justin Jefferson during the Vikings’ season opener Sunday at U.S. Bank Stadium. He patted his star receiver on the back a few times and provided some words of affirmation as the sellout crowd of 66,959 erupted around them.

Asked about the particular exchange after the Vikings’ 23-7 victory over their biggest rivals, the Green Bay Packers, Cousins told reporters he was praising Jefferson for turning a long gain into a touchdown.

Though many were stunned by the way Jefferson found the end zone shortly before halftime — virtually uncovered on his route over the middle of the field, he broke free after catching the ball, then dove for the pylon to secure the score — Cousins has grown to expect that from his young teammate.

“There is a specific trait that I think is special,” Cousins said. “The ability to finish plays.”

This has been on display ever since the Vikings selected Jefferson out of LSU in the first round of the 2020 NFL Draft. He burst onto the scene in Week 3 of his rookie season, torching the Tennessee Titans for 175 receiving yards and a touchdown. His lone scoring play that game encapsulated exactly what Cousins is talking about.

After hauling in a deep pass near the 40-yard line, Jefferson shook off a tackle from cornerback Johnathan Joseph, then made safety Kenny Vaccaro miss on the sideline. With nobody else in front of him, Jefferson hit “The Griddy” on his way into the end zone.

There are a lot of players who wouldn’t have scored in that situation. They would have gone out of bounds or been taken down in the open field.

And if that happens, “then we’re running out our red-zone plays and hoping and praying we get in,” Cousins said. “To finish it there and not leave it up for debate is big time.”

It was a similar story in Sunday’s game as Jefferson caught a pass from Cousins near the Packers’ 20-yard line, raced past safety Adrian Amos, who appeared to be caught flatfooted, then broke the plane a fraction of a second before cornerback Eric Stokes arrived to lay a hit.

It was a perfect example of Jefferson finishing a play. Just like Cousins talked about.

“On that play, a lot of guys go out at the 3-yard line, or get to the 1-yard line,” Cousins said. “The fact that he got in and got us six (points) so we don’t have to mess around with bringing out the goal-line offense, that’s elite, and it makes a difference for our team.”

That prowess for delivering the knockout blow is something fellow receiver Adam Thielen realized about Jefferson before they ever played in an actual game together. It was plain to see simply by the way Jefferson carried himself on the practice field at TCO Performance Center in Eagan.

“He’s always that ability to make guys miss and finish those plays with a lot more yards than the normal receiver would,” Thielen said. “You could tell he had the movement skills and the body control to do those things — and do them at a high level.”

As for first-year Vikings coach Kevin O’Connell, he noted that Jefferson’s dominance goes beyond his willpower to gain extra yards.

“When that ball goes up, he feels like it’s his,” O’Connell said. “We are incredibly fortunate to have a guy like Justin.”

Those ball skills were on display as the Vikings put the finishing touches on their win over Packers. With the offense struggling after halftime, Jefferson climbed the ladder and caught pass from Cousins at its highest point. That kept a drive alive and milked some additional time off the clock, Greg Joseph later nailed a field goal to put the game on ice.

“I live for these types of big games,” Jefferson said in the Vikings locker room after the game. “I was definitely excited to get out there. I’m glad I had this kind of start. I’ve just got to keep getting better and keep finding ways to get open.”