Which WR will break out? Will Lucas Patrick be ready for Week 1? 5 questions about Chicago Bears veteran newcomers. – Twin Cities 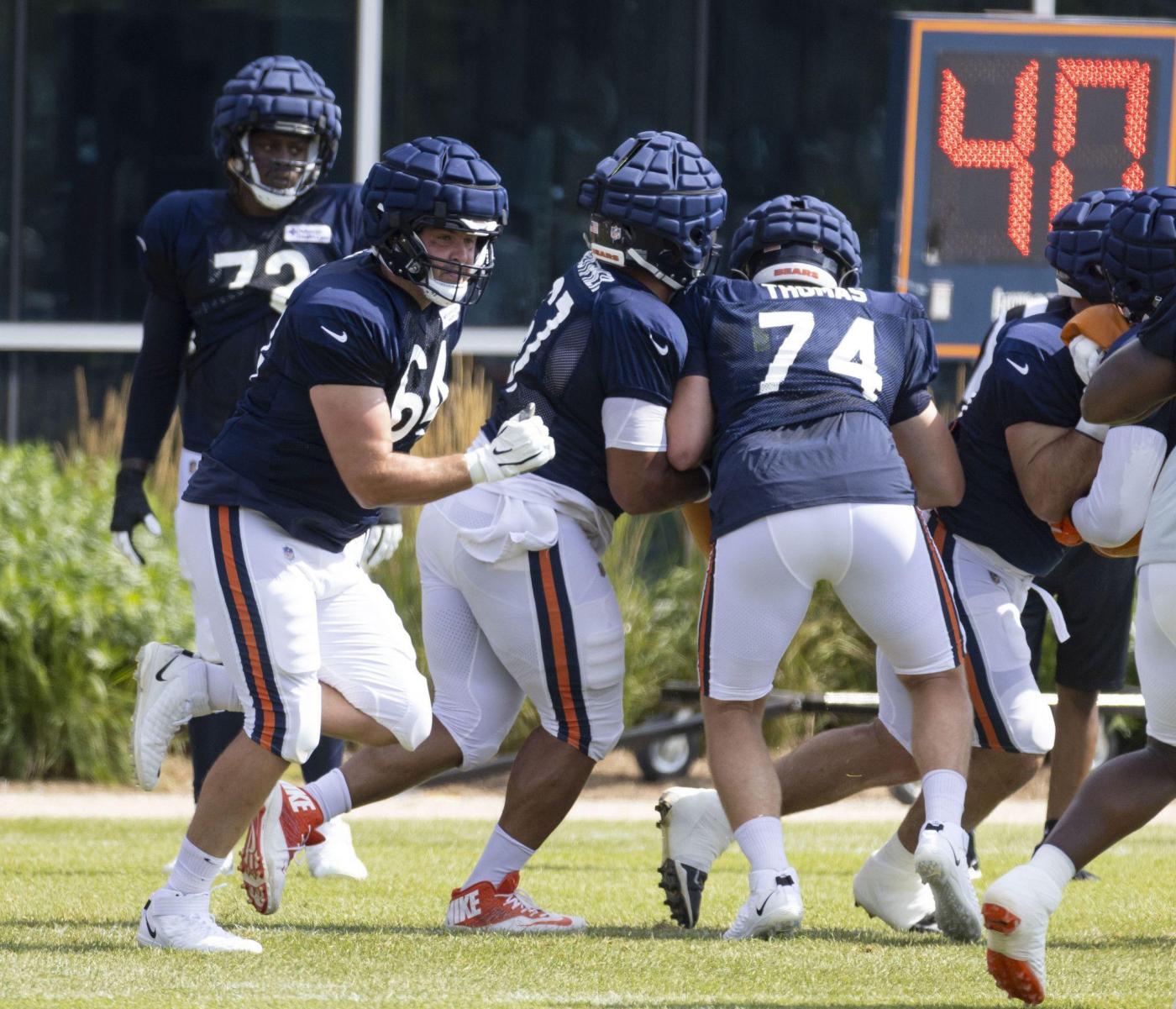 Chicago Bears general manager Ryan Poles didn’t make many splashy signings in the free-agent market this offseason, but he still brought in several players who will be asked to fill key roles.

Here’s a look at five questions about Bears veteran newcomers this season.

1. Will Byron Pringle, N’Keal Harry or Equanimeous St. Brown make the most of their fresh starts?

Beyond third-year player Darnell Mooney, the Bears wide receivers room is made up of several players looking for breakout seasons. It was a theme of Poles’ offseason roster additions — guys who are hungry to show what they can do after either crowded rosters or injuries slowed their production earlier in their careers.

“I’ve got a real chip on my shoulder,” said Harry, a former first-round pick whom the Bears acquired from the New England Patriots for a 2024 seventh-round pick. “I’m looking to come in and do anything I can to help this team win. I feel like I fit very well in the offense, so I’m ready to go.”

After four years in Green Bay, St. Brown has a leg up on the competition because he is familiar with coordinator Luke Getsy’s offense. St. Brown had 21 catches for 328 yards in his rookie year but was injured in 2019 and hasn’t topped 117 receiving yards since.

Pringle is the most accomplished, with 42 catches for 568 yards and five touchdowns in 2021 amid a lot of talent with the Kansas City Chiefs. But Poles feels Pringle is capable of more in his fourth season on the field.

Pringle said he’s not thinking about the competition, which includes a host of other receivers looking to turn heads.

2. Will center Lucas Patrick be ready for a return by Week 1?

Patrick was supposed to be the offensive line’s tone-setter.

After Poles signed Patrick to a two-year, $8 million deal in the spring, Patrick screamed into the phone. Pole said the reaction was an example of Patrick’s fire and called him a “prick” — in the best way possible considering Poles is trying to build an attitude on the line.

But Patrick broke his right hand just two days into training camp practices, and the Bears were left to rotate Sam Mustipher and rookie Doug Kramer at center. The hope is Patrick will be ready to return by Week 1, but it’s far from an ideal situation considering the only other position set on the line is left guard Cody Whitehair.

“How do you respond to it?” coach Matt Eberflus said after Patrick’s injury. “A lot of things you can’t change in life, right? You get into situations and there they are. They present themselves, and how do you respond to that situation is all that matters. You can’t take a magic pill. You can’t just invent another player that’s going to show up sometimes. You just have what you have and you have to work through it and make it the best you can.”

The Bears at least are getting a better look at Kramer, a sixth-round pick, and have a fallback in Mustipher, who was competing at right guard before Patrick’s injury. Mustipher has started 24 games at center over the last two seasons and said he didn’t mind the competition Patrick’s offseason arrival created.

“I’ve loved competition my entire life, every stage that I’ve been in that I’ve had to compete for a job,” Mustipher said. “I’ve never been the strongest, fastest, most athletically gifted guy, so I just hang my hat on being willing to do the other things that other people aren’t willing to do.

3. Can Nicholas Morrow be the leader in the middle for the Bears?

Count Morrow among the many newcomers with something to prove.

He put together the best season of his career in 2020 with the Las Vegas Raiders — 78 tackles, eight for a loss, six quarterback hits, three sacks and nine passes defended — but then was sidelined for all of 2021 with a high ankle sprain that needed tightrope surgery.

Now after signing him to a one-year, $3 million deal, the Bears are counting on Morrow to be their force at middle linebacker next to weak-side linebacker Roquan Smith, who remains out of practices as he waits for a new contract. Morrow has been charged with calling plays and said it has been “pretty smooth.”

“That’s a pretty standard thing,” he said. “The biggest thing is making sure we’re all on the same page and we’re overcommunicating. Sometimes you get those young guys in there and there’s certain calls where it’s got to be communicated consistently. Just getting that together is probably bigger than the calls.”

Morrow comes with a reputation as a speedy and smart hard-worker who prefers to lead by action.

“The most effective way to lead is to lead by example, right?” Morrow said. “When guys see it on tape, they have a vision. … Pregame speeches don’t win games. That’s just the reality of it. But effort is contagious and so when guys see that effort, they can follow that.”

4. Can Al-Quadin Muhammad and Justin Jones make an impact on the defensive line?

The Bears shed a lot of talent from their defensive front in the offseason, trading Khalil Mack, letting Akiem Hicks and Bilal Nichols move on in free agency and seeing Eddie Goldman retire.

So the additions of Muhammad and Jones were key to filling some big holes.

Muhammad played four of his five seasons in Indianapolis under Eberflus, setting career highs with 48 tackles, six sacks and 13 quarterback hits in 2021. Eberflus said Muhammad has made a career of going hard every play — “He doesn’t take plays off,” the coach said — and Jones said the defensive end is a natural fit.

“He’s fast. He’s quick. He has good hands. He has good hips,” Jones said. “He has been in the scheme before, so he knows his way around. But he just looks like he is supposed to be there, if that makes sense. He looks like he fits in really well. And he understands the scheme itself, so he knows when he can take his shots and where he can’t. He communicates that with other D-ends and obviously with me in the room as well, which makes me a better player, smart(er) player as well.”

Meanwhile, Jones, who is in his fifth NFL season after four with the Los Angeles Chargers, said he feels as if he was “born to play” three-technique in Eberflus’ defense. He had three sacks and five quarterback hits in 2021.

“I’m an explosive athlete,” he said. “I get off the ball. I knock guys back. I disrupt plays. I can rush. All the guys know that, and this gives me the opportunity to be the beast that I know I am.”

Just before training camp opened with multiple questions about who would be protecting quarterback Justin Fields this season, Poles made two veteran offensive line additions in Reiff and Schofield.

Reiff, 33, has started 139 games over 10 seasons with the Detroit Lions, Minnesota Vikings and Cincinnati Bengals, and has taken reps at left and right tackle as the Bears try to sort out their best five.

Reiff’s lone season with the Bengals ended with an ankle injury in December, and he’s eager to return for another year.

“Probably the end of May was a point that I said, ‘Yeah, I want to play,’” Reiff said. “I ended the year on IR, and I don’t want to go out like that.”

Schofield, an Orland Park native who has started 81 games over seven seasons, provides competition at right guard for Mustipher and rookie Ja’Tyre Carter.

“Any time we can get competition in here, that’s a good thing, especially guys that have a lot of experience like those guys do,” Whitehair said. “It’s only going to continue to make our room better and help us grow as an offensive line.”