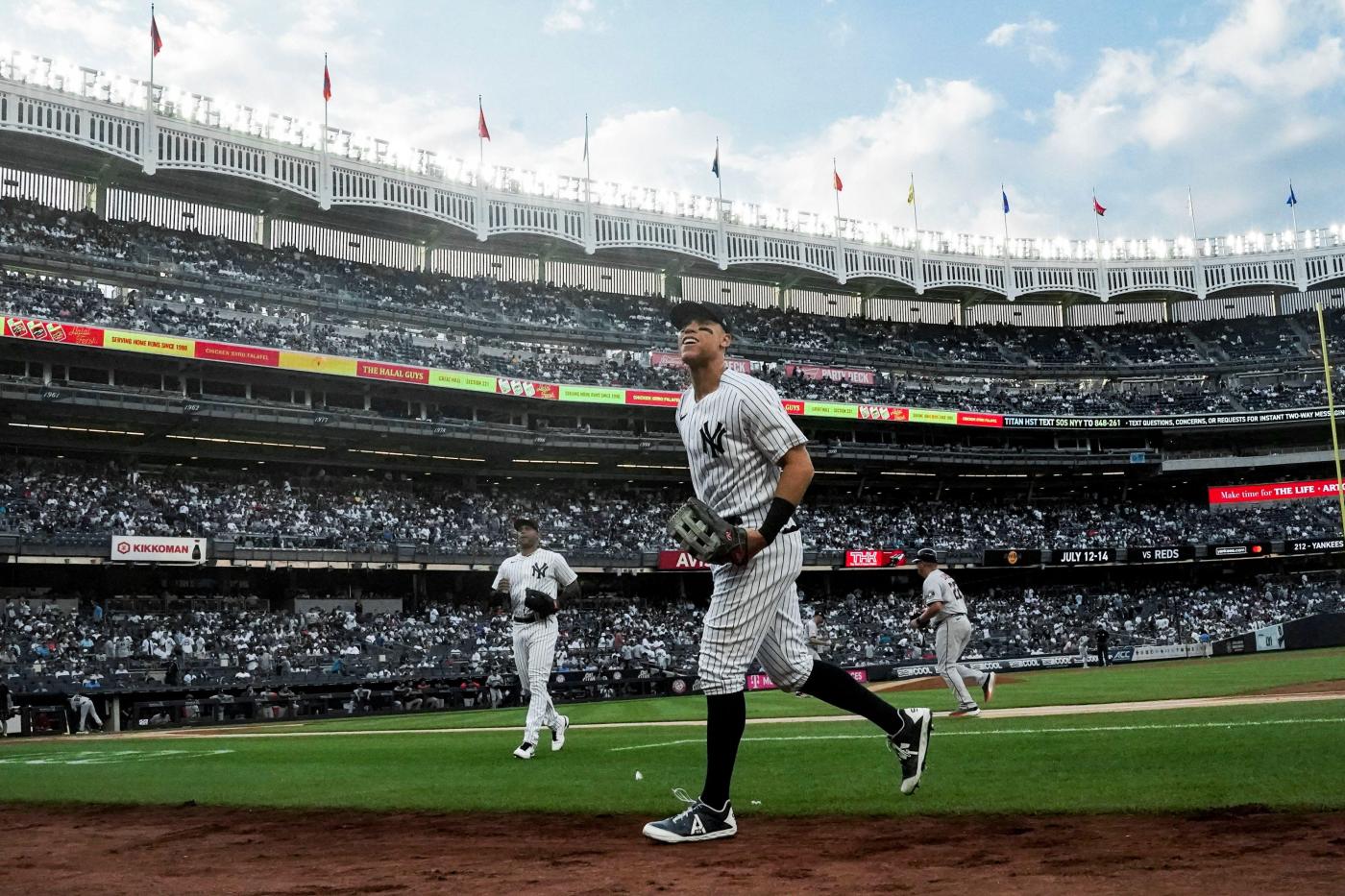 So after a quite productive week in which he hit two homers in a game to beat the Blue Jays and a day later drove in the game-winning walk-off run in the series opener against the hated Astros, Aaron Judge’s ongoing contract drama with the Yankees has cleared the first hurdle with an (apparently) amicable arbitration settlement at the midway point of $19 million.

The way this thing has played out so far — with Judge betting on himself after rejecting the Yankees’ seven-year, $213.5 million extension offer back in April and now embarking on his best season ever as he heads into free agency — I am reminded of something Joe DiMaggio said years ago when somebody asked him what he thought he’d be worth in today’s baseball market. “All I can say,” the Clipper responded, “is that I’d probably have to sit down with (’50s Yankee owner) Mr. (Dan) Topping and suggest to him, ‘let’s be partners.’”

I wouldn’t say that will be Judge’s proposal to Hal Steinbrenner when they begin free-agent talks this fall, but if he continues on with this monster season of his — in which he’s presently leading the majors in homers, runs and total bases and hitting .300 where’s he’s never been before — he’ll be in line for a sizeable chunk of the Yankee owner’s money above the $213.5M he turned down. Right now, he also has to be considered the front runner (even over Shohei Ohtani) for the AL MVP award which would net him an additional $250,000 per the arbitration settlement. But just how much above the $213.5M is the question.

Throughout his contract negotiations with the Yankees last winter Judge made it clear he wanted to be paid commensurate to Mike Trout and the record 12-year, $430 million deal the Angels star signed in 2019, and already the usual media “agents” are touting Judge as the next $300 million man in baseball. But for that to happen, the Yankees would have to tack on at least two more years to their offer, bringing the 30-year-old Judge to age 39 at the end of his contract. When Trout signed his deal he was only 27, meaning the Angels could reasonably expect getting their money’s worth at least for the first 9-10 years of the contract, to his mid-’30s (although he already missed almost all of last season with a calf injury).

As it was, the offer from Steinbrenner which Judge rejected would have given him an AAV of $30.5M, second only in baseball to Trout’s $35.5M. I don’t think, at this point, Steinbrenner would have any problem paying Judge, the face of his franchise, $36M a year. It’s just for how many years? He could do it simply by upping his seven-year original offer by $52 million. Then it would be up to Judge to decide if he had to have over $300 million for 9-10 years. And, if so, would there be another owner out there willing to go that high for a 30-year-old player who missed large chunks of three of his first four seasons due to injuries?

Again, the media “agents” are saying absolutely. After all, isn’t there always the One Dumb Owner? But who? The Mets? No way is Steve Cohen going to try and poach the Yankees’ franchise player, especially with Jacob deGrom to deal with. The Dodgers? They already have the second-highest payroll in baseball (although they’ll be shedding David Price and Trevor Bauer next year), but they’re pretty much set in the outfield and they’re going to have to shell out a ton of money to retain shortstop Trea Turner, and also have other more pressing needs like a closer. Red Sox? In case you haven’t noticed, Red Sox owner John Henry is now heavy into analytics and payroll downsizing, which is why he lowballed Xander Bogaerts this winter and was reportedly far away from what Rafael Devers wants to stay out of free agency after next year.

Word is the Cubs are preparing to start spending next year, but does Judge, who yearns to win, really want to spend the rest of his career at Wrigley Field where there’s been one World Series in the last 77 years? If Judge, a northern California native, were to leave the Yankees perhaps the one team that would make sense for him is the Giants. But they are an aging team, in decline and an organization steeped in analytics where one of the principal tenets is no long-term contracts for players over 30.

Maybe there really will be One Dumb Owner out there this winter, willing to invest 9-10 years and $300 million on Judge. But revenues — local TV contracts, national TV money and attendance — are down all over baseball. Judge also has to know no team in baseball can come close to matching the residual marketing/commercial benefits of being the face (and presumably) the captain of the Yankees in New York. If he doesn’t, he should just ask Robinson Cano.

There’s a bit of excitement in Pittsburgh these days about the Pirates, who for one thing very likely won’t be finishing last this year for the first time in four seasons thanks to the dreadful Cubs and Reds. For another, they were able to sign their premier young star and first round pick in 2015, third baseman Ke’Bryan Hayes, to an eight-year, $70 million extension this spring, and just recently promoted their top prospect, shortstop Oneil Cruz, who had seven RBI in his first five games to compliment him on the left side of the infield, hopefully for years to come. And last year’s No. 1 pick, catcher Henry Davis has hit himself already up to Double-A and will seemingly be ready for delivery next year.

But if things are finally looking up for the Pirates, we can’t help but wonder how they’d look now but for a series of bad trades that sent Gerrit Cole. Clay Holmes, Joe Musgrove (the only player of value they got back in their 2018 Cole deal with Houston) Jameson Taillon, Austin Meadows, Shane Baz packing from Pittsburgh. All of those trades were money related and so far the most the Pirates have to show for them in terms of productive and/or promising players are closer David Bednar (the primary return from the Padres for Musgrove, who’s won 19 games in the last year-and-a-half in San Diego and is 8-1 with a 2.12 ERA this year), and rookie right-handed starter Roansy Contreras (2.89 ERA for his first six starts), acquired from the Yankees in the Taillon deal in January 2021.

They also traded away Starling Marte two years ago, although the shortstop prospect they got back, Liover Peguero, looks to be on the fast track to the majors. Obviously, however, the Pirates totally misread Holmes’ abilities who they traded to the Yankees for a couple of light hitting infielders last July. And the July 2018 trade in which they sent Meadows and pitchers Tyler Glasnow and Baz to the Rays for chronically injured Chris Archer will go down as one of the worst deals in history. It also got previous GM Neal Huntington fired, even though Glasnow, who became the Rays’ ace, is currently down with a torn elbow nerve and Meadows was subsequently traded to Detroit after hitting 65 homers in Tampa Bay from 2019-21. It will be interesting to see what GM Ben Cherington does at this year’s trade deadline where Bednar and center fielder Bryan Reynolds will especially be in demand. It’s understandable, however, if Pirates fans are saying “enough of the trades.” …

It seems every day there’s another horrendous umpire performance behind home plate and we have to believe the automated strike zone is coming as soon as next year. Last Tuesday in the game between the Blue Jays and White Sox it was Doug Eddings, consistently one of the lowest rated umpires (they just go on and never get fired or demoted), who missed 29 calls behind the plate. So angered at Eddings’ incompetence, the Blue Jays sent hitting coach Guillermo Martinez out with the lineup card the next day, as the sacrificial lamb to give him an earful at home plate and subsequently get himself ejected before the first pitch. It was all very quick and efficient, albeit not without some apparent physical contact, and got me to thinking of more creative ways of being ejected — Lou Piniella yanking up the bases, Earl Weaver turning around his cap and stalking the umpires all over the infield — has become lost art in baseball. Going way back in baseball time, one of the most colorful ejections was by former Pirates manager Bobby Bragan who in 1957 came out to argue with home plate umpire Stan Landes and proclaimed: “I want to discuss your performance but I’m thirsty.” He then abruptly turned around, went back to the dugout and re-emerged with a glass of orange juice with two straws in it. Even more outlandish was what Ray Murray, a catcher for the Indians in the late ‘40s, did after becoming exasperated by the home plate umpire’s pitch calling one day. Turning around, Murray called time, removed his catching gear, kneeled down at home plate and began praying before handing the home plate umpire the business card of a local eye doctor.