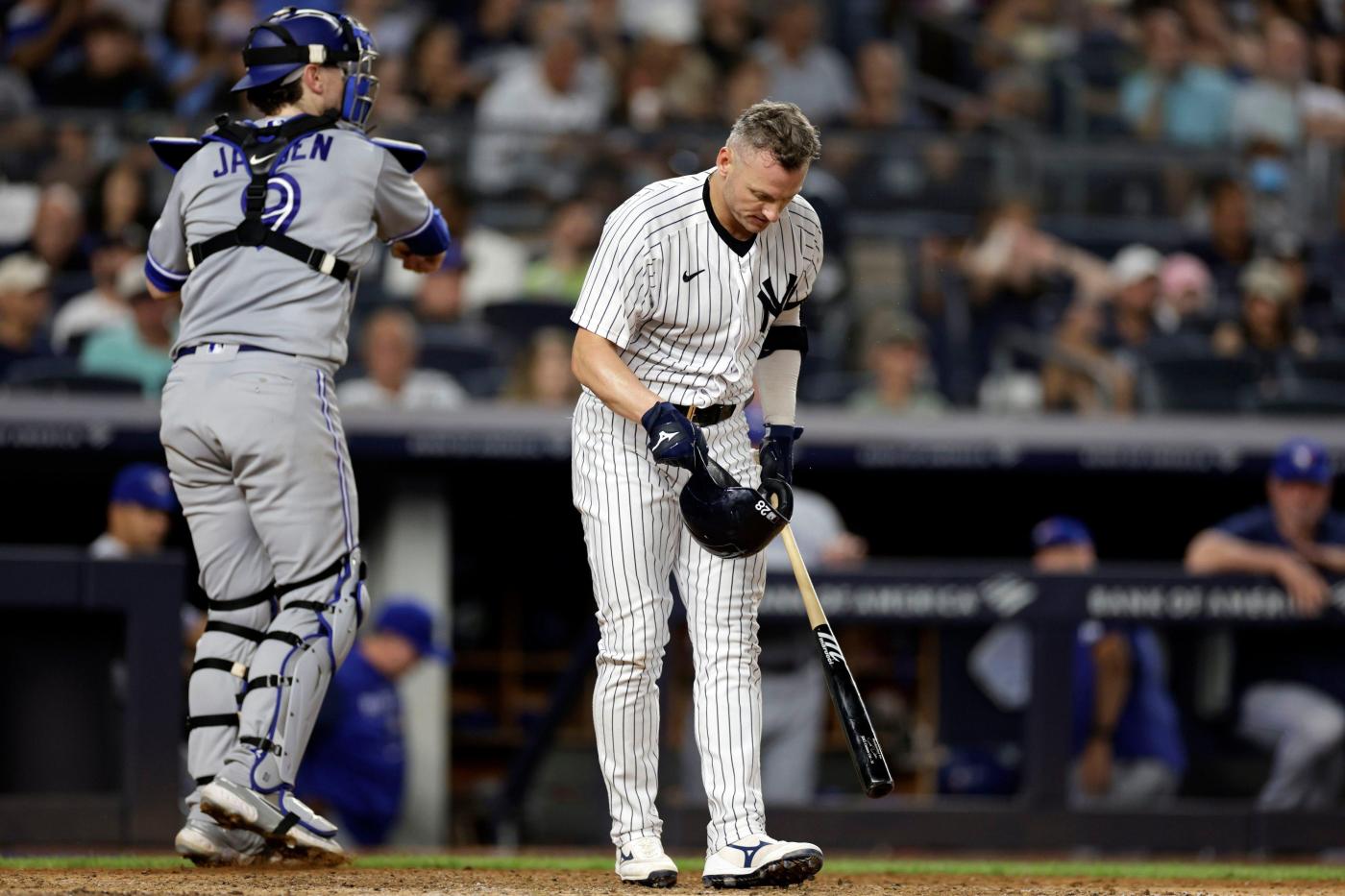 This isn’t about Giancarlo Stanton’s injury or Matt Carpenter’s, even though those both hurt the Yankees plenty. This isn’t just the injury to Michael King, even though losing King — it’s what the Yankees do, by the way, they send one reliever after another to the IL — hurt the bullpen a lot. This isn’t about Luis Severino, as much as the Yankees continue to look at him as some kind of Max Scherzer in waiting, when they’re once again waiting for him to get healthy. Everybody has injuries. Ask the Mets about that.

The Yankees right now aren’t doing anything well enough to win their first World Series since 2009. That includes pitching. But then it has been years since the Yankees had enough pitching to win it all.

When they were getting out to that blazing 44-16 start, the team’s earned run average was 2.85. Their pitchers allowed 180 runs. Over their next 60 games — games in which their record was 29-31 — the team’s earned run average was up to nearly four runs a game. And their pitchers have allowed 62 more runs over the last 60 than the first 60, for a total of 242.

Starting this week, against the Mets, the start of the 40-game season the Yankees have left, we are going to find out which Yankee team is real: The one that broke out of the gate the way it did and had people certain it was on its way to the Canyon of Heroes. Or the one that has been two games under .500 since.

It’s a good thing Josh Donaldson hit that slam on Wednesday night, because after it started to feel as if the Yankees had clinched the AL East in June, their lead over the Rays coming into the weekend would have been six in the loss column over Tampa Bay. Even with Wednesday’s comeback win over the Rays, the Yankee lead was seven over the Jays in the loss column after Friday night.

Stanton was hitting .228 before he got hurt. Gleyber Torres was at .247 through Friday. Donaldson was at .223 and Aaron Hicks, longtime darling of the front office, was .217. Andrew Benintendi was .188 as a Yankee through Friday. He strikes out once a game, after striking out 52 times in 93 games as a Royal. Anthony Rizzo, as hot as the team in the early going, is now down to .223. Sometimes it seems that when Aaron Judge doesn’t hit, nobody does.

The Yankees need to pick it up, and now. Because if the team that played over .700 ball in the early part of the season, the team that excited its fan base the way the ‘17 Yankees did at the end, is a bust-out again in October, this will be the most disappointing ending for the Yankees since October of 2004.

Of all the teams that have started out with 44 wins through their first 60 games since 2004, the Yankees now have the worst record over the next 60. Not one of the worst. The worst. No other team has ever been under .500 for the next 60 after a start like that. It means this turnaround, for now, is as stunning as there has been in baseball history. The next closest teams to what they’ve done since 44-16 are the 1955 Brooklyn Dodgers and the ‘84 Detroit Tigers. They both went 33-27 over their next 60.

But here is the good news in Yankeeland:

Both of those teams, ‘55 Dodgers and ‘84 Tigers, went on to win the World Series.

People sometimes get the idea that the Yankees don’t win when they stop hitting home runs. That is simply not the case this season, according to my man John Labombarda of the Elias Sports Bureau (they know everything). Over the first 60 games of this season, Judge and friends hit 98 homers. Through games of Wednesday night, when Donaldson walked things off against the Rays, they had hit 97 in their next 59.

The pitching isn’t terrible. Just ordinary. You know the litany of near-misses in that department. Once they had the same chance at Justin Verlander that the Astros did. But the Astros did get Verlander. If they hadn’t done that at the trade deadline in 2017, if it had been the Yankees instead, the Yankees would have gone to the Series that year. When the Yankees did get a pitcher out of Houston, it was Gerrit Cole. He isn’t Verlander and never will be.

This year the pitching prize at the deadline was Luis Castillo. The Yankees weren’t willing to pony up for him, same as they didn’t pony up for Verlander. They went for Frankie Montas. He isn’t Castillo, and might turn out to be the new Sonny Gray, a former Oakland import, instead.

Maybe Montas will do better in his second Yankee Stadium start this week, even if it’s against Mr. deGrom. Maybe he will get hot down the stretch, and not look like one more Yankee pitching acquisition who pitched a lot better out of town than he did when he showed up on 161st St.

You always go back to the old sports axiom about how you’re rarely as good as you look when you’re winning, and rarely as bad as you look when you’re losing. But one thing never changes with the Yankees: When they are going gangbusters the way they were earlier did this season, it’s World Series or bust all over again. People immediately start confusing this baseball century with the last one at the Bronx. Except that the Yankees have now played in just three World Series and won one since the Subway Series of 2000. They have now appeared in one Series in the last 19 seasons.

Now here they are, after bringing such hope and excitement to their fan base over those first three months. They actually were pitching and hitting and fielding like champs then. Not so much lately. Still a 40-game season left. Still time for them to show which Yankee team is real. The one that did have them looking like world beaters, and maybe the World Series. Or the one that hasn’t even been as good as the Orioles since the middle of May.

WATSON GETS OFF EASY, LINDOR AN ALL-ROUND AMAZIN’ MET & DURANT IS STILL MAD …

Deshaun Watson gets off too easily now, even with an 11-game suspension and a $5 million fine.

He should not have played football until next season, at the earliest.

Especially since he is still proclaiming his innocence after sanctions like that, and clearly only expressing nuanced remorse for public relations purposes.

If you don’t think he got off too easily, please read some of what Lauren Baxley, the former massage therapist who has refused to settle with Watson — one of his 26 accusers — wrote in The Daily Beast this past week:

“My name is Lauren Baxley. I am a former massage therapist, having quit the only career I have known in May of this year. I was forced into quitting for the sake of my health and life; I have not felt safe providing therapy since before June of 2020. I am the remaining plaintiff against Deshaun Watson, the Cleveland Browns quarterback who harassed and committed indecent assault against me.

“I have rejected all settlement offers, in part because they have not included any sincere acknowledgment of remorse and wrongdoings, nor have they included any promises of rehabilitative treatment. Watson still refuses to admit that he harassed and committed indecent assault against me. Any settlement offer he has made has been a dismissal of his evil actions, and I know that unless there is an authoritative intervention, he will continue his destructive behavior.

“Because Watson repeatedly assaulted women, the institutions and individuals who currently uphold and employ him must also be held accountable.”

That’s it and that’s all.

It is still astonishing that the original punishment was even softer than what Watson finally got from the league.

No kidding, I’m a lot more careful these days when I squirrel away my nuclear documents.

Is it just me, or are these big conferences in college football starting to act like the mob?

You did ask, right?

I wrote last week that there’s about as much drama on the Blood Money tour as there is as your club’s Member-Guest.

That was a rotten thing to say about your club’s Member-Guest.

The Mets have never had a more talented all-around player than Francisco Lindor.

Who probably wishes Buck Showalter had shown up a year earlier than he did.

It is as interesting watching Max Scherzer pitch when he doesn’t have his best stuff as it is when he does.

Yeah, Kevin Durant is going to retire rather than return to the Nets.

I know Durant is mad at his general manager.

But wasn’t he the one acting like the Nets general manager when he wanted Kyrie to be his wingman?

How’s he looking on that one these days?

If Rudy Giuliani ever has to make a run from the law, is there any chance somebody will want to make him South America’s Mayor?

On Sunday evening, a new moon in Libra asks you to notice how your relationships…