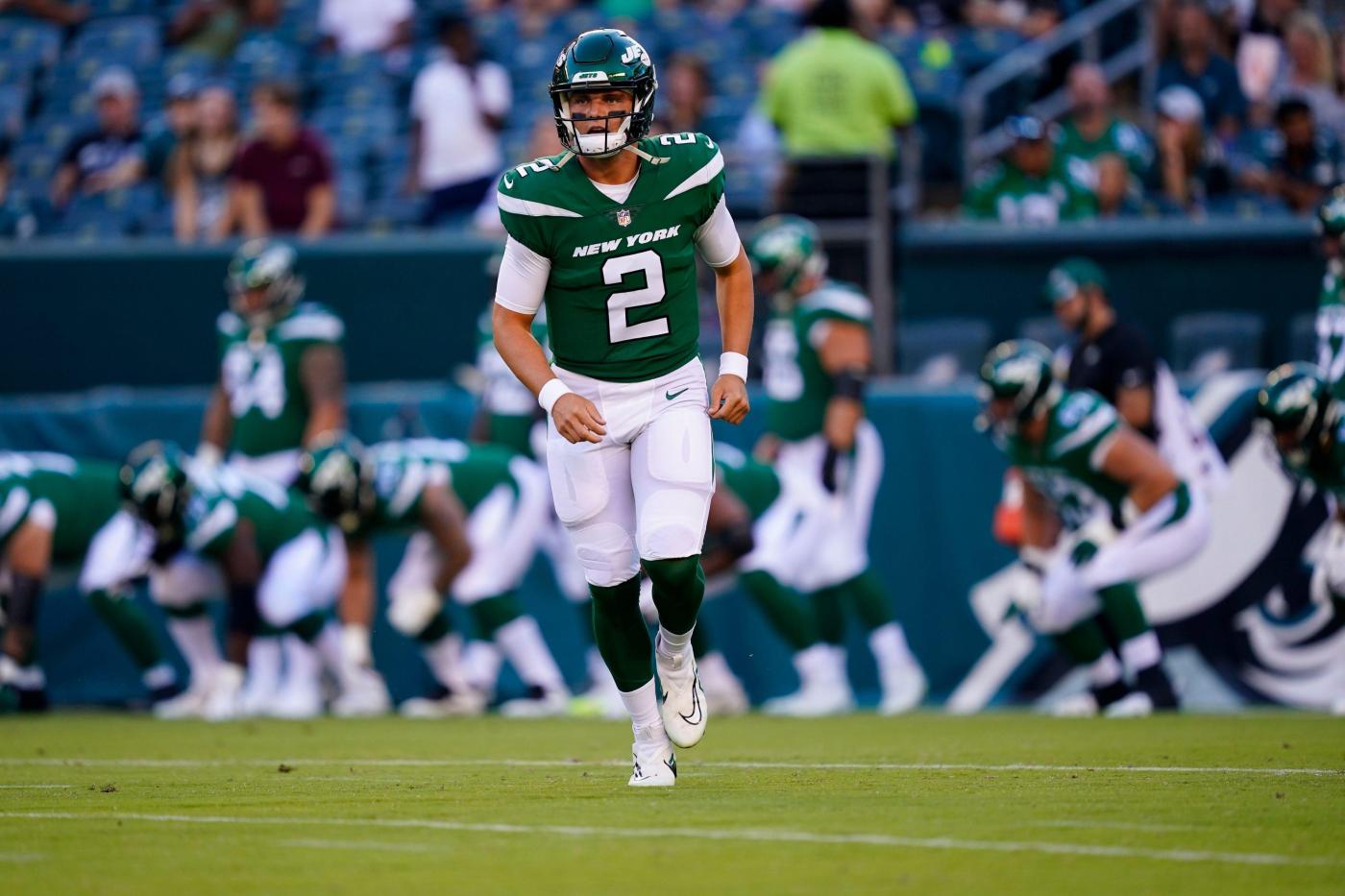 But Jets fans received some encouraging news on Monday about the former No. 2 overall pick.

Wilson worked out with the rest of the Jets team during Monday’s practice. With an off day scheduled for Tuesday, the team will assess where Wilson is before announcing Wednesday who will start against the Baltimore Ravens Sunday.

“It does nothing for us from a gameplan standpoint,” Jets coach Robert Saleh said on not announcing the starting quarterback on Monday. “All three of our quarterbacks are capable of running our offense at a high level.”

Wilson suffered a meniscus injury and a bone bruise during the first quarter of the Jets’ preseason opener against the Philadelphia Eagles last month. After fears he could possibly be out for the season, Wilson had surgery to trim the meniscus. The prognosis was about two to four weeks before Wilson would return to the field.

As he’s been trying to heal, backup quarterback Joe Flacco has been running the first-team offense during practices during the last three weeks and played in the Jets preseason finale against the Giants. Saleh said Wilson missing those practice and game snaps will not factor into his decision to start Wilson Sunday.

“You just have to rip the bandage off. When Zach is ready to play and he’s healthy and I’ve said that from the beginning, he’s going to go out there and play and play football.”

This is Wilson’s second injury to his right knee within the last 11 months. Last season, Wilson suffered a sprained PCL in Week 7 that kept him out for four games. He didn’t have surgery on the knee, but he played the remainder of the season with a brace.

Wilson is coming off an up-and-down rookie season where he completed 55.6% of his passes while throwing nine touchdowns and 11 interceptions.

During the offseason, the Jets improved their offensive line on paper by signing veterans Laken Tomlinson and Duane Brown to patrol the left side. Tomlinson said he isn’t worried about Wilson whenever he returns to the field.

“The training staff has done a good job with him,” Tomlinson said. “We believe when he’s ready to go out there, he will be 100% ready to go.

“Zach is a special player with the way that he handles himself and operates this offense. We are really impressed with his work.

For us at the end of the day, we have to do our jobs up front and we have to protect the quarterback and we also have to open up holes for the running backs and that’s our 100% focus.”

During the preseason, safety Jordan Whitehead wore the No. 6 as he came over from the Tampa Bay Buccaneers during the offseason. Following roster cuts, he decided to change his number.

Whitehead is now wearing the No. 3, which dates back to when he was in high school.

“Going back to when I first started playing football, I started wearing the No. 3,” Whitehead said. “It has been so hard to get it ever since I’ve been playing.

Jets will have four captains this season

While the Giants announced they would have 10 captains this season, the Jets will keep it simpler and have just four.

Wilson, linebacker C.J. Mosley and cornerback and special teams player Justin Hardee will be the team’s captains. The Jets coaches will vote for a fourth captain for each game this season.